Original poster
Alright, random Imperial research ship, then maybe we'll raid a planet. Hive World's require a bit more troops. Merchant vessels on the fringes of Cadian Space, of remote outposts we can handle. Hive Worlds just simply have too many people on them. We have around 700-1000 cultist followers, but most are captive cultists of other Legion's whose minds have been melted by Metal.

If Redd or WMD don't post by Sunday, you guys can go again.
S

Original poster
I say we take the ship then drop it on a city.
K

Original poster
Do I get points for the deed if we do it? xD
W

why not go with the flow.

i havnt felt the rythm of the rpo yet, so dont feel like committing jsut yet.
K

Well, my liege, if you'd take some of thy valuable timing and devote it to such a thing, we could make watch it blossom.

WRITE! Lest ye disappoint the master!

EDIT: Oh, yes, I was dishing out orders in another post, but then thought you guys might not like the assignments. So, any suggestions, modifications, whatever, put em here.

Razarius, you will catch up to Damus, and bring him back. However, he is heading in the main direction of the Hangar. So, while Razarius is there, blow the fuck out of their ships if they try and flee.

Me n' Serbion are going to the bridge to deal with the "elites" of the Rogue Trader's crew and retinue. Kalas will block the way to the bridge and kill anything that tries to get past.

Alpharius and Omnibus haven't posted, so they will guard the ship docking, MWUHUHAHHAHAH!
W

Well, my liege, if you'd take some of thy valuable timing and devote it to such a thing, we could make watch it blossom.
Click to expand...

its not a time issue dude.

its that i've basically got writers block, thus i cant 'feel the rythm'
K

I'm glad to know that that is not what you meant. Alright, but you're on guard duty.
V

Vay, go ahead and build a staircase of corpses in the hangar. Don't leave any for GMK. Considering dealing out the points myself. I mean, he has like eight weapons, not counting, of course, the glandular Nurgle attack on his KHORNATE daemon. The Captain is worth 50 points, each of his retinue are worth 25. Slyen, if you take out the two squads (thirty Guardsmen) diverted to attack us from behind in a (believably) short amount of time, feel free to come and join us. Serbion will be having a battle of wills with the Navigator, Deio versus the Captain(and his retinue. :/), you can kill the bridge crew and then help Deio.

If anyone has points under 100 when we leave the ship, he will be summarily executed. With the exception of Omnibus, cause he's never on. He may become NPC. As will Alpharius, if WMD doesn't get down to posting. *Throws a empty toiled paper cardboard roll at WMD*

I'm putting a lot of power in your hands guys, dun abuse it. I'm throwing lines out there that may be a bit transparent, so I will give you guys a better of idea of what I see.

- Summoning Firema, the God of Inferno's, to blast an entire ship out of the void with a flick of his finger.

+ Cracking open a tank hatch, chucking a melta bomb in, beheading the guy who tries to defuse it, and running away.

- Cracking open a tank hatch, jumping into the space designed to hold three small pink flesh-bag humans, piloting the tank(from the undersized cockpit designed to hold a one and a half metre tall Guardsmen, not a three metre tall Chaos Marine) driving it up the ankle of an Imperator War Titan, up the leg, into the knee cap, dropping eight hundred melta's you were dragging behind you in a garbage bag, banister sliding down the stairs, sprinting win-like down the ankle, and getting away clean with a three thousand kill count.

+ Punching a lowly armored hive ganger so hard your fist goes into his chest cavity, and returns to show the ganger his beating heart.

- Punching the Daemon Prince Periclitor so hard, your fist goes into his pure warp essence, retrieving said essence, consuming it, and becoming a Daemon Prince.

+ Emptying an entire clip of bolter, smashing, and cutting with the chainsword, separating a arm from a Necron, and jamming it's gauss gun bayonet thing into it's mechanical brain, leaving it there so it does not heal.

- Blasting a Necron with warp energy, dissolving it completely.

+ Headbutting a Eldar into the abyssal chasm of Reimos, a Maiden World.

Oh, and I'm imposing a kill limit(Unless it's so awesome it merits rising above, like turning a weapon's platform around and shelling the fuck out of the mining colony's promethium supply. (After slaying half a squad of invading Necrons who emerged from the center of the colony and are now moving towards the Guard base camp a kilometre out, in order to reach the abandoned platform.

If anyone reaches that limit without merits, I will punch their firstborn.
K

Original poster
Rape post between Serbion and the Navigator, put it here or Spoiler it IC?
K

Original poster
well you already raped the navigator, I'm taking on a bunch of kasrgins
K

Original poster
:D There will be copious amounts of gore. Not all of it coming from the usual place.
K

Original poster
I guess you could say that last post blew the captains mind. *knee smacker*

Anyway, rape post when we get back to the ship.
V

EDIT: For once, Spoiler is actually a spoiler. 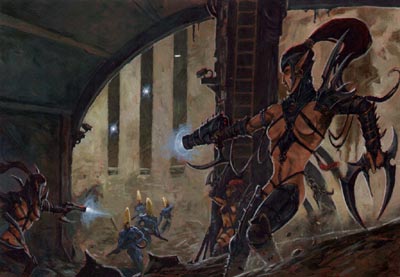 *fapfapfap*
So, before Metal Legion degenerates into a pit of hormonal rape scenes, GET BACK TO DA' CHOPPA and let's kill more things.
K

Alright, now that Kasteen was raped and Captain dispatched, make your posts retreating to the ship, take trophies, shoot things. Once everyone is aboard, I will make a post with the Ozzfather undocking and the Eternal warping right next to Orar IV, then plummeting through the atmosphere to kill 1.3 million citizens.

So, Deio will decide IC, but OOC, it is up to you guys to decide where we go next. Ideas?

We have slaves, enough for a bit, so Procuratious Quartet is satisfied. We need ships, recruits, and a planet for our own, which should come last.

We could land on a primeval planet and hold a Blood Tournament for additions to the Legion, possibly facing Genestealers, Dark Eldar slave raids, being tracked by other Chaos Marines, Tau missionary force, Ditto Imperium, Space Marine incursion.

We could map uncharted space, looking for a suitable planet. We could found a temporary hideout there(The Ozzfather needs repair) and form a cult of the populace there(most likely pre-warp, tribal civilization as well), for workers and slaves.

We also need to experiment on technology, make it more Metal. We don't have a Speed Marine yet but I plan to make one. >.> Someone get Odd to join as Kasteen(>:D) so I don't have to control four characters.
Show hidden low quality content
You must log in or register to reply here.
Share:
Reddit Pinterest Tumblr WhatsApp Email Share Link
Top Bottom