Original poster
I was typing a response when Wild Parents attacked!

I cast "Bullshit Out" but it wasn't very effective.

Warmaster: Okay, sure, Drumkit of conversion do it. Problem is, is that almost 85% of our enemies would be resistant, cause we're not fighting grunts, we're up against other Chaos Marines, Daemons, Eldar Reivers if we need slaves. Any humans would be cultists or renegades. Maybe a Inquisitor if we blow up something important. Which is probable...>.> But you might be able to sway like, one Cultist before they rush you(kekekekkekeke) In which you'd have to get down to slaughter. Psyker methods would be more effective. My suggestion would be to change it to area damage or morale rape.

Slyen, yay! We need a psyker. We have foot troops and a Primarch, er I mean "lookalike" XD.

If you choose to go with something else, I'll just make an NPC psyker and get attached to him, and underplay Deio cause the psyker guy is so much fun make like a Isador-Sindri going on. We also need ground troops. We have a Techmarine, a Assault Raptor Marine, A unspecified(Which reminds me, WMD, what class of Traitor Marine are you? Are you conventional Tactical or Thrash/Speed Marine? If you're conventional we will have no ordinary troops and all support...) Marine, a Scout Marine, and a Thrash Marine.

If no one tries a Speed Marine, I'll cry and make an NPC. I am also putting up our goals, in which to drive the story. Once the goals are up, we can do whatever we want, fight kill and rape anything to get to that.

EDIT: Goals are up. I put 'em in Latin cause Latin is cooler. To reach these, we will have to fall, even lower than Traitor Marines. Steal gene-seeds, mutate, experiment, delve deeper in forbidden knowledge. We WILL displease the Gods before they see what we can do to further their cause. The other Legions will look down on us, seek to squash us beneath their treads. We will fight, and Metal shall prevail.
K

With Kharn the betrayer being General Lionwhyte
K

Original poster
And what, Abbadon as Eddy?

Cause Dovinculus is a bondage pervert, therefore Slaanesh. I vote Fulgrim.
K

On topic mostly, from here on.
K

Original poster
yes, now we must decide on how to MAIM KILL BURN!
K

Original poster
Once Slyen puts up a sheet we will have the minimum requirement of characters. I'll wait a couple days to see if Asmo or anyone else decides to join, then put up the IC. If you want a specific way of being introduced into the new Legion, PM me. Otherwise with the first post, when everyone is in the hangar, I'll list them and where I found/recruited them.

OOC will be used for Out Of Character, obviously, and plottin'. It would be un-Chaos if Deio took suggestions from anyone except the Sorcerer, which, unless Slyen or anyone who plans on joining takes it, is going to be played by me. But it'd be no fun if I controlled everything, so IC Deio will make the decisions, and OOC we'll discuss the next steps in here.
W

Original poster
how is it that chaos marines are immune to the glory of metal.

should they not be even MORE receptive to it that emperor lovers and xenos?


and traitor marine IS his class.

he's an old school marine, from the horus heresy.
i dont quite know how he's gonna fight away from the drumkit, so i cant quite say which other one he is.
V

Original poster
I have bolter rounds and cold steel. I feel left out.
S

Original poster
I wasn't planning on doing a psyker...
K

Original poster
WMD: We are. But The Daemons screech in bliss at the sound of Metal, adding power to our muscles and servo-motors. Therefore we move faster and hit stronger.

Vay: Feel free to pick up a sonic grenade. But training In any of the instruments takes time. Tell the psyker or Deio you want to be carry the light of Metal, training will take a bit of time. Remember, you have the damage advantage against flesh, daemonic or otherwise. Sonic energy isn't physical, just intense energy blasts. Bolter rounds pierce armor, and their bullets EXPLODE! The only thng sonic really excels at will be maiming and knockback. Which is why we don't make Chaos Marines that join the cause learn a instrument right away. These weapons will work best against the true enemies, Emprah lovers. We're at a slight disadvantage against Chaos Marines, and so we need auxiliaries.

Slyen: Thats fine, go ahead and make whatever you want. I'll NPC the psyker and/or the first Speed Marine, depending on what you make.
K

Original poster
Double-posty ness, but peeps might have missed this.

I was playing Soulstorm, and I got all the Wargear and ascended to Daemon Prince, and I had you know, battle lust. So, it gave me an idea.

If everything goes well and the Roleplay ends up being epic, I'm drawing plans for a sequel. The Marine who makes the most epic/most kills(And I will ask for you to tally the kills at the end of every combat post.) by the end of the Roleplay becomes a Daemon Prince of Metal. And a de/summonable Scytheguitar.

Or if you really wanted another shape, go nuts. Anyway, just more incentive to describe your kills. During Combat posts, if it's against a NPC, compete for the coolest kills, then, in you're summary/ at the end of the post, put:

I'll add it all up with a calculator and a Wordpad file. Mind you, I will be competing too. 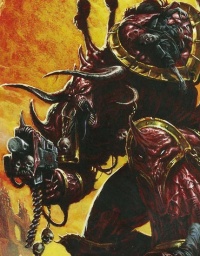 Original poster
grandness, now for a limitation here, I'll be imposing a rule, not kill totals but WH40k Points value of the victim killed.

Original poster
( Well here he is... Also I agree with GMK, points should factor into the count.)

<?xml:namespace prefix = o ns = "urn:schemas-microsoft-com:office:office" /><o:p></o:p>
Like in the picture, Kalas wears the Legion's older colors as all of the Fallen do.<o:p></o:p>

Personality: Smooth yet Bloodthirsty. Usually this shows itself in battle when a bloodlust seems to over take him. However he seems as if he is on a personal, albeit delusional, crusade. One that is everlasting against the Imperium.

Daemonic Presence?: No. He seems more cut off than from Chaos than most of the Fallen.

History: There isn't much to say about Kalas. He is one of the oldest Dark Angels being one of the Fallen. Like his brothers, when Caliban fell he was taken by the Warp. He emerged millennia later in the Age of Apostasy.<o:p></o:p>
<o:p></o:p>
When Kalas saw the injustice that the Imperium had shrunk to and how the Emperor had deified he knew Horus had been right to turn from his father. With this new mindset he made his way towards the Eye of Terror. Joining the Black Legion a hundred years before the 5<SUP>th</SUP> Black Crusade.<o:p></o:p>
<o:p></o:p>
Kalas was presumed dead in the wake of the Crusade by the Dark Angels. During it a Deathwing team was sent against him. Cleverly he disguised another of the marine and wiped the team by destroying the cruiser.<o:p></o:p>
<o:p></o:p>
He disappeared after that only to reappear during the 11<SUP>th</SUP> Black Crusade leading a strike of traitor marines against a Dark Angel strike cruiser, crippling it and stopping it from supplying reinforcements for one of Abaddon’s attacks. The ship was left crippled and lifeless as a message for the chapter, one they took seriously. However his craft disappeared in the warp, presumed eaten.<o:p></o:p>
<o:p></o:p>
The cruiser he was on however was spewed forth by the immaturium several years after the end of the Sabbat Worlds Crusade. Imperial forces in the area beloved the craft to be fleeing back to the Eye of Terror and attacked. On board the ship was immediately reclassified as a space hulk, it was drifting and minimal power was supplied to life support. Imperial troops boarded only to have the ship come to life.<o:p></o:p>
<o:p></o:p>
While they had been in transit the warp claimed many lives, all the while whispering to Kalas. Around him his fellow traitors gave into their gods, the immaterium changing or claiming most of them. However a few stayed as human in form as any Astartes could be, among the Kalas. When the imperial craft docked, they waited patiently. As the loyalists plunged into the depths of the craft, those that were devoted wholly to chaos fell upon them. Kalas however and his brothers that were still sane to a degree turned towards the loyalist craft and boarded it, slaughtering the imperials where they stood. They then took the craft and reentered the warp, headed for the Eye of Terror.<o:p></o:p>
<o:p></o:p>
Eventually he returned, meeting with Deio and joining his war band. The fate of those traitors that returned to the Eye of Terror with him is unknown.<o:p></o:p>
K

IC up soon. We'll be starting in the middle of combat, but it should be over quickly as it is in the Oros system, and not against Daemons. When Imperial response ships arrive, we flee back to the Eye of Terror, and on the border thereof, we then discuss the next step in here, but everyone will be blooded first.

Original poster
Here what the lexicanum has to say... I spelled the name wrong.. oops.

Orar is a Hive World in the Gothic Sector. The planet shares a name with the Space Marine chapter the Sons of Orar and their spiritual patriarch Orar, though the history of the chapter's founding is lost to Imperial records.

It was the site of an early victory by the Imperium against the Chaos fleets, reversing a string of victorious first strike raids, during the Gothic War. An Imperial battlegroup, led by Captain Compel Bast aboard the Imperious, stationed at Orar defended against a Chaos warfleet led by Warmaster Malefica Arkham on the Deathbane. The Chaos fleet was pursued out of the system and only a handful of Chaos escorts escaped without damage.
Show hidden low quality content
You must log in or register to reply here.
Share:
Reddit Pinterest Tumblr WhatsApp Email Share Link
Top Bottom