Original poster
I don't know if these are any good or if anyone will be interested but I have some ideas swirling around in mind currently and I'm hoping to find some partners who would be up for doing this with me. The bold is what role I am looking to fill, however it might be up for negotiation. Please feel free to ask any questions that you may have. I hope someone takes an interest in this, I'm so bored and need more RPs. :)

Before they were Avengers:
The plot's setting will be based before any of the avengers are actually avengers.

Iron What?!! (Tony x OC):
Whisked away from home at a young age, Anthony Stark finds himself living with new company. The company of the boys within the dorms of St. Johnson Boarding school. Great. He was surrounded by snobs, stupid one at that. This school was suppose to be for talented kids, really it was a school where parents paid a bunch of money so that they could claim there kids were special.

Time skip a month from that:
He had been there for a month and he found himself an enemy, a girl who went by the name Scarlet Jackson. In his opinion, she was the biggest snob there was. However, she felt the same way about Stark, he was annoying show off that tried flirting every girl. The two hated each other. Will things only escalate or will they discover that they have more in common when the two are shoved together in a science project?

My Oc:
Name: Scarlet Jackson
Age: 15
Personality: She is a head strong girl, who really doesn't back down from anyone or from a challenge. She is a very social girl and gets along easy with most people. Janette for the most part focuses on school and her homework, however she likes to part every so often. 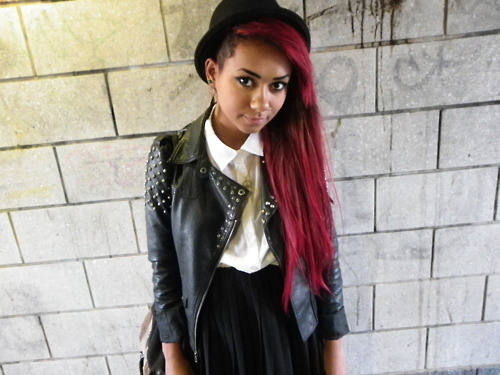 ​
​
Circus Freaks( Clint x OC):
The pink haired girl wasn't so impressed by the new comer known as Clint Barton, he was weird. Most of all he just didn't really seemed to fit in. The rest of the group must have thought so, yet he stuck around and was part of the show. It was great and all but she wanted to prove that he didn't have what it took to be apart of them.

Crystal made her way over to the archer, sitting down next to him. " Hey, goldielocks, you up for this job tonight? it's goin' to be between you and me.Though it shouldn't be a problem, just gonna break into a rich guy's house. So you in or not?" She asked, wondering if he would actually take it up or not.

My OC:
Name: Crystal Brown
Age: 20
Personality: She is only open to people she likes, which she doesn't really care for a lot of people. She tends to stick close to the people she likes and doesn't attempt to go outside of her group. She has a bad temper and is known to snap when people insult her or anyone in the circus.


Safe house(NatashaxPepper):
Natasha knew the moment she meet Pepper, she was the one who kept Tony in check and in line. The woman was practically his mother. Yet, the woman known as Black Widow loved it. Pepper was an amazing woman, Natasha sorta admired her. Maybe that's why she made a mad dash to save Pepper from a group of terrorist that kidnapped her and tried to get information out of her. After rescuing Pepper, they were now forced to camp out in a safe house. Now? Natasha was fighting off the urge just to tackle her into the couch and kiss her deeply, however she was unsure how Pepper felt about her. With the time that they are forced to spend together, could a relationship possibly form?

A Black Widow's thread( Natasha x Female OC):
Natasha doesn't work for shield at the moment, she's working for the Russian. She is spying on your character because your character works really close for the president. In fact, your character is the secretary for the presidents. Natasha and your OC meets at a ball. She thinks the best way to carry out her objective is to make your OC fall in love with her, so with the time she has that's what she is going to do.

Fun with Mutants(Wanda and Pietro x OC **Polyamory):
It had been two months since Pietro and Wanda Maximoff came to Xavier's School for Gifted Youngsters, they had escaped Magneto's grip over them and come to Xavier's with a lack of trust. For a while they kept to themselves, ignore everyone and didn't attempt to make any friends. One day a teacher forced them to sit down with your character and have your character tutor them since your character is smart. After that moment, the two became your OC's best friends. As time went on, the twins develop a crush on your OC and when they come to confess, both of them show up. Things get a bit heated, the twin end up fighting. So now your OC is left with a choice, go out with one of them and break the others heart....Or claim them both. (( **Side note: I hope who ever joins this one doesn't mind the twins showering their character in love and being a bit clingy.))

The avenger's kids ( Pietro's daughter (OC) x Tony's daughter):
I'm just going to keep this one short, I want our characters to be best friends at first. I want to focus on them being kids and such. Later on, we can decide if they commit crimes despite their parents being avengers or they go on adventures. Whatever we want. Also I think it would be cool if they develop a romance later now.

My OC:
Name: Star Maximoff
Age:16
Personality: She doesn't say a lot and keeps to herself unless it's with her best friend. She can be silly at times but prefers to act serious. She is a kind person. But don't let that fool you, Star has a thing for thrill. From fright to stealing, if it causes her heart to race, she loves it.