MC is a boy that just turned 18 in his last year of school he lives a lone he's a spoil rich kid but is very lonely no friends and parents don't care about him he try's to kill him self once but couldn't only ended up going to the hospital. His only friend in the world is a guy has talked to on the computer for a few years now this stranger knows everything about MC more then his parents even know. YC is the stranger he seems nice and friendly talking to him online but realizing the male left his laptop on quite often he hacked the webcam Now he can see more of my character. YC is mentally ill with MPD (or some other mental disease)the family doctor messes up giving YC the wrong meds and all hell brakes loose as he looses himself to his more evil side this side thinks it's a good idea to drive the 200 miles and kidnap MC to make him do what ever he wants. 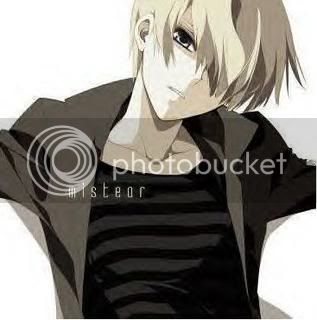 Werewolf rps
Setting will be same for both rps: a small town is home to werewolves the town has everything the werewolves need from schools to malls. Humans do visit from time to time but can not tell that the town is full of werewolves. The alpha is mayor. The town is surrounded by forest and 10 miles in the forest from all direction is the pack's entire territory. It's the start of winter but still no snow. Population of 100+ werewolves. All packs are ruled by their alpha but the alphas are ruled by the elders the wolf council and they make the true rules.

Plot 1 alpha and omega:
My character Ace is omega your character is the alpha's son and at age 18 he takes his father's place as Alpha. Your character and his friends have beat up on Ace for years for the fun of it knowing all his wounds would be healed by the next day. The day your character becomes 18 is the day he becomes alpha and will be able to tell who his mate is. The pull to your mate is extremely strong and almost impossible to ignore so what happens when he finds his mate is the omega that he has beaten on for years and that is own mate is terrified of him. What is going to do for if he claims the male then his life would be danger from the wolf council. Will Ace even except him as a mate for everything that he has done. (Mating ceremony starts with a bite that will put the biter's initials on their mate's neck as a claiming mark , the ceremony would be complete when the mate is bedded. And as far as any of the werewolves know a male can not get pregnant which is another key factor cause who would take over as alpha)

Plot 2 The Alpha's Bitch: same setting except alpha is not taken when age 18 it's taken when the old alpha steps down or is forced down. Alex my character is son to the alpha of a different pack except he is a bitch not alpha material. A war is ending with another pack over territory. Knowing both male and female bitches are very rare no a day and that the other alpha (your character) doesn't have one to bare his pups he offer's Alex as a peace treaty or trade to end the war and keep his pack safe. Your character the other alpha and is pack is almost like a pack of rouges who live wild still have houses but it's very secluded and more like a village then a town. Your character is also quite mean border line abusive to Alex who just won't defend himself. This RP starts on Alex's father's territory right at the peace treaty

Alexander was turned into a vampire at age 18 and has been 18 for many many years. He is normally. Rey careful not to get caught or found when he feeds. He messes up while hunting and ends up choosing a very high victim now vampires can not get drunk but drugs and other things in their victim 's blood can effect them. Very high himself someone sees Alexander feeding and calls the cops not able to think properly he is caught and instead of taken to jail he's taken to an mental hospital where YC is a doctor that thinks Alexander's behavior is medical not believing in vampires or anything like that. Can Alexander convince the doctor that he is vampire and what happens after he does. Or will Alexander loose himself to blood lust and kill the doctor.

Alexander is uki can be seke though but I'm more interested in finding a seme doctor to play with him.

Werewolves are known to be only in story books or in children's nightmares. Never would someone expect them to be real. Werewolves though are very much real they just never go near humans for the reason that humans are afraid of them. The packs stay in the forest where they hunt and live as a family the only preditor they have are humans called hunters that believe that werewolves should not be alive that this world is not ment for a non human to live on. Kuro is 17 years old the alpha's son in one more year he would begin to train to be an alpha when his father passes. But before that can even happen an storm comes during the middle of the night and with it came the scent of humans, gun powder, blood and death. Kuro watched as the hunters attacked and the alpha his father ran into battle ordering the rest of the pack to run. Kuro watched as the hunters killed his father while the rest left to hide being spotted Kuro panicked and ran in a random direction not before a bullet found it's way into one of his hind legs. He escapes to the city somewhere he's never seen and that werewolves were not to go. With blood lost he passes out on a sidewalk his black fur on his smaller sized body made him look like husky or hybrid wolf. An human guy walks by noticing the 'dog' and decides to take it home to nurse it back to health not even knowing that he was messing with a werewolf and an alpha at that.

Kuro's more female like then what you would expect to be an alpha and I need someone to play the human which will be the donament of the relationship.

100's of years in the future in the process of creating beasts of war, war wolves. They became too strong and had a unsatisfiable craving for human meat these wolves are the sizes of elephants and some even bigger. Strong, but dumb the creatures add up to the thousands and slowly the war wolves kill off the human population all over the world now hidden behind huge wall the entire human population is only thousand all living in one spot behind 200 feet tall walls. Army's of young warriors are trained as children of only 17 and sent to battle at 18 years old. After a brake through the wall a mysterious guy shows out of no where killing many wolves and is unvolunteerly recruited to the army ranks as a guard in teams of two he is super distant with his new fighting partner. The reason for this was simple he was a ace card. A experiment of his fathers with one drip of his blood one small cut would cause his body to turn and transform into the enemy the difference though was his mind he could think and knew he had to attack the war wolves he desired to kill the wolves and protect the humans. No one even knows about this secret at least not yet and what happens when they do find out.

Mc is Dark and he is the human that can turn into a wolf, seme

YC is the guy he is partnered up with scared about most things but very smart. Uke
J

I am quite interested in the last plot you made. I prefer playing submissive characters and I think this would suite me well. Let me know if you're still wishing to play that plot out.

Jackalbot135 I would like very much if you roleplay that plot with me. 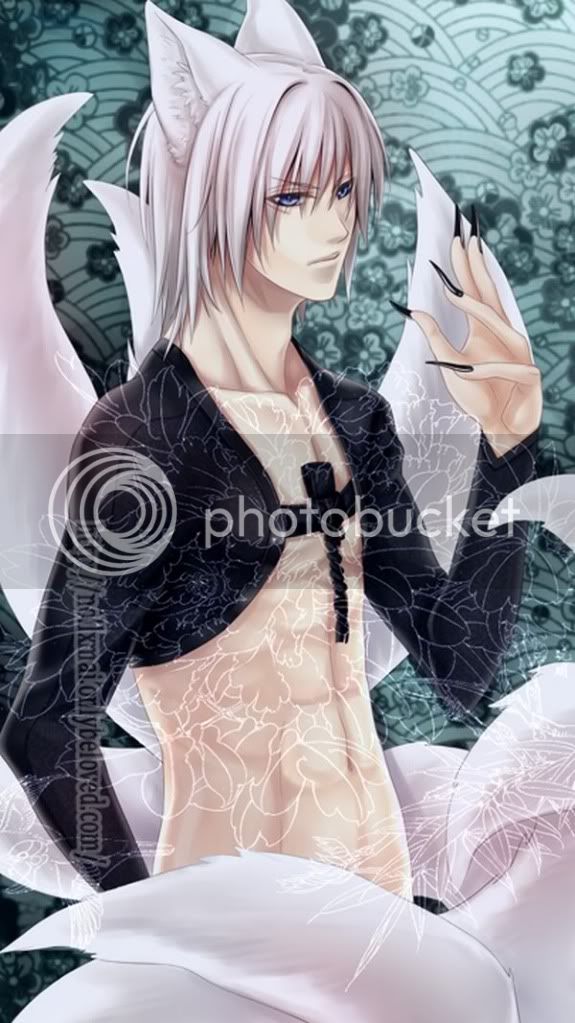 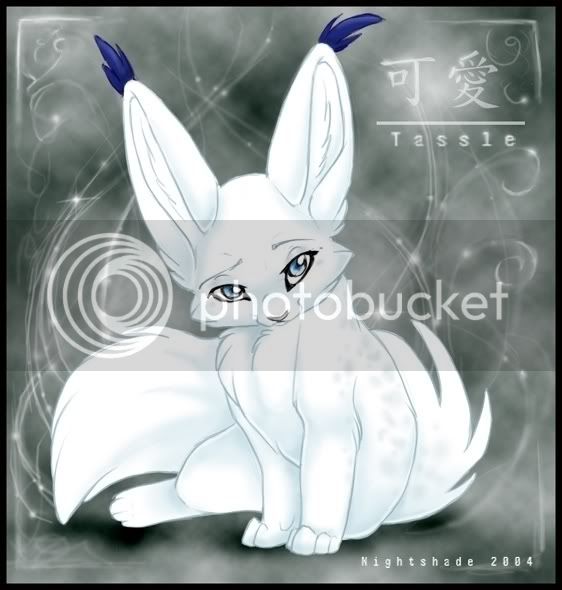 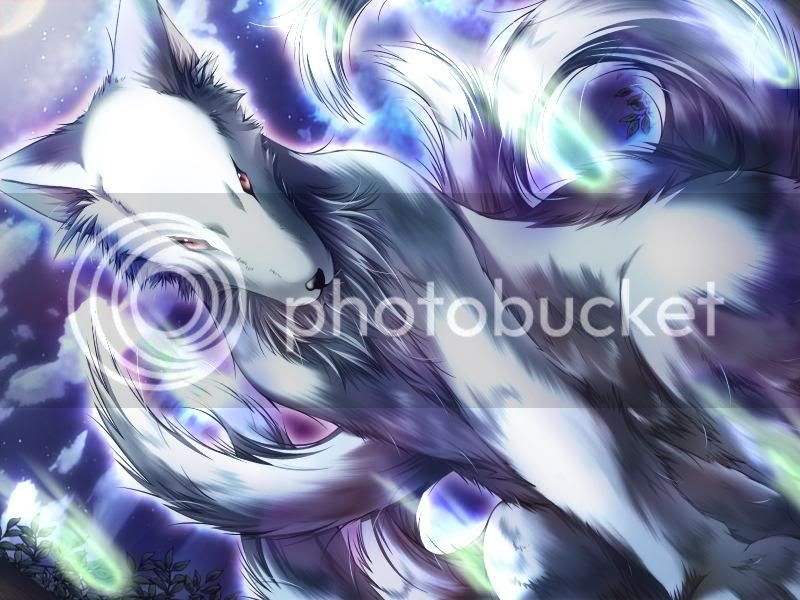 Name: Dya
Age: 18
Eyes: silver
Gender: male
Sexual position: bottom
Height: 5'6
Hair: silver long hair down to his butt often in a a pony tail or braided pony tail.
Body: small, slender, toned muscles from working out in the field, skinny you can see his ribs from father giving him very little food
Body characteristics: silver ears, silver bushy tail, claws that have been clipped
Likes: sweets, warm water, sleeping, sweet talk, being petted
Hates: pain, whips , cold water, being yelled at, dark, someone pulling his tail which is very sensitive, collars, leashes, shoes
Other: mother was human raped by a fox demon after he was born his mother became I'll and soon passed away. His step father beat and tormented the young demon and put him to work very young out in the fields. When scared he'll turn into a small fox and hide. When mad he'll turn into a large demon fox and attack. His breed is the only one known for the ability of male's able to get pregnant.

Looking for a king to dominate Dya's new life.

First post:
Dya was hard at work as normal useing the large ox to pull the plow as he pushed and steered it. He was so use to the hard labor by now. He had been doing it for years now. His father right now was at the market to buy seeds to plant this year. Dya's silver ears twitched as he heard a horse in the distance and saw the white horse that only the royal guards road. He set the plow down and walked across the field to see what the man wanted. Given an envelope the guard said was for him and his father he watched the man ride off.

He opened the letter but couldn't read the words on the paper he sighed and noticed his father coming back. He quickly crossed the field to his father explaining the guard and letter. His father snatched the letter out of his hand looking confused but just told Dya they were requested to come see the king. The father told Dya to go get cleaned up and Dya happily did so, happy to clean off the dirt from the work he had been doing in the fields.
Show hidden low quality content