You'd probably like to know how this whole war started... so I'll give you a brief summary.
Long ago, two friends became Mages. They both had their reasons... their goals... and their opinions. Despite their differences, they worked together, andbecame vastly powerful for it. Together, they roamed the land, going onadventures, completing deadly trials,and slaying ferocious beasts. They became famous, and world renowned,they were heroes, looked up to by all manner of people, peasants, knights, other magic users... there wasn't a person who didn't know their names.

One day, that changed, there was a disagreement or a fight... nobody reallyknows over what... and they split up.They trekked miles away from each other, created massive castles... they went in and locked their doors.

Ten years passed, and today... they both open their doors, and sendmessages all across the land. They are both raising an army of fellow magic users in order to claim an extremelypowerful artifact for themselves... theDemon Blade... a sword said to channel magic better than any wand or staff could even hope to.

To put it in summary... these two guys hate each other, and nobody knows why... help one of them get the Demon Sword, and you get a great reward.
The Guilds:
(Click on Guild Name to Learn More)
The Silver Owl Covenant
Morningstar

Now, both are hiring exclusively magic users... so it's best you know what thevarious magic users are. If you join, then you fall under one of these categories;

Wizards; They gain their magic by having magic in their blood... for example, Merlin, from thestories of King Arthur, was half demon. Overuse of their magic can tire them out, and even damage them.

Sorcerers; They gain their abilities by learning them over years of study. Big Hat Logan from dark souls is a good example, he was a character who became famous for his study ofsorcery. This can cause insanity if not used carefully.

Witches/Warlocks; They are granted their powers by making sacrifices to demons. A good example would be the three witches fromMacbeth. To become a Witch/Warlock, one must sacrifice their soul, then to use spells, they must sacrifice alchemical ingredients. Their demon normally follows them around as a familiar, and may or may not be able to communicate with others. It also doesn't have to be visible. (It can be anything as long as it isn't as powerful asthree polar bears.)

Clerics; They rely on whatever their patron deity is in order to use their spells. The disadvantage here is that they have to truly believe they can cast the spell they need. One bit of doubt... and it won't work. Clerics can use Dungeons andDragons core pantheon as their personal deity. But if you'd prefer to make up a deity, I can respect your character's beliefs.

And so here is the character sheet;

All Iwaku rules apply, and no killing unless both players agree. If you are too injured to fight, ask for assistance in ooc and we'll see what we can do to get you out.
Reactions: Jade 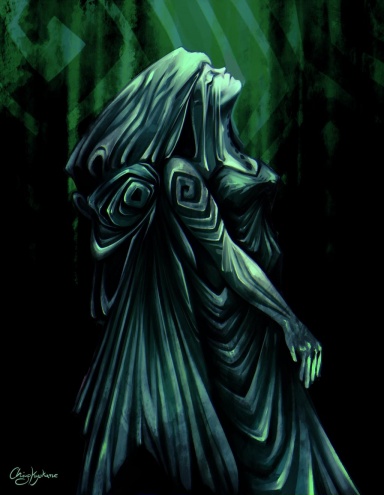