[DASH="#808080"]
[BG="#262626"]Game Master: Sakura
Accepting New Characters: Yup :D
Posting Expectations: Once or twice a week at the least~
Rating: PG-13/PG-16
Genre: Mystery, Horror
Atmosphere/Mood: -Depends on the characters involved-
Timeline: Current [21st/22nd Century]
Basic Plot: What started out as simple child's play could now cost you your life. Will you play along to survive, or step out of line and take the ultimate risk ? [/BG]
[/DASH]
S

It was a typical slumber party; watching movies, eating popcorn, playing board games, talking gossip. At least, for the most part it was. Just as everyone got ready for bed, seventeen-year-old Miyako suggested that they play a different kind of game. A game she called, M I D N I G H T - M U R D E R

A simple game to pass time. After writing "V" for "Victim" on three small sheets of paper and "M" for "Murderer" on the fourth, they're folded and placed in a pile. Everyone picks one and secretly takes a look at their "role". Then, you turn off the lights...

If you're a victim, your objective is to stay out of reach of everyone else.

If you're a murderer, you have to find a victim and tap them three times.

Once a victim has been tapped, they're supposed to say something like, "I'm dead!" or "I've been killed!" At this point, everyone else gathers around as the victim takes a flashlight in the dark and tells the tale of his/her death (makes it up for fun). After this, the lights are turned back on, and everyone sits in a circle to bring the "court" into session.

One by one, we cast votes on who we think the murderer is. When majority rules on a person, you check their slip of paper. If the person is truly the murdered, he/she is sentenced to death by the court & its game over. If the majority is wrong, then the actual murder springs up and mock-kills everyone else for dramatic and comedic purposes & then it's game over.
​
[align=left]
That was how the game was played...[/align][align=right]
But in reality, it was quite...different...[/align]
S

Five days later, Miyako Mitsuka, one of the girl's from the slumber party party is found dead. Rumour has it that she opted out of the playing the last game of the night. Crumpled in her hands, the police and investigators found a small scrap of paper. In a flourished scribble of a handwriting, it read the letter V; V for Victim.

It's all over the news, but no one knows how or why she was killed. The girls from the slumber party are completely confused and most of them refuse to put too much thought to it. Parental drama increases about students being outside alone after dark and everyone is encouraged to stick in groups.

It's in this way, that an unlikely group of people, staying late in school for afterschool programs come across a strange black envelope. Enclosed are a simple set of rules, for a game called, Midnight Murder...

You can play practically anyone~
A student, a janitor (could be their friend somehow), a teacher, possibly a detective (researching on the Mitsuka case as she went to that school), or any other person you can think of :)

Feel free to mess around with it as long as it goes with the story :D
​
CHARACTER TEMPLATE
[noparse]
[DASH="CHOOSEACOLORHERE"]
Name:
Age:

Occupation: [if student, what year ?]
Connection to Mitsuka Case: [if any]
Personality:
History: [~brief~just give us an idea of the history that affects the person's personality etc]
Death Scenario: [If your character was killed, how do you plan for he/she to die ?]
[/DASH]
[/noparse]


------Just in case I didn't make this clear ~
If you play, then you can't be the one who dies~ its always the person you described. But if you don't play, you might be killed...However, can you play with the guilt?
S

Original poster
*comedic sigh* Alright alright, this is the first one that I have really really really liked in a looooong time. If that means I have to play dice then so be it. I'll have a sheet up tomorrow.
N 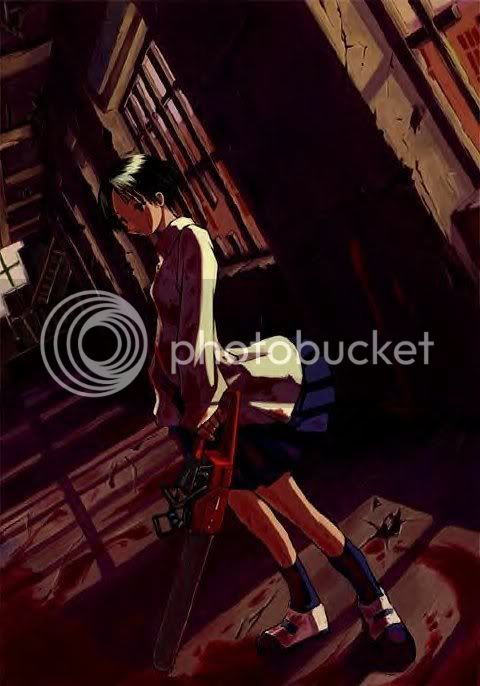 Occupation: Student; working through her junior year.
Connection to Mitsuka Case:A strange one, to say the least; recently Noriko's drawings have depicted events leading up to the death of Mitsuka with frightening accuracy.
Personality: Noriko is normally quiet and anti social, watching for the slightest hint of danger from anyone. She is prone to violent outbursts or prolonged periods of intense focus (mostly on drawing)
History:
Norkio was an art student, with a fine social life and a bright future ahead of her.

Until around a few years ago. Noriko went off the deep end, and is now a full-blown paranoid schizophrenic. Her parents keep good care of her, and she's mostly non-violent, but Noriko is a deeply disturbed young girl. Her drawings are filled with images of death, she keeps a knife within a foot of her at all times, and she is constantly worrying about threats, real or imagined. Noriko is allowed to go to school, and keep her weapons, as she's usually pretty stable. Usually.

She's cut her hair recently, so that there's less for someone to get a hold of. That should give you a good idea as to how her life is lived.

**By the way, after realizing that I never considered what big images would do to the image to the right layout, I changed it. Sorry for the trouble Miru <3
N

Original poster
Oh, sakura? you're going to want to make your rolls seperate, since they have seperate effects. If you just do 2d5, then it won't tell you what the individual rolls were.

You can add two seperate rolls of 1d5 to a post, so that would solve any problems.
S