"You! Old man!" A voice called out from the crowd. Standing amongst a gathered mass the singular individual in the center didn't respond. Instead, the man pointed around "It is coming." He spoke, the old withered stick clutched in his hand. The cane his only posession outside of the rags he wore. Where he had come from was entirely unknown. He had not been on cameras minutes earlier, only appearing once coverage had moved onward.

This enigma had alerted the location magisters office. Dispatched officers made their way to the now growing center of the crowd. "Old man! We are talking to you." An officer yelled once more making the old man's head snap unnaturally to the left. "You...." He pointed the stick at the officer calling to him. "You are worthless." The man said brushing off his comments with a waive of his cane.

"Alright, thats enough." The officer spoke moving towards the man "On the ground. You are being detained on the grounds of mag-" Was all the officer could say as the old man clubbed him on the side of the head with his cane. The blow crunched the mans head hard enough to knock him clear off his feet. "You can not stop it now.... but! It is okay for our old Lord is returning. The King will be with his subjects once more! You have all been ungrateful! Judgement comes! For us all!" The man said before taking a picture out from under his robes and tossing it out infront of him. "It begins!" He roared out taking a match and strikeing it. 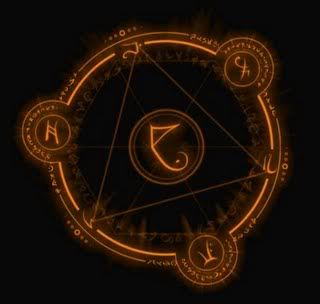 The act engulfed him immediately. Fire shooting down across his body and onto the ground. An unseen trail of fuel allowed the fire to shoot across the ground and ignite a symbol. The massive emblem began to glow, red initially before turning blue as the fire intensified. The man continued to stand there, skin falling from his body but yet he did not collapse. "Prepare ye selves... for it is done. Peace... at last." The man said before collapsing into bones. A blue essence burst forth and shot upwards before going into the ground.

One of the other cops immediately ran forward to check his self-functioning partner. Calling the scene into the radio the officer picked up the picture. "What do you have sergent." A voice called form behind. Turning the officer froze up "My Lord." The officer spoke. "No need for formalities... especially now." The man spoke. Adjusting his glasses the man surveyed the scene. "Find whats in that picture." he spoke to the officer. The officer looked at it "Why-" was all the officer could say before the man turned "Because you are being told to do it OFFICER."

Although taking several days, the location in the picture had been found. Deep in the apalacian mountain range far from most large towns. "Azarius, are you ready?" A voice spoke. "Yes, why else would I have for this place to be found." Azarius spoke stepped out of the transport. The military machine had been parked two miles from their intended target. Three other Striker vehicle ramps lowered deploying three squads of soldiers.

Azarius strode forward "Come, the agency feels this is necessary to investigate. I find the ramblings of old fools to be an annoyance." The man spoke as he walked ahead of the soldiers. The elf among men, the racial boundaries notable even there. Trekking for some time the woods suddenly opened into a clearing with the exception of trees dotted across the meadow. At the other end, a cabin that looked older than the trees surrounding it.

"What a fucking mess." Azarius commented as he walked across the meadow. "Disperse, secure the area." Azarius barked as he reached the cabin. Drawing his pistol he kicked open the door to only find webs, more webs than he had ever seen in his life. The cabin was trashed, the only semblence of anything inside was the skeleton of a man sitting over a bowl.

One of the soldiers came over "Area secured sir." The soldier spoke making Azarius nod "Of course it is, another wild chase for something that doesn't exist.". The soldier sniffed the air "Smells like, cabbage and... pork." The soldier suddenly said making Azarius turn his head "What?" he asked as the soldier pointed inside "The bowl is steaming." the comment only made worse due to the fact the place was more dead that a crypt.

"No, thats..." Azarius could only speak a few words as the blue essence that burst from the old man suddenly enveloped the skeleton. Blue flames erupted, but burned nothing as ligaments and muscles began to suddenly reappear onto the man, blazing into existence, the skeletal figure began to snap itself back into place. Without hesitating and without being told, the soldier began to fire. The burst fire erupting and striking the reforming figure. "No!" Azarius said trying to grab the soldiers gun.

The discharge and resulting impacts caused the ground to ignite around them. Trails of blue shot out in all directons surrounding the cabin. Linking to the trees and bouncing off them making a massive pattern out of the entire meadow. Flashing, the rune set itself just as the skeleton fully materialized itself. There, the old man stood once more "You have come... good. But... you now need to die." The old man said before a blast of blue erupted out from the cabin. The soldier firing was instantly engulfed, the essence dropping into the ground.

Azarius went behind one of the cabin walls as the old man stepped out. Putting his arms out he began to laugh. Like a voice unused for millenia it began low. The chanting, before slowly rising up. The soldiers around him began to fire in unison, their training showing as they pumped clip after clip into him only to have the wounds rip open but show no real effect.

"You die for all people... take solace in this." The old man said, his body starting to turn blue. Azarius stared, taking out his communicator the man instantly connected with his superiors "We have a classification Omega event! I repeat Classification Omeg-" The communication ended as a wall of blue flame erupted as the man exploded in a mess of blood and gore.

Flames consuming all as they erupted outward they stopped only at the edge of the rune. Azarius watched as the flame approached before being consumed himself. The meadow now appeared a sorched ruin, the blue flames continued to flicker before beginning to pulse. Cabin cracking the ground beneath it started to give before it collapsed entirely. Deep within the ground, the Wraith began to stirr... the sacrafice was complete.
​
@Alyxsandre
Last edited: Jan 5, 2018
Reactions: Alyxsandre
Show hidden low quality content
You must log in or register to reply here.
Share:
Reddit Pinterest Tumblr WhatsApp Email Share Link
Top Bottom