Hello there boys and girls, name's Aquakitty and welcome to my watery domain. I'm new to this site but not new to rping, though at times I tend to take a break from rping so my skills are still kinda terrible-ish. Sometimes I tend to get better as the rp progresses and sometimes I don't. Meaning that I can go from one-liners, to a few sentences to MAYBE a paragraph or two. I want to be able to have fun rps that'll make me want to go back and reread them over and over again.

Grammar: I am not a grammar nazi and yes we've all made quite few mistakes, so don't worry I won't rage on you about it. That wouldn't be fun now would it?

Mature: I have no problem with mature rps, so bring it on
I think that's everything so far..now onto the fun part! 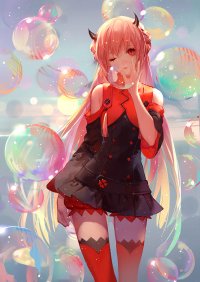 It says adaptable in your Resume in your writing levels.. Does that mean you could do a few paragraphs? Or is it more adaptable to the first two you listed?

More of the first two I listed. As I put in my op, I can go from on liners to some sentences and sometimes maybe a paragraph or two. It all depends really