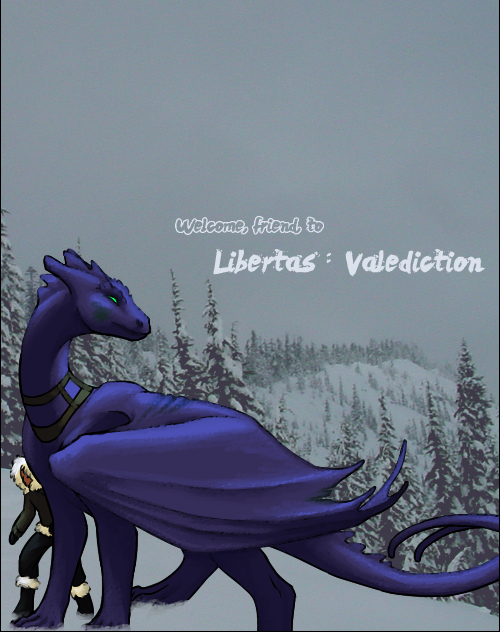 
Important Information :
Founded way back in 2008, Libertas is one of the longest running and more active non-canon DRoP sites around! It’s gone through several changes, getting massive makeovers and gaining/losing members, but has continued strong even through a site change! With plenty of action for all and a wide variety of character options, we’re bound to have something to please just about everyone! Come check us out on our site and drop us a line! We don’t bite (hard!)

Upcoming :
>> Gold Valkryth is about to Clutch!
>>Black Svaldifarixath has Clutched!
>> Something is stirring underneath the weyr… And it’s rumored some weyrlings and riders have gone missing… MAJOR plotlines coming up!

Background :
Libertas, a weyr built as a refuge for those considered not normal, strange… different… Created by a band of dragons who fled their home weyr, it flourished on the southern continent, separate from all others, peaceful and untouched. At least until the dragonriders of Amaris, the ancient enemy that had coursed them from their original home, began to sight them out once more. And then it was if the very world turned against the tiny weyr. The weather began to shift, turning far colder than before, turning the naturally warm climate into something frozen, and Thread began to fall harder and more often. Starving felines and whers attack holds beholden to the weyr, gradually turning them against the dragonriders…

Libertas Weyr, though small, has managed to scrape out an existence and thrive in the southern refuge where it fled from Amaris.

At least, until now.

Through a deadly morning raid, Amaris has wiped Azure Hold off the map and has forced Libertas to flee once again, taking with them the remaining survivors of their home to a place far to the south, deep into the Southern Mountains where cold reigns supreme for most of a Turn, and summer is barely a memory before it descends again.

But what kind of place is this eerily abandoned weyr? Where have the people gone and who were they?

What we have to offer :
>>Active administration and moderation teams, news teams, art teams, etc.
>>Frequent hatchings, be they pet or bondables
>>Frequent plots (both major and minor)
>>Frequent OOC events for the members!
>>Monthly contests, achievements and explorations for members. Our Achievements and Explorations are exclusive to Libertas and not only do they offer roleplayers a chance at prizes, but they foster activity as well!
>>Chance to play a candidate, dragonrider, wherhandler, or even a wild wher!
>>Incentives for joining.

(it helps us if you let the staff know who referred you, when you join us!)
Show hidden low quality content