Legacy of the 13 Demons


CONGRATULATIONS!
You have just been accepted to the prestigious Shinmen Takezo High School, said to have been founded by the legendary Miyamoto Musashi himself. We here at Shinmen Takezo High School, or Shinzo High, as the students like to call it, pride ourselves on not only producing highly intelligent graduates, but also continuing the tradition of the dojo. As such, our students may take an academic approach, or a martial approach to their schooling, based on their mental and physical test scores. We are proud to announce that you have been selected for the MARTIAL STUDIES program, which will focus in expanding your knowledge, while strengthening your bodies.​


Additional RP notes: Shinzo High is located in Tokyo, and all students arrive by train/subway. The game takes place in 2013. It is not required to be Japanese, or even Asian, to attend Shinzo High, though most students are Japanese.​


This game will be run using the BESM d20 system. You will need to find/download a copy of the BESM d20 Revised Edition handbook. If you do not already have one, or are unsure if you have the right version, let me know and I will get you a link to download the correct version.
NOTE: If you are a member of the Table-Top Tyrants social group here on Iwaku, a link is provided in the Source Materials discussion.​


What you need to know:
Allowed Races: Human and custom races(See Below in a few days)​


Classes: One person to a class. See the list of demons for available classes. The name next to the Class is the name of the demon, not the human host.​


Base Ability Scores: All ability scores start at 8.​


Notes on Prohibited Features: You may still possess these features, but only if you recieve them from your class. Regardless of whether or not you gain a prohibited feature from a class, you may not buy any prohibited features.​


Attribute/Feat Alterations: Speed - Replace MPH with +1 square
Teleportation - Must have relatively unobstructed path(ie. Can teleport from one side of a building to the other, but cannot teleport out of a room if the door is closed.)
Wealth - Can only buy up to rank 3. The money is owned by the character's family, and thus the character only has access to 1%.
Organisational Ties - Applies to various school organisations, such as Class Rep, or student council, etc.
Extra Arms - May only possess 2 extra arms.
Portable Armory - Must have Servant or Flunkie Attribute. Your follower(s) will serve as your armory.
Weapon Encyclopedia - Requires a related Knowledge check, but with a +4 bonus. Can also be used to learn about Special Attacks.​


Character Sheet​
Code:
As with every BESM game, and every game I run, I will need to approve your character before it get's OK'd. I will be a bit more strict for this game than you might be accustomed to, but this is simply because BESM is very easy to 'break', and even at low levels it can easily get out of hand.
T


Angels and Demons
The angels and demons are not what you think. The Angels represent and control the power of Faith and Trust, while the Demons represent and control Science and Knowledge. Without the Angels, humanity would advance rapidly, but lack of morals and trust, humanity would inevitably kill itself off. Without the Demons, humanity would come to rely only on the power of higher beings, never seeking to better themselves, and would eventually become stangant and die out. However, while humanity cannot exist without both the angels and demons, this does not mean that they get along. They are in fact in constant conflict, seeking to gain control over the progress of humanity. And all the while, humanity remains ignorant, save for a handful of chosen souls, known as Sovereigns. The 13 greatest of each side choose for themselves a host, and those hosts become the Sovereigns, and it is they who wage war.

However, recently there has been a change among the demons. Through their gathering of knowledge, they have come across the truth behind the two sides. In truth, they exist because of humanity. Without humanity's faith and knowledge seeking, neither divine race would exist. On top of that, humanity cannot exist without both Angels and Demons. However, not every Demon agrees with this, and those that seek peace between the two races now find themselves at odds with their brethren. With the next war set to take place within the next four years, the Nephilim as they are now known must convince not only their misguided brethren to lay down their weapons, but must also convince the Angels, or else all may be lost.


Additional Rules Notes
Ok, I've been reading over how AC works in BESM and I've decided that instead of the standard +10 that everyone gets, it's now +1d20. So your AC, for now, is Dex+1d20. You roll this 1d20 every time you are attacked.
Reactions: 1 person
N

Original poster
I'll be taking the shapechanger demon, if nobody minds.

Primary strength will be strength. Lots of strength. Going for a sort of trickster character.
T

I can has mecha pilot? kinda like the human here but with technology.
T

Original poster
I'm not yet finished with all the details. The basic jist of the meha pilot is that he will summon his mecha to fight with, only it'll be a bit more golem like, as opposed to gundam like.

Original poster
Basically, yes, a giant made out of stone. Though more like Alexander, the Guardian Force from Final Fantasy 8.

Original poster
I take that back. That's what the Angelic counter-part's mech looks like.
Yours will look like this: http://dicemonkey.files.wordpress.c...i-fi-3d-lowpoly-mech-robots-collection_09.jpg
Of course, depending on how you I customize the weapons and such, there will be some minor differences.

I'll be building your mech for you, to help keep things simple, and so that I can keep you on a level similar to your angelic counter part.
L

Attributes(Please include Rank and Cost per Rank)​

Defects(Please include Rank and Refund per Rank)​ 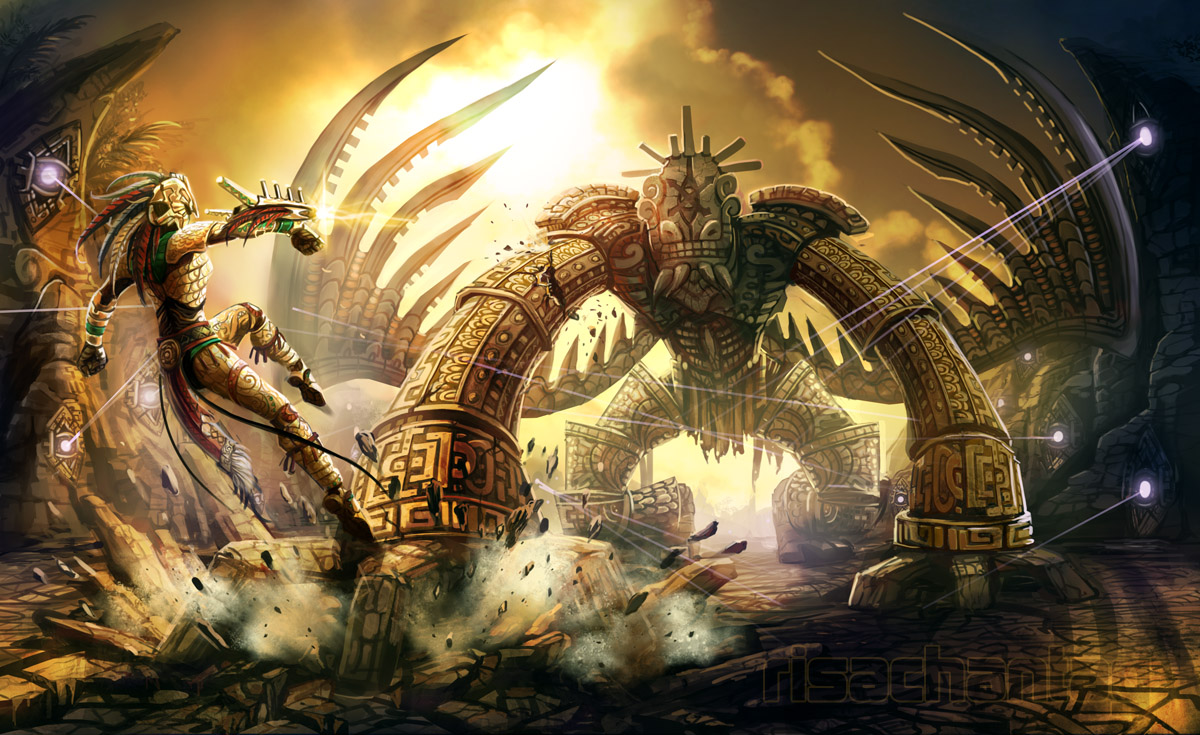 Backstory: Pyotr was born in central Mexico, on the island Tenochtitlan, the center of the Aztec empire, which his parents studied all their lives. His parents were archaeologists, studying the Aztec's and their ancient temples and caves. His parents, however, were Russian, and gave him a Russian name as well. They explored all around the world, for conferences, and other non-Aztec ruins they were invited to excavate and research. Of course, they took Pyotr with them, wherever they went, he went along for the ride. When he became old enough, he began to research and excavate with his parents, forgoing a traditional education, to study abroad, his parents teaching him all he would need to know and more.

He was, one day, researching a newly uncovered Aztec ruin, deep underground, as it caved in, and he just barely made it out alive, but he was pinned under rocks just at the entrance of the ruins, crushing his legs, making him a paraplegic, reserved to a wheelchair indefinetly. This, however, did not deterr him from his studies with his parents.

Along with the mail, Pyotr recieved an invite to the Shinmen Takezo High School in Japan, a world renown school. With his parents blessings, he transferred to the school, hoping to learn more than what he knew about Japan.

Personality: Pyotr is a very strong willed individual, very tactful, and wit as sharp as a razor. He is, as well, very fun to be around, him being a bit on the eccentric side, and never at a loss for words, and always has a topic to discuss. However, he can be moody at times, especially when reminded of his handicap harshly.

Additional Notes:
Sustainable
-2 Slots
-Can continue to sustain beam on target.
-Cannot Move while doing so
-Must roll an Attack Check every round while sustaining beam
-If attacked or distracted, must make a Concentration Check, DC10, or the beam stops
-Can Switch to different Target w/o Recharging
Reactions: 1 person

Attributes(Please include Rank and Cost per Rank)

Defects(Please include Rank and Refund per Rank)

Born in Melbourne, Australia to english immigrants he studied Japanese as a secondary subject and entered an exchange program during primary school and decided to return applying to several high schools and being accepted into Shinmen Takezo High School. He arrived in Tokyo just over a month ago and already has had his motorcycle shipped over.

Seemingly oblivious to danger he'll face down any challenge as if hes guaranteed to win easily. it is clear e believes he is the obvious leader in any situation and can be considered arrogant at times though makes a very loyal friend who would put himself in harms way to protect a friend even if its because he believes he'd just get them both out of harms way immediately afterwards but hes not above offering encouragement and letting other do things if it fits with his plans.

**Name: Crimson Palm
Damage: 15d3
Critical: Special
Type: Energy
Range: Melee
Rate of Fire: Single Fire
Magazine: 1 Shot
Cost: 40
Notes: This attack can only be used the turn after successfuly Grappling an opponent with a Grapple Check that succeeds by 5 or more, and does not need an actual Attack Roll. This attack uses up all power in the mecha, and thus can only be used once per encounter. Mecha requires 10 minutes to regain enough power to move.
-If you Critical Hit on the Grapple Check (Natural 20), then Crimson Palm is considered to be a critical hit
T

Ok, Frost, use the DnD Sorc's Spells Per Day and Spells known. Now, when you manifest your demon, it'll manifest as a lexicon, now whether it's a floating digital screen or an actual book is up to you. Now, you can learn more spells, in addition to your Spells Known, through research, which will become available later in the game(My way of saying I haven't worked out the rules for it yet). In order to cast a spell, you must have the lexicon open to/displaying the incantation. In order to look up a spell, it takes a move action. It takes a standard action to cast the spell. Also, you can turn to a random spell as a Swift Action (Can be used any time during your turn. Only 1 per turn). You can also cast as an Immediate Action(Any time during the round, 1 per round), but the spell is only half as effective (All stats, including range, damage, duration, area, etc. are all cut in half).

Original poster
Ok, it doesn't look like Zero-chan will be able to join us, so once I get my samurai up, we'll get going.

So you want me to treat redd how Kamina treats Simon?
T

Original poster
No. Motivate him, encourage him, etc., but use a gentler touch. The dude's in a wheel chair after all. However, feel free to treat the rest of the First Years like Simon.
T

Original poster
Who all is still up for this? Because right now, we have two characters, plus me. It looks like it's failing before it can get started.