Original poster
So here's a for fun little thing I'm doing with a new program I got. Here's a 5 color 1 cycle spoiler for everyone. 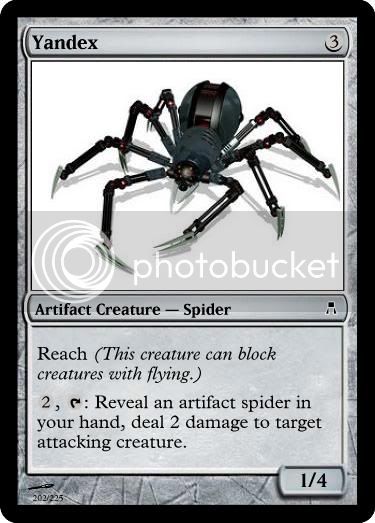 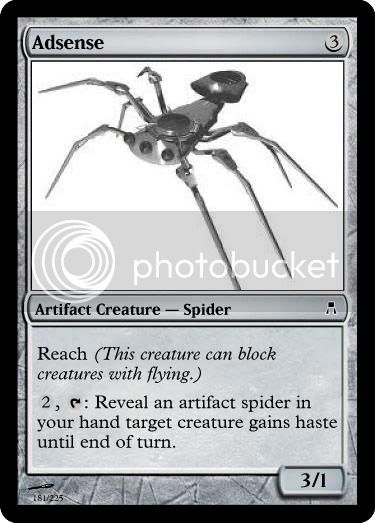 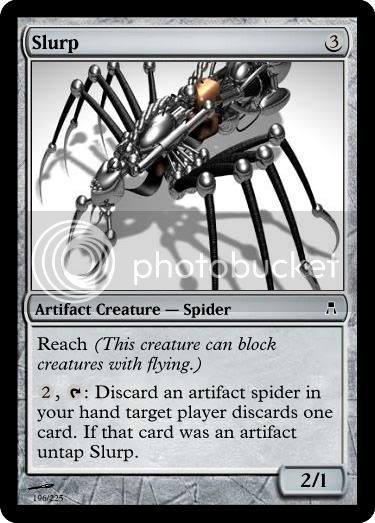 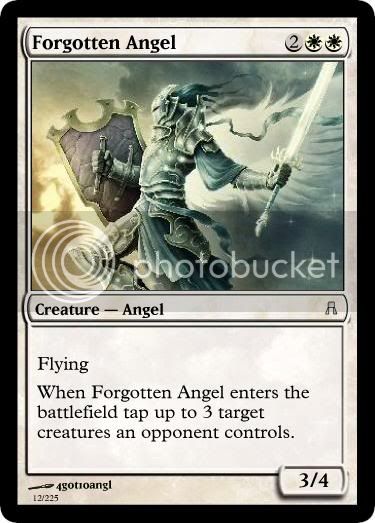 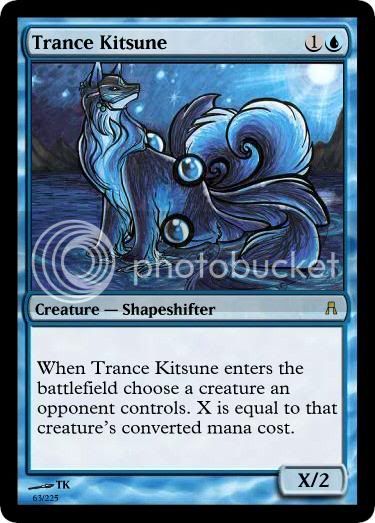 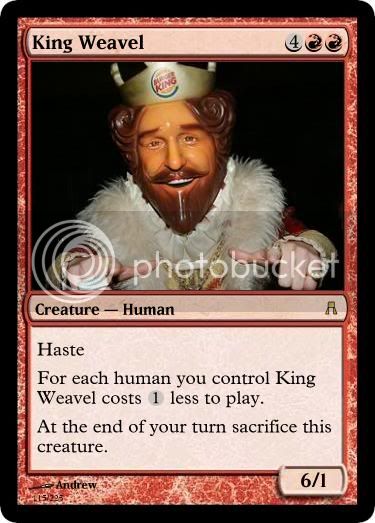 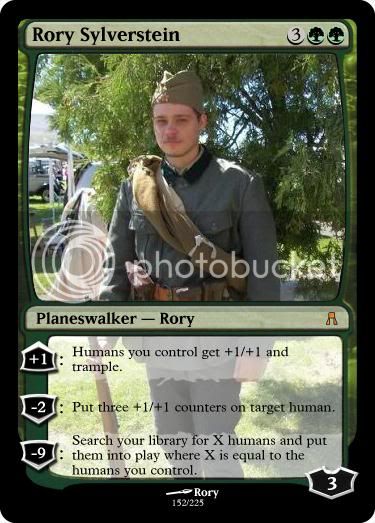 Rest of the set I'm working on but there's the very first glimpses of it.

That is Badass Piro!
W

Original poster
Well seeing as there is some interest I will continue with another color spoiler. This time it will be of 5 commons. 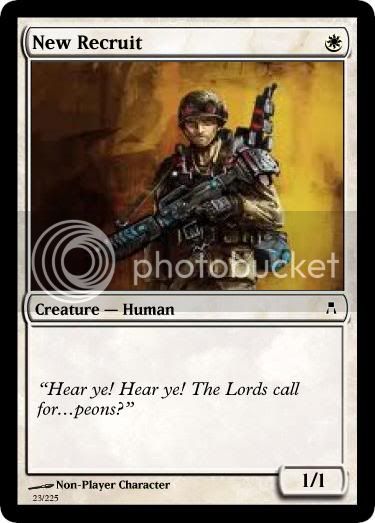 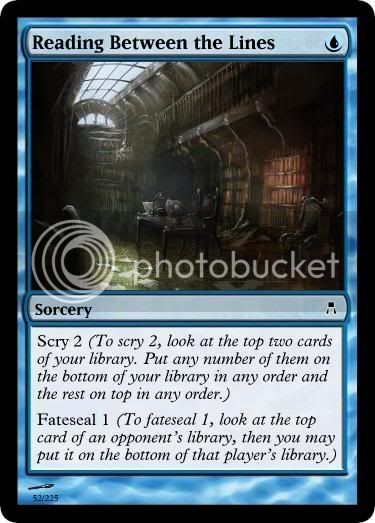 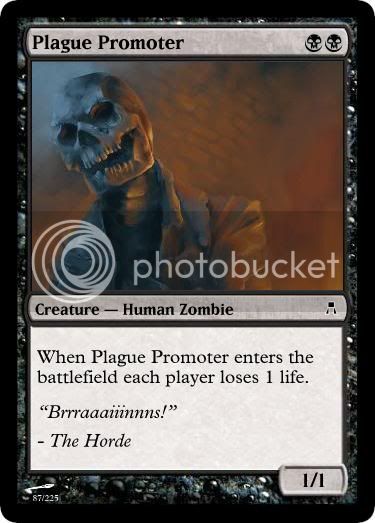 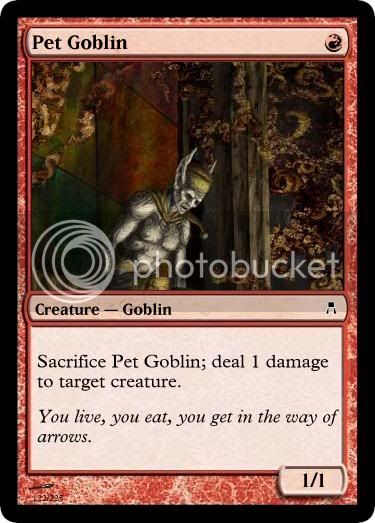 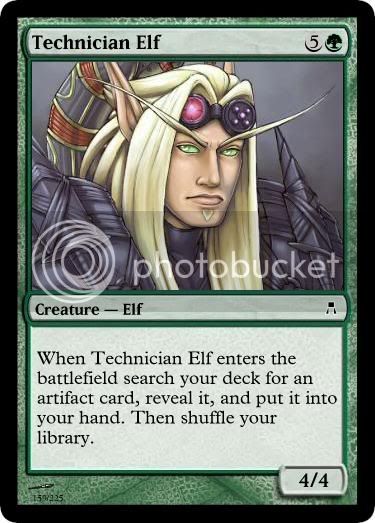 [EDIT] If you have a request for what color you would prefer please make note of it either in this thread or PM me.
P

Original poster
Now just to show you guys I'm not making this set too soft I shall reveal unto you this lolbot. 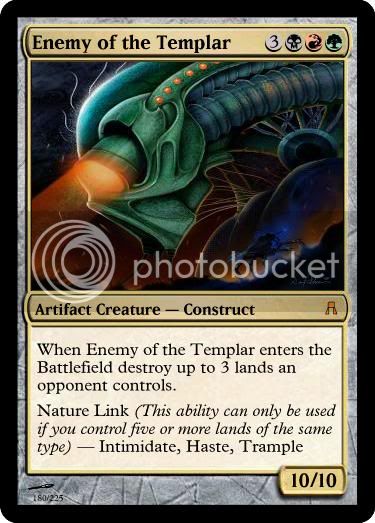 Original poster
;__;
I promise to talk MTG with you and reveal my innate nerdiness if you'll make a Kitti card.
P

Original poster
Sure just give the general information (Color, what you want to generally do, Supertype, etc.) and I can get to making a Kitti card.

ha-HA! Finally! What program does this again? I've been meaning to start my own version.

By the by...I'd totally be black or blue methinks.

I am currently debating effects.
P

Original poster
Well to bring up a text spoiler I actually had you green as the Opposing force to Rory's Green guys. But I can change your color and put someone else there.

As far as the program I'm using, it is Magic Set Editor (MSE) and it has a good default for card styles. You will have to download the template off their site for Planeswalkers though. In which case you download the template and then use the .exe and it automatically unpacks the style into the MSE folder you have in your program files, really simple.
P

Original poster
Well because I'm just happy I breached 100 cards today I'm going to give you another spoiler. This time it will be of two Main Force guys. 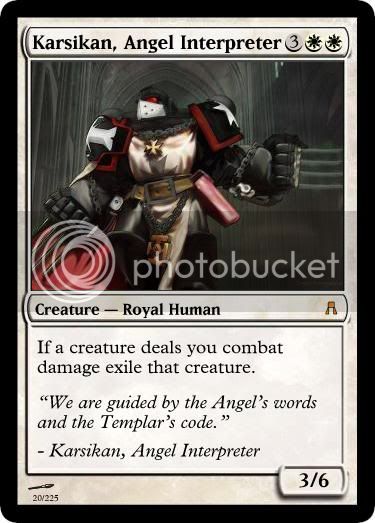 So there them two are. I got two days off so I'll be using them to complete the rest of this set and then the big spoiler of the entire thing.
K

Original poster
Aw, you had white slotted already? Darn. I chose white because my pet deck is gray.
F

Kitti said:
Aw, you had white slotted already? Darn. I chose white because my pet deck is gray.
Click to expand...


Well I had the main guy slotted already. For each of the colors there is actually a Main Guy, an Artificer, and an Opposing Force of the same color. And your own card you sent through pm was labeled as an enchantment and it will see "print" in this first set. But as far as members themselves go, don't be discouraged if you don't see your name in this set, remember blocks come with 3 seperate sets.

FOLKLORE MEMBER
Eeeeeee, MTG. ;_;
I so used to geek out with this. =3
Actually, I still play the XBox Arcade version of it. =3
Green/Red deck for the win. =3
Miru may have a card?
Oh, aren't there cards that like...link up with other cards?
Like duos and stuff? =3 Piro should try those. ^o^
Nice job, though! =3
P

Actually that's something like Yugioh. As far as Magic the Gathering goes, synergy is the most important thing and this set is looking very monocolored synergistic. (Of course you can combine colors but they don't interact with each other as well as a full monocolor deck would.)

Now the set itself is now up to near 150 cards, this means I'm 60 cards away from Block Introduction Set minimum. So the full set will be shown within the next two days or so.
W

Original poster
Black mate. undead is as undead does!
P

Against Your Thought RUU
Instant
Kicker RRU
Counter target spell. If the kicker cost was paid, you deal damage equal to the total casting cost of the countered spell to target player.
"Oh yeah? Well... So's your face."
P

Against Your Thought RUU
Instant
Kicker RRU
Counter target spell. If the kicker cost was paid, you deal damage equal to the total casting cost of the countered spell to target player.
"Oh yeah? Well... So's your face."
Click to expand...

Thank you very much for the input. I was looking for some mulitcolor cards to do. Might not be exactly the same in the end product but I can get everything as close as possible.
Show hidden low quality content