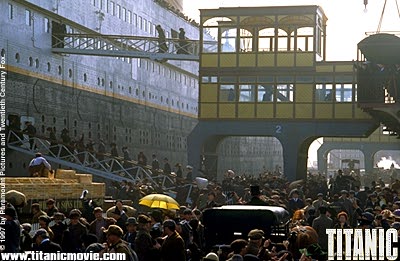 Anders pushed his way through the massive crowds, he was impressed at just how many people were actually going to be on the ship. Of course looking at her he felt that she would be almost a bit empty. Shaking his head he picked up his suitcase and violin case and headed towards the second class boarding area with his pass in hand.

This is the start of my new life, I'll be heading to New York and will become a famous violinist. I've already said goodbye to Kristiania, and now goodbye Europe I guess. The whole energy in the air was that of excitement and adventure, to secure a spot on the maiden voyage of the most fantastic and luxurious vessel to ever grace the Atlantic.

Anders walked up the plank towards the middle of the ship, the ticket taker smiled to him and took his ticket.

"Welcome aboard to the RMS Titanic Mister Eiker, have a pleasurable cruise." The man nodded and pointed towards the interior of the ship, where Anders was to head. It truly was a miraculous ship.
K

[size=-2]
Sorin embraced Tedryn heartily, trying not to think of everything that he was leaving behind him to go on this trip. The pain of leaving behind his mother, father, and brothers was aching enough but there was also the matter of leaving behind Ted, who was as much his best friend as his brother. The wind caught Tedryn's already mussed orange hair and ruffled it further while Sorin tried to capture every detail in his mind so that he could keep it and cherish this memory until he could afford for Teddy to come and join him in New York.

A loud noise coming from the ship brought Sorin back into the present instead of his attempt to immortalize each strand of hair covering Teddy's forehead or the exact placement of each rebellious freckle that stood defiantly out against Teddy's milky skin. Sorin hoisted his duffel bag over his shoulder and continued toward the Titanic with a golden bubble of hope protected carefully in his heart alongside the pain of leaving Tedryn behind in England. For the millionth time, he considered simply not going, staying here with Teddy his entire life, but in the end he was standing before the enormous ship with wonder in his eyes and fear weighing down his heart.

"You'll be fine, little brother," Tedryn told me, breaking through their silence with words spoken almost as though he were reading Sorin's mind. He tousled Sorin's hair with a casual movement before pulling back with a serious face. "If things get too bad, don't hesitate to ask me for money. I can't go out there and force feed you blood pudding when you've not got any food."

The brothers exchanged a final hug and Sorin did his best to keep from crying. Tedryn proceeded to make jokes but when the time came to say a final goodbye, he solemnly removed his cap and placed it on his brother's head. This caused Sorin to tear up a little but he merely waved once more and stepped onto the boarding ramp where he presented his ticket.
​
​
[/size]
F

People in the crowds began to move so a pathway could be formed for a car that was arriving. It honked to signal it was going to keep moving, though its speed decreased since there were civilians were about. Nathalie was riding in the backseat, smiling in amazement at the Titanic when it came into view. Doubtlessly, there were people outside either irritated with her fancy arrival or curious; if not a combination of the two. She wouldn't have protested to walking... Her parents just wanted to be certain she was safe. Until their dying day, they were looking out for her.

The car came to a stop when it wasn't permitted to go any farther, the driver stepping out to walk around and open the door. Nathalie's silky gloved hands reached into her silvery coloured handbag so she could fish out some cash to pay this driver. It wasn't required since he was already paid, but she wanted to tip him for his services. Once the door opened, she took him by the hand and left a few bills into his hand once she steadied herself on her high heels.

"Merci, monseiur," she cooed, tipping her lovely hat like a man would do. She idly wondered if she should have thanked him in English but he seemed to understand her. The driver chuckled with amusement and stepped out of the way so she could make her way to the ship.

With her suitcase in one hand and her purse on her shoulder, she walked proudly towards the appointed entrance. All her other belongings would be waiting at her new home in New York, so she packed as lightly as she could. When she stopped in front of the ticket taker, she pulled her ticket from her purse and handed it to him with grace.

"Enjoy the cruise!" he said, doing his best not to stare at her stunning beauty. She made a feminine giggle and winked at him before walking in so she could find her room. Once she was settled, she hoped to find a person or two, or more because more was merrier! Nathalie wanted to celebrate, drink, take risks... She intended to have a wonderful time.

“I assure you ma’am, your valuables will be safe with the White Star lines. Just keep a hold of this slip and present it to the clerk once we reach New York, or if you want them returned during the voyage. Please enjoy your trip to New York aboard Titanic.” Eric said to the woman in front of him handing her a small slip of paper. He inwardly cursed himself. That was the third time now that he had almost said Olympic.
<?xml:namespace prefix = o ns = "urn:schemas-microsoft-com:office:office" /><o:p></o:p>
“Different ship, different crew” Eric muttered to himself adjusting his uniform. Still, business was good; the excitement of the passengers was infectious. Even the crew was excited, and there were rumors that they were going to set a new trans-Atlantic record on their first voyage.
<o:p></o:p>
Eric wondered how "Ricky" Pascoe was fairing. It was due to Eric that Ricky was able to sign aboard. Hopefully he was doing his job and not exploring the length of the ship or bouncing among the corridors. Eric had promised Ricky’s father that he’d watch over the kid and insure he stayed out of trouble. Still, that was slightly difficult to accomplish when he was stuck behind a desk.

‘Ah well...’ Eric thought, Ricky was a good young man. He’d turn out fine; the trip would set him straight.

Eric looked at the next person standing in front of his desk and smiled.<o:p></o:p>

Alice Smith walked with her family aboard the massive ship. She had never seen anything like it and was bounding with limitless excitement. She had been told by her father to stick close, but she wanted to explore and to see what was happening around her before the ship embarked on its voyage.

She found the sea beautiful, and to be able to watch it on this trip would be exquisite, so as she walked with her family, she kept her head on a swivel and took in the sights of ship. The colors and the architecture was marvelous and she couldn't wait for it to begin. She carried a suitcase with her and somewhat struggled with the weight of it while she walked, though her parents dutifully and easily carried their bags. Was it because she carried much more clothing than they did? No, truthfully, she carried less clothing them they did.

The day was beautiful for a trip like this and their travel to the ship itself had been a little hectic. But now it all was behind them, and they could now travel to places that they had been to before.

Alice was excited for the time to come and wanted nothing more than to start their travels now!

Anders found his room rather quickly it was a comfortable room, a small bed and a desk, nothing terribly extravagant but enough that it was comfortable and classy. Another sound of the horn let him know that they'd be pulling out of port soon and he wanted to get up on the deck to wave goodbye to all the people, sure his family wasn't around, nor anyone he really knew but he'd at least like to join in the festivities.

He quickly put away his things, including his fiddle and stepped out of his room and headed to the main second class stairwell, passing a woman with far too many suitcases for her own good. He was about to step passed but he couldn't help but return.

"Excuse me miss, did you need any help with those?" Anders flashed an award winning smile and extended his hand, expecting her to hand some of the luggage over. "Where are the porters? I suppose the fabulously rich need them more then we do, at least we have a couple." He smiled, seeing a couple walking by, a porter with a couple of suitcases just ahead of them leading them to their room.

Alice nodded to the man and let him take a few of the suitcases. She was a little surprised with his willingness to help her, but in the end, she was thankful that at least someone had decided to give her a hand and was quiet for a moment while she tried to come up with the proper words to say in greeting to this man. They precariously walked past other passengers of the ship while she tried navigating the way to her room. Most of the time, her parents would probably just remain in the room, due to the fact that they apparently had been aboard ships before, and merely wanted to relax. Though she was allowed free reign and time to explore, so she surely wasn't complaining one bit.

"Thank you for the hand, I don't know what I would have done if you hadn't come along to help." She said as she smiled slightly as she deposited her bags and then looked up at the man, already noting the fact that her parents had come and put their things in the room and were already holed away. Already, she was able to fulfill her curiosity. "I don't have much to do right now, and I'm afraid I'll get terribly lost if I walk around on my own, so would it be too much of a bother if I asked as to where you might have been heading?" She asked quietly.
Show hidden low quality content
You must log in or register to reply here.
Share:
Reddit Pinterest Tumblr WhatsApp Email Share Link
Top Bottom