Original poster
Kyōkai World is a universe roleplay that starts in the medieval fantasy era, riddled with mystery and wonder. This roleplay has many anime tropes like comedic relief, awesome action scenes, romantic encounters, evil plot twists, and even short ecchi slips. Similar to the popular anime ''Angel Beats'' where most people i know has cried in the end you too will cry in moments of melancholy. Similar to the popular anime ''Kill la Kill'' you will laugh and see awesome action with a small bit of soft core ecchi whenever it calls for it.

Now for the history of the roleplay where everyone will start off! 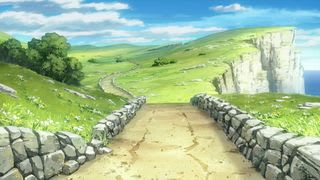 In a far off land named ''Elderhyme'' resides vast amounts of green fields absent of trees, long but thin dirt roads bordered with small white rock walls that extend to large cities and even the most infamous small villages. Although this land is only a mere island it is one of the most largest, majority of the beaches has been flooded due to years of unexplained water percentage growth. Hills eventually end abruptly as it immediately falls down forming a cliff (as seen in the image above). Regardless of the lack of trees there are many animal life such as goats, horned cows, deer, buffalo, bison, and even birds of all types. Don't be fooled there are also dangerous animals too, however not as much due to picky and weird hunters who only kill the threatening ones... why do these hunters only hunt specific types of animals? no clue, why not ask them yourselves? These dangerous animals are like tigers, lions, sharks, and only seen in this area, large horned dragons.

Take upon your large and endless adventure as you wake up in a small village named ''WheelVille'', known for its immensely complex wheel work devices that turns sea water into drinking water and wheel powered energy plants that keeps the lights working in the village. You don't know how you got here nor do you know each other yet although soon after you walk out of the inn you all meet each other in the lobby, asking each other questions and with time joining up to travel to the castle named ''Royal Seaver'' to meet the queen.

What happens next? What might be the evil power in this roleplay? who's the main antagonist? And most importantly why are you in Elderhyme? Join my roleplay and find out as the story will unfold as you play.

Crow said:
Looks simple enough for me. Let's roll in!
Click to expand...

Awesome, Thanks for joining! :)
D

Original poster
Sounds like a fun and relaxing romp. Count me in.
C

Original poster
You have snagged my interest. I'm guessing fantasy races (orcs, exc) are a no right?
K

Awesome glad to have you join us! :)


Crono said:
You have snagged my interest. I'm guessing fantasy races (orcs, exc) are a no right?
Click to expand...