Original poster
Sup childrens, old auntie Koori going to San Diego ComicCon and this shit for the kids who wanted to go but couldn't. So here's where they can vicariously nerd out through my fatass.

This shit gonna be picture heavy y'all. The confloor JUST opened so pictures forthcoming... but lemme gloat right quick

Original poster
... HOW IN THE FUCK DO I UPLOAD FROM FONE. oh well just upload this shit when I get home

Original poster
Yes, yaa, can do, nah u search for urself.

And because jared and Diana don't need that hassle on the server, here's all of Wednesday's Preview Night photos with captions:

Original poster
... I ALREADY DID, ASSHOLE. 10 BUCKS, I SAW THAT SHIT AND DIDN'T EVEN THIN ABOUT IT.

EDIT: In order to attend ComicCon for free (because a four day pass went from 60 bucks back in the day to a cool 300 now) I volunteer, which takes four hours per shift. A lotta shit goes down in four hours. I feel like I should make that clear-- so if another Hall H stabbing or some shit happens and I wasn't there to report or whatever the fuck it's 'cuz my ass was being a cheapskate and being a voluntary cog in the San Diego ComicCon Machine.

I WANT MORE MOVIES AND CELEBS LOOKING AT NERDS WITH THAT DEAD LOOK IN THEIR EYE.
K

Original poster
SEE I KNOW YOU BEIN' A PETULANT PISSBABY RIGHT NOW MUDEKI BUT I CAN VERY LITERALLY WALK OVER AND DO JUST THAT. I CAN ALSO POP OVER TO THE ACTUAL GAMING ROOMS. BUT TOMORROW BECAUSE LOL I DIDN'T READ UR DUM SHIT 'TIL JUST NOW.

But takin' pics of celebrity signings is more difficult because there's a fucking people river surrounding the booth and the minute you even have that glint in your eye like you about to take a photo, the ELITE guards immediately say to keep your shit moving, don't block the aisle, if you're on the gray carpet keep moving. And fuck you Seiji, I'm average height but there's some kinda protein powder in these doritos and growth hormones in these mountain dews because 95% of these dudes are an EASY 5'7".

Imma go one year. It'll cost a lot for Fijoli and myself, but fuck it. Imma go.

Original poster
ComicCon's done. I can't feel my feet. Dropbox is taking its sweet, sweet motherfuckin' time uploading the last pictures but I would think these pictures in particular deserved their own posts, they're some kinda famous people? idk

There was this guy: 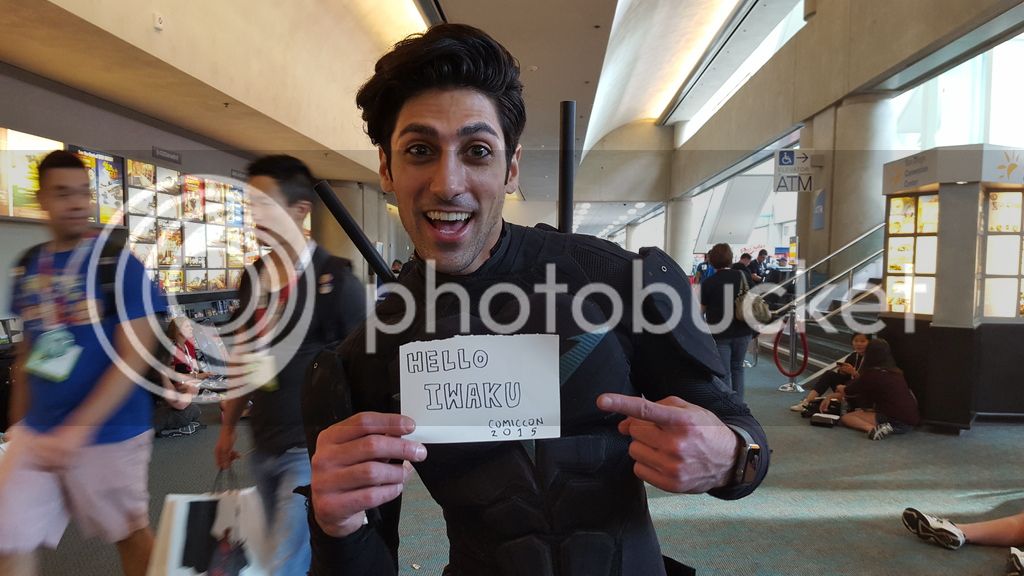 And he does this show:

And then there was this person: 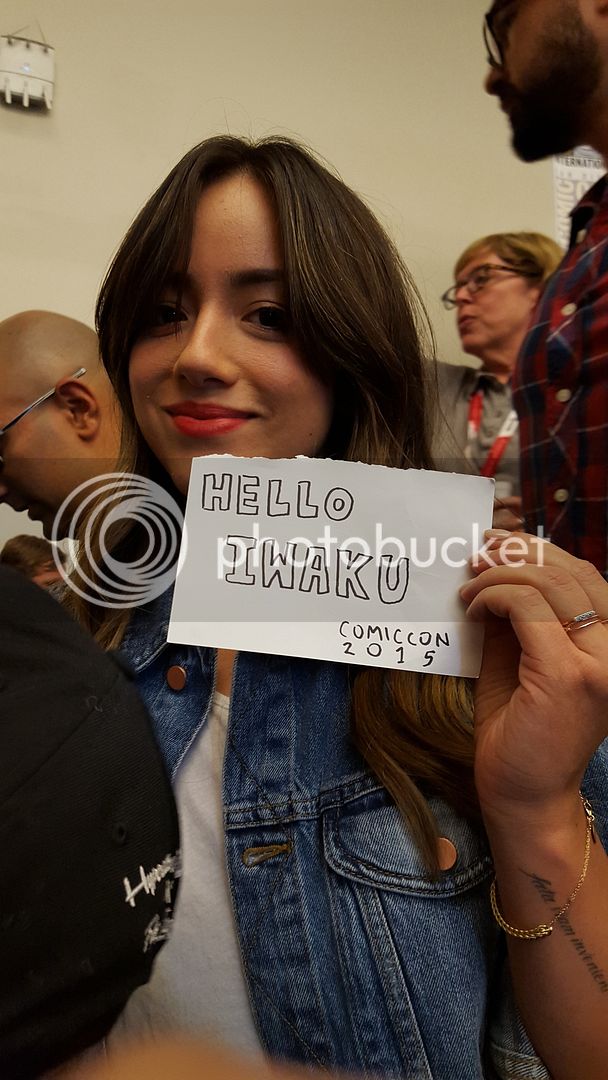 And they're, like, part of the cast of this show: http://abc.go.com/shows/marvels-agents-of-shield
Reactions: Levusti, October Knight, Darog and 3 others

Did you tell them what Iwaku was before they did that? Or were you just like "Here! Hold this!"?

I don't really care what you said, I'm just curious.

Original poster
"There are people who wanted to be here but couldn't so I'm taking pictures to make them feel like they went."

Folk are polite as long as you ain't a tactless, overbearing mouth-breather. You'd think figuring out a nice, quick little explanation beforehand would be easy.

I'm fuckin' kidding, it's not. Emotions run high when you're surrounded by that many idols and personal heroes. That Markiplier dude was there and he was SWAMPED THE FUCK OVER with all these youthful childrens nearly having breakdowns waiting in a line to meet him.

Also, the scoop about Harrison Ford being at ComicCon is that there was a surprise Star Wars concert in Hall H, he and John Williams made an appearance there as a treat for everyone present. They supposedly played clips from the original three SW movies and John Williams conducted a live orchestra to score it.

For those who don't know, Hall H is where all the high-profile panels happen, and it's the place where all those people who camp out for the entire week just to get into something are heading to. To even eavesdrop on anything in Hall H is impossible because of the number of security and ComicCon staff busily making sure things in Hall H are going smooth as possible. It's also where the stabbing took place.
S

Those are actually Pullips! They are made of plastic and are super cute and pricy but aren't exactly BJDs because they aren't strung by elastic. Though dollfie dreams aren't strung either but people consider them BJDs...

ALRIGHT THEY COUNT AND THEY ARE SUPER DUPER ADORABLE. USAGI IN HER PRINCESS DRESS IS THE BEST FUCKING THING EVER.
K

Original poster
I SAW THEM SHITS AND JUST THOUGHT, "THIS THAT SHIT TRIBS LIKES, RIGHT? RIGHT *TAKES PICTURES*" STRAIGHT UP

Deadpool got a trailer at Comic-Con, and it was everything I wanted.
Show hidden low quality content