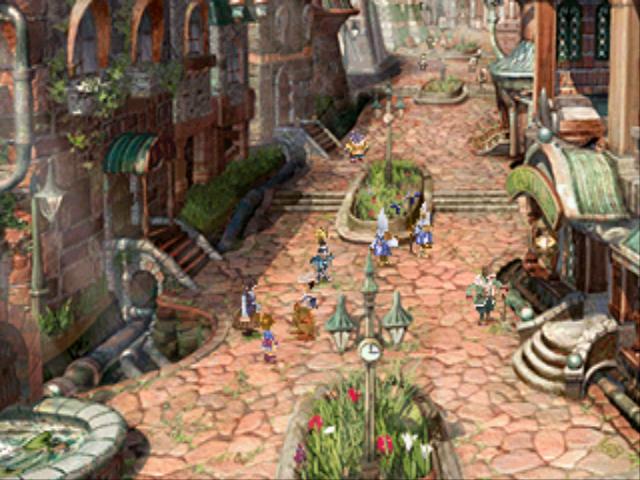 Porg and Grant stepped out of the small tailor's shop, Obskeree fluttering with them. Jack suppressed a grin as he noticed Grant tugging a little at his new clothes. The grizzled doctor was now wearing a full suit, complete with tie and top hat, though he appeared to have taken to the cane that came as part of the outfit.

Obskeree now wore a big (for her) medieval style dress, frills abounded and it was coloured with a red and yellow design complimenting her blue skin. Her hair was done up slightly and now glittered with a golden hairpin.

Porg had tied his hair back into a short ponytail, with the hair too short to be held hanging in bangs around his face. He still wore his waistcoat, but the cape was gone and instead a pair of aviator style goggles hung loosely around his neck. He no longer wore a t-shirt, this garment having been replaced by a full white shirt, cufflinks connecting the cuffs together and a cravat sitting under the waistcoat. His denims were replaced with smart black trousers, though his mismatched sneakers were still present.

"Well that was nice of them to open for us, all things considered" Jack mused to the others as they started making their way down the street. Many of the buildings were standing damaged, even the one they had just exited from had a sizable chunk of it's roof missing.

"I think people just want to be getting on with things" Grant replied as they walked passed a large structure of scaffolding. Various city-folk were hammering and passing materials around. "Seems the attack has brought out somewhat of a community spirit in Iwaku City ey?" He commented, looking as a young boy struggled to carry a lone brick to his father, who gladly accepted it and placed it on a destroyed wall as the boy run happily off to fetch another.

"It's a really positive attitude! I like it" Obskeree added, smiling as she watched the people working together.

"Yeah, I guess at least Diana gave them all this." Porg commented, pausing a little "You see all these people guys?" He continued, taking a slightly more serious tone.

"There the ones we're going to protect, we know Mr Jack" Obskeree said with a giggle.

"Ah right yeah of course." Porg replied, giving an embarrassed grin and rubbing the back of his head.

"So what's the plan? Not the general plan, the proper detailed plan?" Grant asked as they walked towards the looming Iwaku castle, over one of the great bridges that connected it to the city.

"Hmm?" Jack noised as he turned to look at Grant "Oh that..? Well…" He said, looking to the sky briefly "we wing it!" He said happily, grinning to the older man, the burning excitement in his eyes the man had now noticed more than once.

Seriously, I've never been big on suits. They remind me of terrifying interviews and funerals. Back home, I was much more comfy in jeans and T-Shirts.

And now Jack has me decked out like I'm some sorta fucking funeral home director.

At least I can hide a holdout pistol up my sleeve.

“...we wing it?” I turn to look at Jack with a raised eyebrow, “I think we should at least have an idea as to what we're about to do before we go charging in. Preparation's key to this sorta thing. And who's gonna do the talking, exactly?” I grin humourlessly. “Cos just in case you haven't picked up on it yet, I'm not exactly the friendly, outgoing type. I'm usually just the guy who either fixes you or hurts you.”

Around us, the city is desperately attempting to return to it's norm. The people are rebuilding again, covering over the scars of the invasion with fresh brick and stonework. Soon, it'll be as if nothing had ever happened.

Looking into the eyes of everyone we pass, I can tell they're all still reeling from what has just happened to them. With some, you can see the losses they have suffered, even if they aren't openly showing it. Such a terrible event in someone's life always marks them in some way, and I'm good at spotting it.

I'm a doctor, after all, and I've spent my life around people who've lost things dear to them.

So Iwaku City rebuilds again, it's people set on the future promised by Diana.

But I have my doubts as to our great new leader's intentions. Hence why I'm walking through the city in the company of two rather unusual individuals, dressed like a fucking moron.

Because it's high-time we made a goddamn stand.
O

Original poster
Obskeree watched as Porg mused on the words and Grant glanced around the city they walked through. It was a big city, bigger than she had been expecting but then, she was beginning to learn that expectations didn't count for anything in Iwaku. The air was fresh and the breeze made it easy for her to flutter without too much effort. She was perfectly content, especially in her new clothes. The tailor had had a rough time getting her away from the rolls of fabric, and even gave her a few left over scraps for her little puppets.

There was an air of determination about the masses, joined with a pain and exhaustion and - the thing Obskeree picked most up on - hope. She followed Porg now not for his words or beliefs, because she couldn't understand them. What did she know of politics and hardship? What did she care?

No, she remained on his side because she believed he would do the right thing.

"Aw, Mr Doctor," Obskeree assured Grant as she flew between the two men, her gown flowing gently behind her. She caught up to him and rested her arms on his shoulder, answering him without a care, "How about I be friendly enough for the two of us~? Then you can be who you like without worrying!"

It was all very simple, in her mind.

Most things were, and that was how she liked it.

"And you're right that a plan is a good thing," she considered, before Grant could reply. "Even the best improvisers need something to start with, after all!"
L

Original poster
TZSX9000 rolled down the hill, tumble bumple pell mell; it would have been the perfect illustration of the expression 'ass over tea kettle' (had the small drone had either ass or tea kettle- alas, she did not) with a tinny, plaintive schreech until she hit a stone that tripped her over one of the city's retaining walls and dropped her, with a nasty cracking noise, onto the pavement at Obskeree pretty buckled shoes...

"I hate flowers!" She whined. "I hate squirrles! I hate nature! Get it out! Get it out getitout!""

With the dandelion caught stuffed in the hinge of her solar charger panel she couldn't work any of her other hatches except the screwdriver; she couldn't even access her legs stupid design protocols! At best she could kind of half prod herself to roll in a wobbly circle and keep trying to open and close her solar panel, waddling along like a pool ball with paddles- it was humiliating and exhausting and after two days she was starting to panic that her battery would die and she wouldn't be able to charge because her charger was stuffed full of weeds!

She gave up, sitting at Obskeree's feet and started to cry, green iris flickering in distress. "All I ever wanted out of life was a dry pocket!" She hiccuped. "...and maybe an oldies station..."
Show hidden low quality content
You must log in or register to reply here.
Share:
Reddit Pinterest Tumblr WhatsApp Email Share Link
Top Bottom