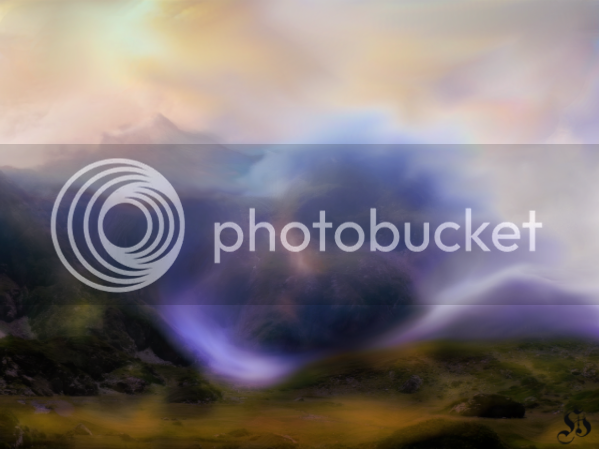 Iwaku is a realm that exists at the heart of the multiverse. It is neither fully physical nor fully dreamlike. No one can really agree on what it is. But one thing is certain - it is a world to which stories are drawn. From millions of timelines and billions of dimensions, Iwaku draws together legends and adventures and folds them into a single Meta-Narrative.

The second is the Cyclical Creation Theory, which claims that Iwaku has always existed in a neverending cosmic cycle of death and rebirth. This theory is upheld by several angelic beings of the Iwakuan Realm, and also by a group of characters called the Legacy Knights, who claim to come from a future where the Cycle ended and restarted.

The third theory is the Paorou-Sama Paradox, which is only believed by madmen. It states that Paorou-Sama, the mad king of the southern wastes, created himself and the land in a time paradox and now the two are one and the same.

THE AGE OF GABRIEL 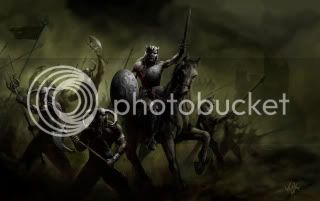 Iwaku was once a lawless wasteland, home to the Noob Barbarians. It was King Gabriel who first stood against them, driving back the savages and consolidating the borders of his new kingdom. With the Noobs gone, Gabriel called out to the distant lands for people of valour and ambition to take sanctuary in his kingdom.

The new kingdom of Iwaku prospered, but dissent was inevitable. The first noble to stand up to the king was Lord Razilin, an ambitious and ruthless tyrant who wanted more territory. Recruiting the bitter Noob hordes and designing his own mechanical soldiers, Lord Razilin started a rebellion against the king from his stronghold at Nerf Castle. He was eventually defeated by the combined force of the King's allies, incuding the ISAF, the Teknikan Empire, and two new angels known as Rory and Asmodeus.

Rory and Asmodeus were made princes of the realm, and Iwaku prospered once more. But in time the King succumbed to madness and paranoia. He deserted Iwaku, and those he left behind fell into rival cults. The Bread Cult, the Shapeshifters, the ISAF, the armies of the Warmaster, the A-Cult, the Z-Cult, the Nekos, the Vikings - almost too many to name.

Iwaku was nearly torn apart by these conflicts, till in time the Asmodeus Roleplaying Corporation grew in power and became more of a threat to the cults than anything before. With the Ego-Zombie virus, derived from Razilin's early Noob control methods, Prince Asmodeus's tyrannical will began to dominate more and more of the population.

At the height of the Corporation's power, the Bread Cult and the Teknikkans conspired against it, framing Prince Asmodeus for the murder of one of Prince Rory's closest friends. The War that followed was catastrophic and almost destroyed Iwaku. Friends and brothers were divided, and many of the old names, including the Knights of Iwaku, were wiped out in the fighting. Asmodeus's corporation was brought to its knees by Rory, who had as his ally the summoned Goddess of Iwaku.

In desperation, Asmodeus turned to the very man who framed him - Paorou-Sama, the Prince of Insanity. Paorou-Sama unleashed a horrific genocide on the Iwaku public and then raised the legendary Sword of Iwaku, using it to almost destroy the world. In the process, he slew the Old God, Homac, and began to rupture the very realm that Iwaku inhabited. But at the last moment, Rory and the Goddess created a Mirror Realm and saved the fragments of Iwaku within it. Paorou-Sama was outwitted and left to die with the angel Asmodeus as the walls of reality came crashing down.

The Mirror Realm created by Rory and Engel needed a place to exist, and so they approached another being, a powerful woman called Diana. Happy to help her new friends, Diana gave Iwaku a place within her own realm. And so, for the next 18 years, the new Iwaku slowly recovered under the kingship of Lord Rory. It was also helped by a rebirth of the Iwaku Knights, now known as the Legacy Knights, who did their best to help people and fund the restoration of the cities. Many who served in the Iwaku War found themselves reborn in the Mirror Realm, the memories of the horror far behind them, and all sought to find new lives in this world.

But there were still flaws in this new paradise. Somehow, perhaps due to Paorou-Sama's final actions, a fragment of the old Iwaku remained lodge in the new one. To the south, beyond a great Mirror of dimensional energy, the lands of Insanity remained. Any who went there would be lost to madness and ruin. Some whispered that the Mad King still lived, while others proclaimed it was a just a trapped memory - a land that couldn't forget.

After 18 years, calamity struck. It seemed that in moving Iwaku from its old realm, some of the magical seals put in place by King Gabriel had been broken. Noobs started to raid the lands again, as well as the Elders - ancient servants of the Search Engine realms who the Noobs worshipped as gods. The major cities were hit, many of them wiped from the face of the earth, and Rory was forced to surrender.

The invasion was swift and ruthless. But a small resistance remained. The Legacy Knights and their leader, the reborn angel Asmodeus, gathered those still willing to fight and set about trying to discover the origin and weaknesses of the Elders. But the resistance did not last long. Using the legends of the Cycle and the True Hero, the Elders used false prophecies to trick the angel into madness and religious zeal. Asmodeus turned against his friends and tore the resistance apart from the inside as he desperately tried to forge one of them into the True Hero who would defeat the Elders.

Eventually, the resistance was forced to kill Asmodeus. A bomb was unleashed that drained his celestial power and used it against the Elders, but in doing so the Mirror that separated Insanity from Iwaku was cataclysmically shattered.

The explosion of the Confluence Bomb, together with the destruction of the Temple of History and the multiple portals caused by the invasion, has now riddled Iwaku with dimensional bleeds. People are starting to forget history, even as their own powers and personalities change...

Through these Bleeds, more people are arriving in Iwaku, as well as Diana herself, who has descended in the AFTA Space Station and now seeks to rule Iwaku in Rory's absence.

Is Diana the True Hero come to save us? Or did she mastermind the entire Invasion?