​
Sunny Southern California. Home to rock stars, legendary surf and a wide variety of expressive individuals. Diversity is around every corner as well as people trying to either make it big or just make a statement. Either way, It's a prime spot for an up and coming Tattoo & Piercing shop.

This is exactly what Chad Cline thought when he purchased the small studio located just two blocks from the Hollywood strip. It wasn't much at first, but since he bought it he has fixed it up with hopes that it will become a trendy hot spot. It is equipped with Tattoo chairs, piercing stations and a small Vip lounge for ' high society' customers. He has a dream for it to become the best, and most notable, place to get inked or pierced in So-Cal, and as he waited for his new employees on Monday morning he finally saw his dream becoming a reality.

This RP will be about Working in a Tattoo & Piercing shop called "Inky Cells". I would play the Owner and operator. Other roles needed would be.

These are the roles I would like filled, but if more than 9 players join we can have more or whatever role as needed.

I have a good idea of what I want the shop to look like and a lot of other things, but I'll wait to post the Character sheet skeletons till people show interest. SO SHOW INTEREST!


Sign up, choose a role and we'll get started!
A

I've got experience with security, and not just Navy.

I know just who to retool for this purpose.

Piercer! I call one of the piercers. I have a basic char idea in my head for it!
K

Awesomeness! Thanks for joining guys.
T

Awesome Raven, Thanks for joining.

So we have 2 Tattooists, a piercer and The security. Hopefully I'll get a couple more players, but if not we can start with this. I'm gonna wait a few more days then I'll post the CS skeletons.

Tattoos: Has a banner than wraps around the back of his neck that reads "Honer and pride" and under that in small italics is "Mercilessly obtain Victory". On his right arm is a Dragon that wraps up around his shoulder and curls down his back. On his left arm he is working on a full sleeve. So far he has some blue flames that turn into skulls, it ends about two thirds of the way down his arm.

Piercings: Chad has never got any piercings as his skin rejects most metal.


PERSONA: Extremely friendly, easy going, laid back, non-confrontational, level headed...At the same time is a no nonsense kind of guy, dedicated, and hardworking. The success of his Tattoo shop is his number one priority, he didn't go into private business to make friends.

BIO: Grew up in Northern California about 40 minutes from the coast. Decided to move to the southern end of the state when he realized he did not like the cold. During his life he has been married - TWICE - and divorced - TWICE -, since his last break up he has been mostly focusing on himself. After some serious financial loss the year before, he decided to take his remaining cash and invest in something he loved. Tattoo and piercing. Although he is not trained in either of these things, he has had over 12 hours of straight "needle time " as well as several piercings as well as a good understanding of the community.

Name:
Age:
Job:
Tattoos or Piercings?: (optional)
Appearance: (Picture, or written description or both. Your choice)
Persona:
Bio: (Short or long, write however much you think you need to describe your character)

Piercings: Two lip rings, one on her upper lip, on the left side, and one on the bottom lip, in the middle

Tattoos: A tattoo of a blue rose is on the center of her lower back, thorny vines travel up her back, and curls around her arms, ending in blue rose florets on the underside of her wrist and curling around her legs until ending at her ankles, in small curling roots. The vines and roots are black with black toothed leaves coming out of the vines here and there.

Persona: Her personality is constantly changing, this is probably due to the fact that she has no real sense of who she is or what she wants in the world. She can be the sweetest person one day, and then the next, turn into an utter bitch, and none of it is related to her menstrual cycle, which seems to scare men. All and all, nothing changes the quality of her job. though it can be extremely hard to put up with her at times.

Bio: Lezzy's an interesting character, earning her name when a couple of her friends modified her name to go with the name of a song in Beavis and Butthead Do America. Other than her name, her group of friends is always changing; she has been seen with goths, preps, jocks, geeks, and many other stereotypical groups. For now, it seems she has gone back to gothic.

As to who she is and used to be, she used to live in Maine, but traveled to Washington state to go to college, but got offtrack, and ran from that, to California. And since then, has not talked to her family. She got involved with the wrong people more than a couple times, so she's understandably a little more inclined to be involved in the brighter part of life. She had given herself her piercings, and gave others piercing jobs long before she took up the job. But she's good at what she does, and takes pride in it. Her personality HAS grated with other tattoo and piercing parlors that she's worked at, and she's been fired from three others. This is her last attempt. If she can't cut it this time, she's unsure of where she's going to turn.
K 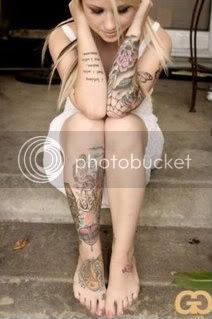 Persona: Mild and naive, she chose to be a tattoo artist because she loved the potential beauty of it and the art she could create permanently. She is a little nervous around the piercers, who she views as intimidating and she's easily startled. Once she starts tattooing, however, it's as though a trance overcomes her and she becomes entirely focused on her work with almost no chance of anything else getting so much as an ounce of attention.

Bio: Danae's mother raised her since birth alone, with no family or father figure around. To provide for her precious daughter, who was so often ill, she worked long hours and as a result, she rarely saw Danae. An obedient child, Danae worked hard to make her own hardworking mother proud but seldom had any friends since she wasn't permitted to have anyone over or be at anyone's house when her mother wasn't home and she was, at any rate, shy. When Danae entered high school, she fit in easily and quietly with the outcasts of the school. It was one of these students who encouraged her to get her first tattoo at eighteen and she fell in love with the idea.

Awesome! I wanna see everyone else's char sheet too! I like Kitti's! And Octy's sounds badass!

Characters look good, Y'all. As soon as Arse and Raven get their sheets up we can start.
T

Persona: Cassie is a sweet person happy and positive she hates being serious but she can be especially about her work. She can be a bit moody and she has a rather short fuse so she has been know to lose her temper but it doesn't happen too often. She is quite intelligent and bold, she's not one of those girls that fade into the background and shes hard to forget some find her intimidating as she always speaks her mind. She never really had a childhood so deep down inside shes a mischievous little girl which results in her being immature.

Bio: Cassie always loved art, she was good at it so it was a way to express herself and it also served as a distraction from her crappy home life. Her father was a drunk and would yell and scream at her mother every night but when he died Cassie's mother couldn't cope and took off leaving Cassie age five in the hands of an orphanage. She was shipped to family after family never probably fitting in, when she was eleven she decided she'd had enough and ran away to live on the street. She was forced to grow up quickly having to fend for herself, so she never really had a childhood which is why she is so immature today. When she was eighteen she got her first tattoo and realized how she could make a living permanently imprinting her art on others.
A

Name: Joel Anson Pierce
Age: 29
Job: Security
Tattoos or Piercings: On his left bicep is a tat depicting an eyepatch wearing skull backed by a pair of anchors. As for piercings... He has one someplace that he got while shitfaced in a liberty port. Not many get to see it...
Appearance:

Persona: A jerkass with a heart of gold.
Bio: An ex-Navy sailor, Joel served his time with honor and distinction as a Master at Arms then wound up pretty much staying in the state he'd been discharged in. He became a vagrant, backpacking his way to SoCal where he finally settled.

Alright, looks good everyone.
IC will be up tomorrow morning.
A

Sorry about the wait Y'all, got a little tied up yesterday **Curses RL for getting in the way of his RP**