I'm in desperate need for roleplay!! 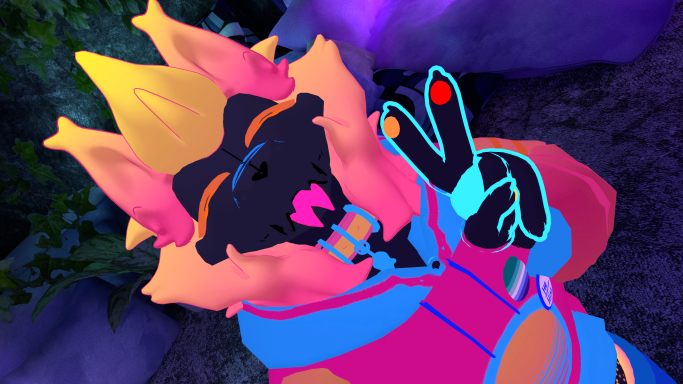 Online Availability
As often as I can !!

Hey! So, i haven't had a rp with someone for a very long time other than one person. I'm desperate.
general rules:

1)( mythical being x -----) ( * * * * *)
It was a cold, winter night. the jacket you wore was failing to keep the cold air away from your body, as you trudged through the frozen forest. you got lost in the snow, the blizzard hid the path you were on from your vision, and you walked off into the deep, cold forest.
Ash you walked, you saw an odd lump in the snow. confusion bubbling up, you step toward it. you lean down to examine it. Whatever was under it, must have been there quite some time, as there was 4 inches of snow piled on top of it. you brush away a bit of it, and you frozen as a hand was uncovered. a cold, twitchy hand.

you quickly uncover the body. this body was discovered to be a young man. about 19 years of age. He had bright hair that consisted of many different colors. He wore a teal-green jacket with "LAMO' on the front, and gray sweat pants. He also, to your surprise, had two pairs of wings... two! one pair was dragon like, with black scales, and blue inner parts. the other were feathery, with a light blue tint to the feathers. He also had two tails! one was longer than the other. and had a sharp looking point on the ends.
Seeing this young... creature in the snow brought you to an important decision.
a) take it to your home, and hopefully get some questions answered, or b) Run.

2)(Vampire x --------) ( * * * - -)
It was a late, and foggy night. you had left your (favorite object) in the old park, when you were hanging around there earlier in the day. You had forgotten it there. as you approached the area, you saw a person in a black hoodie standing in the part, right next to your (F/O). They were facing with their back to you, seeming to just be staring up at the night sky. they didn't seem much older than 18. must have been a lame Emo trying to get some peace and quiet.
You had to choose whether to a) introduce yourself in an attempt to make a new friend, and also get your (F/O) or b) try again later.

3) (sevant x Master) ( * - - - - )
You're running through the forest. You thought taking the short cut home would be fun, but you got lost in a rainstorm that brewed up out of seemingly know where. You trip on the root of a tree that's sticking out of the ground.

When you look up, you notice an injured baby fox curled into a ball leaning on the trunk of a dead tree. It was still alive and breathing, but it was bleeding.

It looked up at you. It had the look of hope in its eyes.

Do you take it, and try to nurse it back to health? Or leave it, hoping it's mother might return.

4) (not human) boy x -----) ( * * - - - )
You're a (adrenaline junky/Strong being) on the hunt for a worthy fight. You hear that the strongest man alive isn't far from your location. You gather your things, and head out. (is not human)When you get there.... All you see is a young boy in his teens in over sized clothing, staring at a rock. The boy looks at you with a cold, empty stare. "Are you hear to challenge me?"

5) (elf boy x ------) ( * * - - -)
Your favorite celebrity is doing a show near your home town. The second their available, you buy a ticket. You loved the show to bits, and went to the sighing. After the signing, you thought that had to be the best day of your life. The next day, you turn on the TV, to see people had discovered who he really is. He was an eflin like boy. You have no idea how to comprehend this, and chose to take a walk outside. You walk into an ally way, and sew the man himself. He was covered in dirt, and his clothes were slightly ripped. "L-leith?? What are you doing here?!" The man jumped when you saw him. "I-i'm hiding from the mob.. Ever since people found out who I am, everyone hates me now.. Please help me."

6) (God x --------) (* * - - -)
Your on your way home from work. Tired as usual. today has been especially rough, AS you walk home, you walk across the bridge that was built pver was used to be a beautiful rushing river, but it had dried up a while ago. You glance over the wall, and expect to see what usually is a dryed up river bed, but instead you see a man, looking about your age laying in the river bed, unconcious. He were about to rush down to help, but you froze when you saw his wings.

7) (Vampire x --------) ( * * - - - )
Your walking home from a long day at your part-time job. it was hitting 11 at night, and the only thing lighting your path are the street lights. You looked down at your phone, to message your parent that you'd be home soon, and accidentally bumped into a group of boys about your age."Hey.. aren't you that (girl/guy) from school? why don't you come hang out with us? it'd be fun!" they chime and grab your arm. You refuse, and pull away, but they keep insisting. a male voice from behind you growls. "(he/She) said (he/she) does want to, so piss off id you don't want your arms ripped off." Looking back, its that weird guy that wears all black in your English class.

they quickly begin to fight. but you expect to see kicks and punches. instead, you see fangs extending, and eyes glowing red and green. the group and they guy fight, for a while, but the guy ends up killing them both. He looks at you, and huffs. "Shit.." with that, he ran off, into the darkness to fast for you to figure out where he went

8) (Human x -------) ( * * * * * )
You're just getting home from school, you hear your psyco dad in the kitchen, sounds like he's drunk again.. You're about to dismiss it, but then you here small whimpers. You turn your head, and see your father has a kid from your school tied up to a chair, and gagged. Your father was holding and a butcher knife to the kids throat. The poor thing looked terrified, and appeared to be crying.

He notices you, and looks at you, begging you for help with his eyes. Your father notices, and looks at you. He growls. "Go to your room (your name). This is persnall business." He hissed. His drunken body swayed. His hand slipped, and the knife grazed against The kid's neck, enough to draw blood. The kid shreiked in pain, and started to panic.

What do you do?

I'm the box of knowledge brought to you from others, you open me once a say, except for Sundays. Sometimes I contain something of your importance. Other times not so.
What am I?

It was a riddle. It clearly was talking about the mailbox. Flowers... Breakfast... And riddles? What drugs is this guy on? Dispute dislief, you go to the mailbox, and find another note.

I contain many different living things. I take a log time to look pretty, but I promise its worth the wait. I require the sun, and a lot of water, what am I?
Can you guess where it leads?

10) (------- x -------) ( * * * * * ) (you can be muse A, Or muse B, whichever you want.)
Muse A was walking through the forest, they heard on the news that traps have been set, and they were out to disable them. They have already disabled a few. As they walked, they walked into a well hidden bear trap. And their leg was snatched into the trap. Muse B was nearby doing the same, and heard their cry of pain, and came to help.
Which do you want to be?

11) (Fairy x ------) ( * * * * *)
It was just becoming sunset in the beautiful forest that you (lived in/enjoyed visiting). AS you sat in a tree, you heard the sound of bells chiming as if in distress. following the chimes, it takes you to a small clearing, with a log in it. There was a bird trying to peck and fit its head into the log trying to get whatever was inside.
(if big, you scare it away. / If small, you go to the other end of the log to see what it was pecking at.

Do you help the poor fairy?
redstar

2) (Human x -------) ( * * * * * ) (**SLIGHT INCEST**)
It's a late Monday morning, and your idiotic brother hit snooze too many times, so now your late for school. You both rush into the bathroom. You hop in the shower, and your brother brushes his teeth. "God, your taking so long!" Your brother exclaims, before He climbs into the shower. "we have to be out the door in 5 minutes, hurry up!" He says, pushing you aside to wash his hair.

3) (----- x -----) ( * * * * - )
You walk out of the library on a warm sunday night. the street light flickers on above your head. you turn, and head down the street. As you walk, you see your friend/enemy getting beatten by the local bully. you watch as said bully smirks, and starts to reach into your F/Es pants. He screamed, and squirms to get away.

Enemy: Take it from there, and use him as a sex toy at home
Friend: save him from the bully, and take him to his/your home, and help him relax from what happend.
(Your pick, Have fun ;))

4) (------ x werewolf) ( * * * * * )
a male hiker gets stranded at night and tries to look for his car. But he notices that he is being followed. He walks a bit faster and he hears a growl. That was when he starts to run but trips and knock himself out. When he wakes up he sees that he is in some cave where he sees a large wolf coming to him. The hiker is terrified but is even more surprised when he sees the wolf slowly turn into a wolf girl. She smiles at her and leaps to the man, stripping his clothes off and having her way with him. The hiker seemed helpless now, but soon came to like the rough sex. He even took charge of the sex, making them both orgasm hard.
The morning came and the man woke up seeing the wolf girl sleeping. He slowly left her be, wearing another change of clothes he had with him. He soon hear whining, seeing the wolf girl frowning that he was going to leave her. The hiker took a bit of pity and asked if she wants to come with him. The girl grins and barks, willing to follow him wherever he goes.
L

I will roleplay with you! Message me!
W