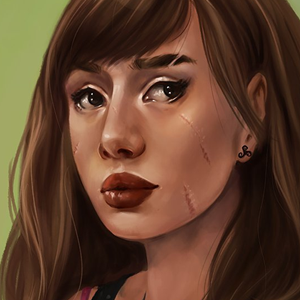 Wants & needs:
- Decent English. It's not my native language, so I'm definitely going to bitch on a mistake or two, it happens, but it has to be well-readable. The characters are the ones cracking codes, not us.
- Effort in a post. I hate 'enforcing' a bare minimum, but I do prefer it when me and an RP partner write posts with similar levels of content. For me posts tend to range between 300 and 500 words. No particular reason why, that just appears to be my sweet spot. So someone who can match something like that without a need for filler that doesn't add anything would be great.
- As for things like blood, gore and the like; I'm fine with an antagonist being pretty dark, but I do want there to be proper build-up. My characters at least are 100% fair game to be dragged through hell and back, as long as the progression of events makes sense, basically. Let's make it juicy, but solid.
- A pro-active partner. I don't want to be the only one dragging the thread along.

Fonzo could do nothing but powerlessly watch the men go through his books with feverish determination, sure that the book they were looking for would be that easy to find.
Suddenly a gun was pulled, but at the same time, Dominic emerged from the back, switchblade in hand.
“Son, don’t” Fonzo barked. Dominic shot a quick look at his boss and then at the man holding the gun, who tilted his head.
“You heard the old man, back off. That butter knife ain’t gonna do shit.”
He pointed the gun at Dominic and took the safety off.
“Be a good boy and fetch that book for me, will you?"
Dominic felt his cheeks warmen.
“Go to hell,” he spat.
“Nick, give them the goddamn book, this ain’t worth your fucking life,” Fonzo snapped. “Grab the book, or I’ll do it."
Dominic hesitated. Something in Fonzo’s tone took him off balance.
“Just- just go, get the book,” Fonzo softly said.
Plots:
1 Viral treasure hunt

Character A and B share a youtube channel that does reasonably well, but not quite as well as they'd like, and one dat get their hands on what appears to be a code or 'treasure map' of some variety with everything on it well-coded. It comes into their possession by accident as they find it in a library book one of the characters took home from the university library.
They share its progress on their channel and make it a habit to try out the most upvoted suggestions, which makes them go viral. The hype surrounding their series gets bigger and bigger and, quite frankly, soon enough it becomes bigger than what they could possibly deliver, but they just ride that high without really considering the consequences.
Then someone who claims to know exactly what to do gets upvoted like crazy and, once he/she has proven to indeed know more, starts making increasingly risky demands that the duo feels compelled to comply with, now that they are neckdeep into this and not quite willing to let their newfound fame die down.
2 Summoned
A

Character A is part of a coven of some kind that summons a demon. They messed up, however, and when the demon, character B, is summoned, it turns out they are not bound and free to do as they please, which is exactly what they intend on doing. A in this scenario would either be someone out to stop B before it's too late, or someone who is pleased with the course of events (maybe even sabotaged the ritual) and planning on coming along, wether B likes this or not.
B

Character A has summoned character B, a demon, who they command in exchange for their soul in ten years. However, A messed up the wording in their agreement a little so while at first B has to do their bidding and hates every second of being told what to do, they are slowly figuring out a way to get out of their part of the agreement and make A regret all this very much.
3 Shipwrecked

The characters find themselves shipwrecked on what appears to be a desert island after having gotten into a heavy storm. The island, however, is home to something of a cult. A bunch of folks messing with dark things who really do not appreciate uninvited guests. They do see some use in the main characters, however, none of this is going to be pleasant so while trying to get themselves a ride home, the characters also need to either keep hiding from these people or find a way to fight back.
Soon enough it turns out that the dark things the cult people mess with aren't just some religious stuff or other superstition, but actual dark entities that are either very powerful in the wrong hands, or downright catastrophical when not kept under control. So there's that, too.

Can be done without the fantasy element.
Reactions: ⊱ firésian