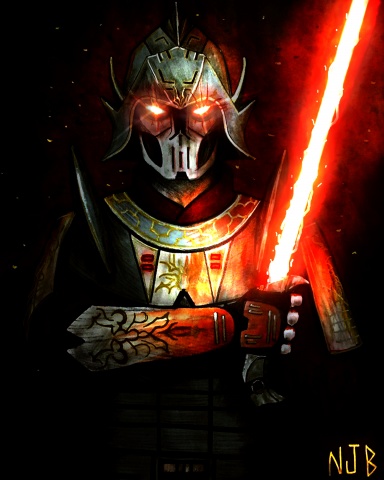 Hook:
You are a citizen of the Imperium of man. A humble servant of the God Emperor as you live out your days as one of countless cogs in the living breathing machine of the empire. You may wish for the day when your endless cycle of laborious duties come to an end. Maybe you are seen fit to join the imperial guard when they come recruiting. Perhaps you possess some innate gift that with hope would garner your rise within the hive city you call home...or...you may make your own path through less tradition means.

Main:
Everyone will be humans on a hive world known as Sephus within the Segmentum Obscurus. It is a planet far north of Terra at the edge of the Imperium's influence and close to the Eye of Terror; the main manifestation of chaos within the material plane. Sephus is like most other hive worlds. It is self sufficient, has a massive population which is contained within various hive cities scattered among the worlds toxic wasteland like landscape. Sephus 1 will be the city the PCs will call home. It has snarky nobles at the top, overworked citizens in the middle and the worst scum feeble mortal minds could imagine down in the underhive. I plan for the monotony of the average imperial citizen's life to be broken of course since otherwise this would be a very dull story. But I'm not going to spoil how just yet. Perhaps the planet comes under invasion by ransacking orcs. Maybe an internal conflict sparks up within the city itself eventually throwing the entire world into a revolt. Perhaps without warning the sky will turn purple and open up as the latest black crusade starts at your world or maybe...the taint of chaos and corruption is far closer than you think. There is a good chance that if you liked any part of what you just read then I may have your attention now.

In summary the main ascetic of warhammer 40k will be at play here. Dark, horror, violent and just everything being hellish. But through the determination of the characters along with a little luck and faith they may not only live but rise from what they were deemed to be. I want to keep paths open for those involved. By which I mean you could end up inquisitors, imperial guardsmen or the newest members of a chaos worshiping cult and so much more depending on your choices. Think of this "Humble Beginnings" as the first chapter in the new lives that these characters will be rocketed into. This will allow me to steer the story rather than simply move things from a to b to c. I will still lay things out of course especially in the beginning but choices will matter...and stupid decisions will get you killed. I know this sounds ambitions to be so open ended but if it wasn't I feel it wouldn't be worth writing and RPing. I've participated in warhammer 40k and Dungeons and Dragons and plan to run it in a similiar fashion (Minus the large amounts of dice rolling of course) to allow the open ended and choice making ascetic. I might impliment luck dice rolls for certain things but I plan to keep dice rolling low unless those participating like and want more of it.

"You decide your own destiny through the choices you make."

I think 4 to 5 people (not including myself) will be a good size for what I have in mind here. That's not too many people but also not too few. But of course this is just the interest thread and not the sign ups.

@AceSorcerer @Dipper @Tsukimora
Tags for those I know for sure have an interest in the setting. ;)
Last edited: Feb 5, 2020
Reactions: Dipper, AceSorcerer, Ariel and 1 other person

"We are judged in death for the evil we destroy."