How do you build?

[BCOLOR=#003300]One thing that sometimes intimidates people (me included) when it comes to worldbuilding is the fear of being overwhelmed by the creation of an entire world. I find that what helps me is to come up with an idea for a creature/character and to create the world around them. But then I know others who begin with the world itself and fill in the spaces as they go along.[/BCOLOR]

[BCOLOR=#003300]So how do you worldbuild? Do you build from the ground up, or from the sky down? Do you have a checklist or do you start with a general map? Share your techniques and your method of attack here![/BCOLOR]
Reactions: 1 person

I wrote a whole long guide (shameless plug!) on my process, but I can give a very short version here.

I mainly work from the top down, going from the most general things (like goals of the world and what genre it'll fit in) on to more specific things (like how magic works) until I get down to the point of making actual single living entities in the world. However, it's never a truly one way road. Sometimes I'll start out with ideas of specific things I want in the world, so I'll build the world specifically to allow them. Other times I'll come up with ideas as I'm building, and those specific things might get fleshed out before I've got anything like a functioning world. The main direction is from the wide top tier things down to the narrow view, but random inspirations do not walk in lockstep with that plan.

I absolutely use a checklist (of a sort). There are certain elements that I feel are required for a world to be functional, and I make sure I get each one completed before I say I have a finished product. It's easy to miss things if you're not organized, and having to retroactively include some previously missing element usually makes things awkward, so I like to avoid that. Sometimes it's a literal checklist on paper, other times I'll preemptively make text documents with titles matching each of the potential checklist options. Whatever the exact method ends up being, checklist use is definitely in effect.
Reactions: 1 person 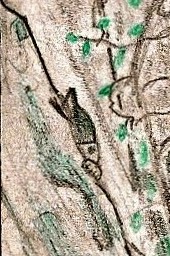 To keep myself from ever becoming inundated when creating worlds, I tend to build a ton at once. This allows me to switch between focused construction and casual inspiration whenever I want, and often allows me to accidentally come up with an idea that works perfectly for a world while working on another.

Of course, this does mean that most of my worlds are stuck in development, but I don't really mind.

When considering a world as an individual, however, my focus varies. In a sense, how I go about building the world is as important in defining the world as the pieces I put in it.

For larger projects, worlds that I hope to someday use for a series of novels, I use a top-down method. I figure out the genre, the sub-genres, and maybe some themes, and then I create systems that reflect those themes. For example, in my "low-fantasy" world, one of the prevalent themes of the world's history was that magic was becoming increasingly obscure and mythical in nature. As such, I focused first on building a magic system that would incorporate that, then the various ages as defined by how societies would handle magic. Both as I created the magic system and the ages, specific stories throughout the world's history formed, and I began expanding on the characters and plots for those. In these larger projects, I create a world for the purpose of writing the stories within.

For smaller projects, I work largely in the reverse. I create interesting and particularly varied characters—oftentimes characters I created in games like LittleBigPlanet—mix them all together, and then split them into potential groups. For each group, I create a world that accounts for their particularities. For example, one group included an amazonian-styled warrior of the jungle who fought with large crystals protruding from her gloves, an adventurous explorer/conquistador, and a painter who used paint for combat. To make them all fit together, I created an imperial setting where the jungles were being colonized, and a magic system where all water is replaced with a magical substance—that can also be found in crystallized form. From there, I figure out what sort of tech and societies might develop, and from that, I decide on a genre. While these worlds also allow me to create stories, their purpose is instead simply as an avenue of worldbuilding. Practicing with them help me with the bigger projects.

That being said, those are only two general and simplified methods. Because the method I use to build a world is very closely related to which world I'm building, specific focuses vary wildly—for some, magic systems come first; for others, characters, or plots; for others, races, creatures, and technology. And I'm always jumping between worlds.

I basically start with what needs definitions to start my story! If the story starts with an earthquake in a sleepy old town, then I'm going to give a little more depth to that sleepy town.


I also remember that worldbuilding can be as small as a pebble, as big as a planet; I don't have to build every insect and forest and continent, just the stuff that my story is going to touch; it takes a lot of the pressure off and lets me focus on the stuff I want to (story)tell about!
Show hidden low quality content
You must log in or register to reply here.
Share:
Reddit Pinterest Tumblr WhatsApp Email Share Link
Top Bottom