Main Plot
Welcome to Chul's Estate, where only the most promising idols are brought to study and further their education, all the while starting their career! Chul's Company is without a doubt the world's most renowned and wealthy company dealing with idols, and every idol from Chul's Estate has had a long and successful career! Idols here are educated on everything they need to know in order to be a successful idol and musician, and some even form their own idol groups while living here! Those who have been chosen have been taken from music schools which are sponsored by Chul's Company, and every single one who has left Chul's Estate has become wealthy and renowned.

But now, it's your turn to indulge in what Chul's Estate has to offer! Pave your own path as an idol!

House of Idols is a slice-of-life RP, detailing the lives of several different, new idols as they attempt to learn about the trade and become successful at the same time. A good deal of the RP will have to do with events here and there, but throughout the story, characters' personalities and relationships will be focused on. So, if you're looking for something relaxing and fun, what are you waiting for?

Oooh, I'm definitely interested. Would an image from an anime avatar creator be acceptable? I'll be playing a male by the way.

May i reserve a male?
S

Moogle-Girl
Hello friend! Thank you very much for your interest! I look forward to chatting and RPing with you! Ahh, I'd prefer an actual anime character, if that's fine.

In that case would a written description be okay? .w.' (see my signature)
S

Original poster
This seems fun! I'd like to reserve a female, please?

Reserve me a female?
S

Thank you! And yes, you definitely may!

Original poster
Hello, is it possible to reserve an administrative position? If not, I'd like to reserve a female spot.

Appearance: Red doesn't bother to make himself look especially nice, so his light brown hair is scruffy for its short length and his squat figure sits on the pudgy side. His round jaw, large mouth, and vibrant red eyes display every emotion in crystal clarity and make him look very approachable, if easy to read. Even the way he carries himself invites conversation; his relaxed posture is sure never to scare someone away. He's almost never seen without a large white pair of headphones on his ears, playing some upbeat track on low volume to supply a soundtrack to his life.

Clothing Style: Bold and colorful is Red's favorite style. He dresses most often in warm colors and casual clothes like t-shirts and sweatpants, and he owns several pairs of customized shoes.

Overall Personality: Red is upbeat, passionate, and permanently peppy. If you pass him by, he'll almost always be wearing a smile, one that won't be taken down easily. When something's on his mind, he speaks up. When he starts something, he finishes it. He loves making friends and remembers the name of just about everyone he meets. After all, you never know when people are going to come back in your time of need, and he firmly believes that everyone has a purpose in life. Some people find his constant upbeat attitude a little annoying, but most find his happiness infectious and consider him an all-around fun guy to be with.

Bio: Red's childhood dream was to be a famous club DJ. He did all kinds of research, learned the subtle art of watching the crowd to tailor his mixes, even picked up a part time job helping maintain some equipment at a local place so he could watch a real pro at work in the meantime. After really experiencing the job, though, he decided a spot behind the turntables wasn't quite for him. He wanted something flashier. Something that let him create, not just tweak and mix. He wanted to be a real musician!

Throughout his school years, Red had made plenty of close friends, many of which played an instrument or sang. They let him try out their equipment and gave him the honest, open feedback he was looking for. And finally one of them pointed him to Chul's Estate, where he could really take his skills to the next level. After settling on the synth and getting in some great practice writing his own eurobeat music, Red felt ready to go on with this new dream.

Instruments played: Synthesizer
Voice: Red's voice is a little lower than many people think when they first see him. He's no Morgan Freeman by any stretch, but it's enough to catch people off-guard. He isn't the greatest singer in the world and prefers to express himself through his instrumentals instead.

Original poster
@Sea Salt Is it okay if my "female" is biologically a male, but identifies as a female? 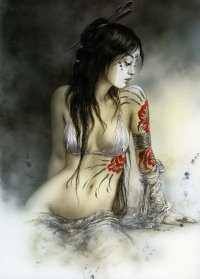 Clothing Style: Artsy and unique, Joon Ki's apparel was chosen by his agency in an attempt to make him stand out from the chic fashion trends that many idols promote. He's often seen with various hand-made accessories (his favorite being his signature purple scarf), and of course, his unique green hair color.

Overall Personality: Although he may not seem outwardly competitive or hot-headed, one thing that get the fire burning for Joon Ki is his passion for his job. A lover of all things that show quality through hard-work and dedication, he is an extremely focus-driven man, and appreciates seeing effort from others. He constantly encourages others to pursue their dreams and to explore new things.

Dislikes: When people say, "You can't do it," or "That's impossible", being stuck in the office/building for too long

Bio: Growing up in a family of failures, Joon Ki was the 3rd of five children born into a lower-middle class family in Incheon, South Korea. His father was an eccentric wannabe photographer, convinced that one day his hobby would be able to save his family from the large amount of debt they've acquired. After his two older brothers dropped out of high school, he was determined to break the cycle of disappointment that had haunted his life for so long. Much to his fathers elation -and his mothers dismay- Joon Ki set out to become a solo idol... and he's determined to defy the odds, if only to save his struggling family.

Instruments: Piano and acoustic guitar (although he is embarrassed to play in front of others)