Gonzo said:
Speaking of... How is your new roommate? Does she do any weird shenanigans?
Click to expand...

THERE'S A GOOD REASON WHY I WANTED A NEW ROOMMATE THIS YEAR. Also I don't want to live in the building she's in.
Click to expand...

That's so boring though... ;A;
Reactions: Saito Hajime and Razilin

DO IT FOR THE LULZ.

Make sure the smiley-winky is emphatically displayed.

Kaga-kun said:
Don't care. I really don't feel like turning my current roommate into an Internet personality.
Click to expand...


This is why you need to move back with Henry.

Ok, so, so... It's been a while since I've given you guys a good Henry story, and, well, you know how I sometimes take screencaps of bizarre Tumblr posts of hers? Yeah, this is one of those, except this post is her telling the story of something that happened between us earlier today.

Basically what happened was that I was at "late night" (which is basically our campus's word for an extra meal that's served in some of the dining halls in the later evening hours -- I don't know if other college campuses have something like that, but, yeah), and I had already finished eating and was about to leave, when I noticed Henry sitting at another table with a mutual friend of ours. I stopped by and said hi, but I didn't want to stay and chat for too long as I had work I planned on getting done. And then I noticed that Henry didn't seem to be talking much and instead seemed to be staring off into the distance blankly with this weird look of concentration on her face, resting her head on her hand. And I was just like, "...Are you ok? You look like some kind of old painting, staring mysteriously into the distance like that." and she, without even looking away from whatever fixed point she was staring at, just replies with, "I'm trying to fart."

Mind you, I wasn't even really too weirded out by that statement or anything -- this is rather low-level stuff for Henry -- I just didn't know how to respond to that and, like I said, I wanted to leave and get more work done, so I did.

This is Henry's version of that story: 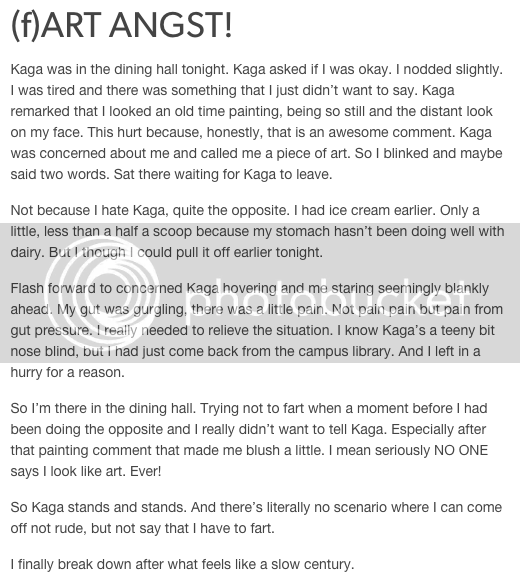 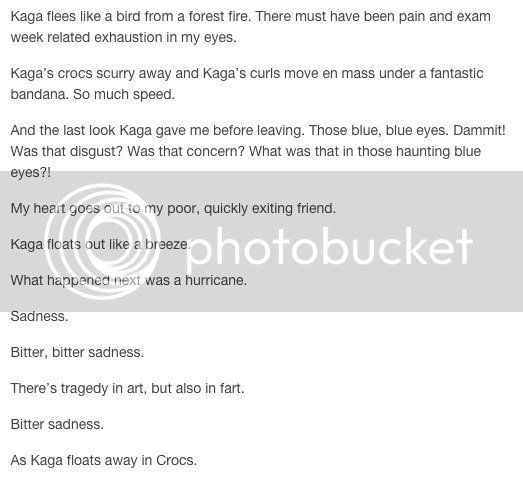 I don't know what to say about this. XD
Reactions: Gwazi Magnum and (deleted member)

Headcanon
Henry: "I'm trying to fart"
Super seme kaga: "I'll be with you all the way" -stares passionately at Henry while holding her hands-

THAT'S WHAT HENRY WOULD HAVE WANTED! :D
A

Original poster
I think we really should really be focusing on Kaga's choice of footwear, here.

Gonzo said:
I think we really should really be focusing on Kaga's choice of footwear, here.
Click to expand...

I am not ashamed of my crocs.
Reactions: Gonzo
A

Kaga-kun said:
I am not ashamed of my crocs.
Click to expand...

Crocs are cool. :D As long as it's not socks and sandals. *shudder*
Y

Arcadia Lumina said:
Crocs are cool. :D As long as it's not socks and sandals. *shudder*
Click to expand...

Nah the only crocs that are cool are crocodiles >:[

Kaga-kun said:
I am not ashamed of my crocs.
Click to expand...

Arcadia Lumina said:
Crocs are cool. :D As long as it's not socks and sandals. *shudder*
Click to expand...

Here's something that happened, like, a week or so back, but I'm only getting around to telling you about it just now:

Henry was apparently very surprised to realize that I even read her "(f)art angst" post, acting like she never even considered the possibility of me reading it. ...Even though she posted it publicly to Tumblr, and she knows that I follow her on Tumblr, but, she just said that she thought I always just scrolled past all her posts. ...Despite the fact that, given the things she's posted in the past... yeah, I can't not read an original post from her. I'm always too curious to see what the hell she's rambling about now.

Anyway, later I saw that she'd posted this:

And there are just... so many things to comment on, here. Her use of the phrase "Tumblr spouse", the fact that -- knowing her -- she used a shrunken, JPEGed, watermarked stock image completely unironically...

And theeeeen it got even better: 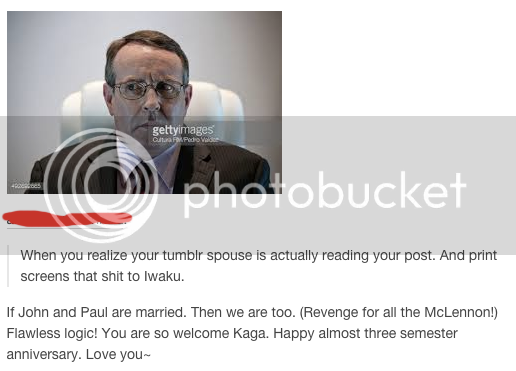 HENRY HAS CONFIRMED THE SHIP BEING CANON!!! Now where is the wedding cake?
Reactions: Gonzo
S

I'm assuming it just means that we're married... on Tumblr?

...It's not like that's a thing that anyone else says. She just made that term up. *shrugs*