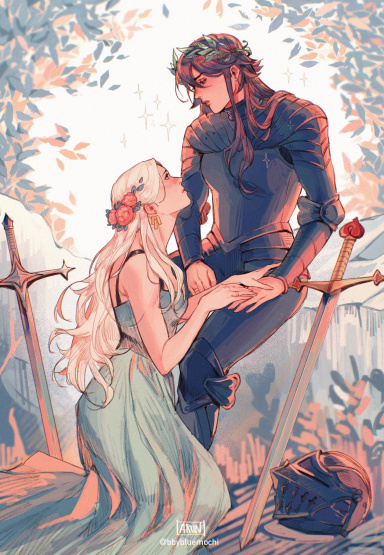 Many of us have felt it.

That feeling as though something...

Is watching over us.

Making sure we are safe...

But they never came for us... That guardian angel we needed so desperately... We never got to finish our goal in life... Some of us might have had our joy ripped away from us. Others may have been barely holding on by a string. And for others... They might have never known happiness at all... I'm not mad. I'm disappointed. Disappointed with how unfairly I was treated. That's why I'm here, I like to think. I'm not some tortured soul left to wander the earth, or some evil spirit seeking revenge... I'm the thing I never had. I'm someone's Guardian Angel... I'm a second chance... A second chance for Happiness...

This is the story of a group of unfortunate teens whose lives were cut short, one way or another. These unfortunate few might have been happy at some point, or perhaps never happy at all, but whatever the reason, no help came when they needed it most. But they remain in this world. Even if we can't see them. They help us in our times of need because they never were helped themselves. They call themselves Guardian Angels.

There won't be too much in the way of plot in this RP. This is about each Guardian Angel and there story. As such the focus is on the characters, and the "Plot" will arise from their backstories and their interaction with the other angels, as well as a few of the characters who will not be dead. I'll be taking no more than eight Angels. As for the live characters, I would much prefer to have the people playing angels already act as a live character if they wish too. The angels will be able to interact with a live person and their surroundings, but they can not be seen or heard.

This is the single most important thing of this RP. As such, I expect characters to be more thoroughly fleshed out. This means you HAVE to have your History written and CAN NOT have it revealed in rp. I will also be making Personality required to be more detailed than a few sentences or bullet points, rather a paragraph or two. So without Further Ado!


Name: (Include any nicknames)

Years Dead: (If applicable: How long ago did they die?)

Appearance: (What do they look like? Anime pictures only. Pictures heavily prefered, but well done descriptions easily acceptable.)

History: (The life/unlife of your character. If angel be sure to include the cause of death and what led up to it occurring, as well as motivation to protect. Required three paragraphs minimum.)


Personality: (How your character acts and, why they act that way. long 6 sentence minimum.)


Relationship Status: (Crushes, etc. it is not required to state one, and if you would like to keep this one secret, you may, but be sure to update once that changes. As for being in a relationship, if it is with another player (Which it should be) make sure the other player is in agreement. )


That's about it. The character creation process might take a while, so I will be allowing people to reserve spots. And you may turn in an unfinished CS so long as your history is fully completed and you have at least a small tidbit on personality. But be sure to finish later. I will be enforcing that. I am a little busy today, so my character will not be up until later today, most likely.
​

Luck is a fickle thing. Whether you have good luck, or bad luck, there is no way of changing it. And this particular child seemed cursed with bad luck. but as he fell, he did not curse the Heavens, the stars, his parents... No... He prayed. For safety. Not for his own... And now, he closed his eyes thinking back on his life...

His parents were constantly traveling, and never home. But he never went with him. He always stayed with his Grandma. She practically raised him, actually. She couldn't blame her daughter and her husband. After all he was an experienced pilot and had seen the world, and her daughter followed her dream and became a famous actor, being in several movies across the globe. But poor little Kiri was left alone. He wasn't sad though. It had always been this way. Grandma was fun and kind. She never yelled(though she certainly knew how to make him feel bad for something he had done wrong.), and she taught him about so many things. But soon time caught up to his aged caretaker. She died peacefully in her sleep. This was the first time Kiri had experienced death. In light of this event, his mother came back. She promised to be there for him more often now. He was 7 at the time. Several years later and his family was beginning to look like a family. His mother had been on hiatus for quite a while, as his father came back now and again to check up on them. He was happy, and glad that he could live with his parents. When he turned 13 his mother was offered the lead role in a movie. It was an opportunity she had to take.

"Now Kiri, you understand right? I want you to be a good boy while I'm gone."

His father was back and actually flying the plane that his mother was going to board. He was going to be sent to an old friend of his mother's while she was away. He didn't know them and it was weird. She was a nice lady, as was her husband. And their daughter was... a lively one to say the least. Kiri had always been a quieter child, but she was much different.

It was so sudden. Kiri had no time to react. He didn't say anything. And just shied away. It wasn't much different than that for the rest of his time there. But something was amiss... He never got a call from his mother. He became nervous, but pushed the thought from his head.

One night, he was thirsty, so he snuck out of his room for a glass of water. There he heard his caretakers taking.

"No one could have seen it coming. But right now, we need to figure out how to tell Kiri what happened to his parents..."

He didn't want to listen any more. He knew what they were talking about. He knew his mother hadn't answered any times he tried to contact her. He has experienced death before... He scurried back to his room and shut the door. And it stayed shut for a long time. He didn't leave his room. At all. For several months he stayed locked in his room. He never came down to eat, and Reika always brought him food. He never came to the door until she left, and often didn't eat for several days at a time. Then finally, Reika couldn't stand it any longer.

She pounded on his door. No matter how many times his parents said to leave him alone, she didn't listen. Until this time, she tried the door. It wasn't locked.

"Kiri, everyone is worried about you!"

She was furious. Without warning she picked Kiri up from his bed, and punched him. He would have done something, but he felt something warm drip onto his face... She was... Crying...

She pulled him into a hug, crying into his chest. She couldn't help it. Kiri soon released his own pent up feelings. He held her tightly. And they stayed that way for the rest of the night. When he awoke the next morning, he saw her face right next to his. He felt his heart tighten and his cheeks get hot.

It had been two years from that day. Kiri is out of his room again, and enjoying himself again. He is still the reserved person he was originally, but now he is happy again. He spends his time with Reika, who has become his best friend since then. And he was happy. Perhaps his luck had turned...

He stood outside of the room. It was quite the commotion inside, people scrambling around frantically, muffled orders being given, the faint constant beep that escaped the door before him... And the woman crying, with her husband trying to act strong... The grasp he had on the balloons loosened, as they rose to the ceiling. Who was he kidding. His luck would never change...

He had no control over his body.

His ears pounded with the beating of his heart

He was headed towards the elevator. He wanted to stop, but he couldn't. The hall seemed endless, as though he'd never reach the cold metal doors. But he did. His hand raised to the call button...

He entered, and hit the top most button...

This was happening... There was nothing he could do to stop it...

The ride seemed to take forever. No one called the elevator, no one spotted him. It was meant to be.

On the roof now, it was only a short walk to the fencing that separated him from whatever lied before him.

Over he went. Now holding on to the chainlink fencing, the only thing that was keeping him from losing his balance. He was ready to let go, when he felt a buzz in his pocket. There was no need to. But...

He couldn't believe it... He was overjoyed. He shuttered at the thought of what would have happened if he had jumped. Climbing up the fence, the stars struck once more.

A strong gust of wind blow from across him. As hard as he tried to hold on... He couldn't. As he fell he thought to himself...

Luck is a fickle thing. Whether you have good luck, or bad luck, there is no way of changing it...

Since his death, Kiri has changed significantly. He still speaks softly, but he's more social now, often talking to other Guardian Angels. After he became Reika's Guardian Angel, he became braver, and stronger, as well as more possessive. He would do anything to keep her happy. After all, she is the reason why he lingers in this world. However he can often appear detached from others while he is watching over her. It doesn't take much to see how much Reika means to him. Whenever a new Guardian Angel appears, he is usually the first to introduce himself and show them around. After all, this is a second chance. Not for them. But for someone.


Relationship Status:
N/A​
​
Thought I abandoned this did ya?

In any case I'll be making a character sheet for Reika if more interest is generated. So yay. Feel free to ask questions if you have any
​
​