How do you choose your friends?

How did you become friends with your current best friend?
​
[/size]
O

Original poster
I don't know if "choose" is quite right for me, since that implies more of a conscious decision, and I think I've been more subconscious in my selections. I suppose finding people that share a common interest.

As for my current best friend... I think everyone is tired of hearing that story!
E

Original poster
You can choose friends...? ;)

For me it's more of an instinct about someone, then talking to them. And... not going to go into that. But I don't have a single "best friend"; I have a [complicated] system of good friends, favorite friends, and friends. "Good" and "favorite" being subsets of the "friends" category, and you can belong to either or both. Though I often say "best friend" just to make it easy on everyone. Then I'm referring to quite a few people... You might have heard me say "one of my best friends" before?

Two of my current "good/favorite" friends I met through blogs and journals. (One of which, yes, I have met offline!) :3 Another I met through my knitting group and school friends. And let's see... a couple I've met through Moonwings and Iwaku, because yes, I count a few of you among my best friends. :)
F

Original poster
I think, therefore they exist.
I

Original poster
I choose them by loyalty and time. Not everyone I meet becomes my friend. There are a lot of backstabbers out there. Asshats that try to win me over for some strange and unknown reason, and my back's too small to be stabbed repeatedly. :/ So, i choose them by their choices. If they choose to hang with me over a video game. Give me advice, be that leaning shoulder when I spill my drink, talk to me and listen even though they may have already heard that story before.

Stay loyal and over time, I'd cling to them.

I'm a paranoid loner who hates the world!

Seriously though, I know a lot of people but consider few of them friends. I am too picky, un-trusting and yes paranoid to make many friends. People, most I seem to meet IRL, always want something from me and I'm not down for that. You wanna kick it, pay the man! That's how I roll.

As for a best friend, I've had a couple of those. Not anymore though.
F

Original poster
I don't really choose friends... they usually choose me, and thankfully, most of them have been good people. I'm way too shy to open up to most people about what I'm like and about my thoughts without them picking at me first.
S 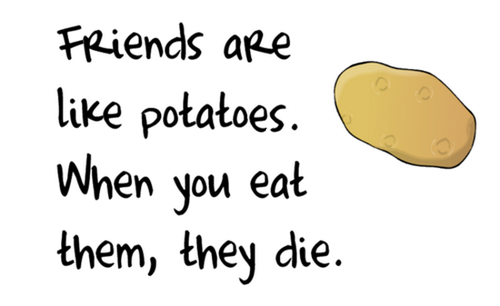 I don't choose my friends. They choose me. We choose each other.
Without effort. Like, friendship just happens. It should just BE, ya know? I don't TRY to make things work, they just magically do. And therefore, we are friends.

My "best friends" have fallen usually. Former best friend "forever" is really distant, and I feel used often by her.

My real best friend I think for life now is a boy I've known since freshie year of high school. I started really hanging out with him Junior year, and like alllll of senior year, and he is just amazing.
I love him so much in my heart.<3 As a friend. But, no one can replace him. He took me to senior prom, we have seen so many movies, played so many games, so many ice cream trips (CAPTAIN AMERICA ICE CREAM, FUHQ YEEEA.), etc. <3
He's coming up next weekend to visit me. >:D And we're gonna celebrate our birthdays then. YAAY.
Text daily. Advice, help, random talks.
Everything. I could go on about em, but dun wanna. CUZ HE'S MY FWIEND, NOT URS. >:C

OH.
My mom is my ULTIMATE MEGA UBER best friend though.

Original poster
I have about two real friends? Everyone else is a drinking buddy, or some chick I'd like to do.
K

Darkness said:
I have about two real friends? Everyone else is a drinking buddy, or some chick I'd like to do.
Click to expand...

So who's your other friend?
Kidding. But only sort of. >_>


Well, to rephrase the question for everyone in general...

[size=+1]What qualities draw you to want to be friends with someone ?[/size]

I look for someone who understands that I'm not really a high energy person. I'm a very a low key and mellow person. I'm kinda boring actually aside from the fact that I play games a lot and roleplay. Also, someone who shares a lot of my values towards relationships and school/work is also a huge trait they must have. If they don't value a friendship, then they aren't worth it to me. I enjoy laughter and silly things, but I do enjoy bonding as well. Gossiping is something me and my best friend do all the time. XD
V

Original poster
What is "friends"?
D

Kitti said:
So who's your other friend?
Kidding. But only sort of. >_>


Well, to rephrase the question for everyone in general...

[size=+1]What qualities draw you to want to be friends with someone ?[/size]
Click to expand...

Interesting lives and non-shallowness, or whatever.
S

Tacit understanding. It's something that is felt more than anything. I choose people as friends when:

Friends I value the most are those with whom I can simply stay there, not say a word to them, and know that it is alright anyway. Knowing that that other person is my accomplice, somehow.

I don't have many of those. Most I've met in school/highschool.

Currently, my best friends are two girls, one that I went to highschool with, and another, I met through a "brother" of mine.

I really had to work to find out that they were real friends. I kept getting distracted by other people and weird things.

The requirements for being a friend in my view is someone who you can trust with telling your secrets, your weaknesses, your fears and your flaws, and not have to worry about them getting thrown back in your face.

They've done me well so far, doing me favors such as trying to set me up with friends (Didn't work out for one, but the other one brought me to my current boyfriend of eight months.), Taking care of me when I'm down, kicking my ass when I'm being an idiot, making sure I do the right thing, and making sure that I stay on top of my goals for life. When shit hits the fan, I know I can count on them. In return, I bake them muffins, cupcakes, various sweets, buy them trinkets, go on outings with them, help with their issues, and accept calls in the wee hours of the morning when their trashed and drunk, because of something or other- they don't know, they're drunk and for some reason, they're in someone else's clothes. Normal stuff. You know, run of the mill. Nothing special.

Other notable friends are two of my boyfriend's friends, a rather intelligent self-acknowledged redneck, and a loaded college student.

The first is going to help me learn about handling guns and rifles and practice self-defense with me.

The second?..... He's rather interesting and I like poking at him to see what he says next.