Friday The 13th: Blood Of The Amazon 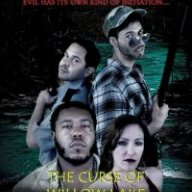 The attractive woman sits on the side of the bed in the rundown motel, her gaze staring off into empty space. This is Army Major Cassandra Jarvis and it had been nearly a month since her plane crashed carrying it's deadly and unholy cargo and stranding her in this backwater little town on the outskirts of the Amazon jungle. She runs her hand through her short blond hair and wipes sweat from her dusty brow. She was a jumble of nerves and apprehension, every small noise making her twitch. Suddenly a light knocking on the motel door jolts her to her feet and she quickly retrieves a loaded nine millimeter from her backside. Cassandra cautiously goes to the door, weapon at the ready...

"Who is it?" she asks in a hushed but stern tone.

"Major Jarvis I presume..." says the voice on the other side of the door.

Cassandra slowly opens the door a small way "Are you General Macallister's contact?"

Cassie narrows her eyes in suspicion, but after a few seconds opens the door fully...

Damian, a tall dark haired Latino man steps into the room "Much obliged..." he stops and notices the rundown and cramped little room "Nice place you have here."

"Cut the bullshit, I assume your aware of my situation Mr. Delgado." says Cassie as she slams door shut.

"Yes the good General sought it fit to inform me, but if you would be so kind I'd like to her it from you."

Cassie sneers and points the gun at Damian "First you tell me, what's your connection to General Macillister?"

Damian raises his eyebrows and grins "I know the good General a ways back, he and my father were good friends. He even had a hand in helping me to acquire a substantial bit of my property holdings out here. So when he contacted me a few days ago, he called in a few favors...and you Major, what is your relation?"

"Let's just say it's good to have an uncle so high up in the ranks. Help me to dig myself out of the shit heap I got myself into."

"So I'll ask again Major, for me to better understand your predicament, why don't you start from the beginning." says Damian.

Cassie takes a deep breath and slumps against the door "About six months ago I was given an assignment...Delta Four Level seize and capture of a classified target."

"...and what kind of man was this target?" asks Damian.

"This wasn't a man Mr. Delgado, this was a monster. An unprecedented biological aberration that was responsible for over two hundred savage murders. His name was Jason Voorhees, a mongoloid mutation that had somehow gained hyper accelerated healing and regenerative abilities that made him nigh invulnerable." says Cassie.

"Which is why I surmise the military took interest once they got wind of this Mr. Voorhees. Was there any particular reason that they chose to assign you to this mission of capturing him?" asks Damian.

"Well other than my specialized training in tactical reconnaissance and recovery, it turned out I had a somewhat personal connection to Voorhees."

"My cousin Tommy had more than a few run ins with Jason that extended well into his adult years, that eventually drove him insane. My superiors thought that giving me this assignment was more than fitting. I readily accepted, eager to once again prove myself. We were sent to a place called Crystal Lake, with the express orders to capture and or subdue the creature so that the military could somehow reverse engineer his seeming immortality for future use in a more enhanced combat soldier."

"Than what happened Major?" asks Damian.

Cassandra's demeanor grows more solemn and dire as she stares on "That hockey masked wearing son of a bitch nearly wiped out my entire unit in a single night. By day break it was only me and my second lieutenant until we finally managed to subdue the bastard with a powerful nerve agent. The amount of gas we employed was enough to kill fifteen men three times over, yet it was only sufficient enough to sedate Voorhees for about twenty four hours. We quickly loaded up the target in an aerial transport to arrive in a joint top secret base in Bolivia to begin the reverse engineering analysis."

"So I take it you never arrived to your destination."

"Mid flight, Voorhees broke out of sedation and proceeded to kill the flight crew. We lost altitude and I managed to parachute out before the plane crashed."

"...and it's your belief this Jason is still alive out there in the jungle?" asks Damian.

"I know that murdering son of a bitch is still alive. Anyway I managed to get a hold of my uncle and he used his connections to set me up in this rat trap until I could muster up some reinforcements to head out there and find this fucker and get him back to Bolivia."

"Why not just go to the U.S. Embassy?" asks Damian.

"I was put in charge of a Delta Level Four seize and capture highly classified mission. My failure could result in my immediate court marshal, Mr. Delgado."

"I see..." says Damian as he reaches into his pocket and pulls out a crumpled piece of paper "Tell me, does your infamous Mr. Voorhees look anything like this?" he says as hands the paper to Cassandra.

Cassandra opens the paper and looks, astonished to see a crude drawing of what appears to be a hulking figure of a man in hockey mask "Where did you get this?"

"I own several land development complexes around the Amazon Basin and adjoining valleys. About three weeks ago several of my workers have inexplicably gone missing or have turned up dead and mutilated. The deaths are not exactly attributed to the normal rain forest hazards. On a more recent incident, there was a lone survivor who drew that rendition on what he says attacked him and his co workers on a logging trail in the jungle. So when your uncle contacted me about locating you and assisting you in whatever way I could, and the way he described your situation...needless to say I took an immediate interest."

"We have to find this, this thing and put him down. If left unchecked Voorhees could possibly murder hundreds, even thousands more." says Cassandra urgently.

"Is is the innocent lives you truly care for Major, or are you just interested in salvaging your career?"

"I could ask the same of you, or are dozens of dead workers not bad for business Mr. Delgado?"

"Touche, my dear. Follow me if you would than, to find this monster we go aye."

Name: Cassandra Alexia Jarvis
Age: 29
Occupation: Army Officer (Major/O-5)
Height: 5'9
Physical Appearance: View attachment 87032 Personality: By the book and numbers, no nonsense attitude. She takes her job more serious than most. She has a dry sense of humor and tends to be a pessimist at heart. Always feels the need to prove herself.

Bio: Cassie Jarvis was born the only daughter of two working class parents. She grew up a mostly normal and happy child until at the age of seven she was sexually molested by a family friend. The abuse lasted until she reached fifteen when she finally told her parents. Her father nearly beat the man to death, which only resulted in him serving jail time for attempted manslaughter. The abuse and her father's incarceration served to psychologically scar the young woman to her core. In an attempt to deal with her childhood trauma, Cassie decided to pursue a military career.

She developed into the proverbial over achiever, adopting a rigid militaristic like lifestyle, both in and out of uniform. She has grown emotionally cold to the world and although considered quite the beauty, she shuns all male attention, seeing all men as sources of potential pain. Recently she was assigned to lead a top secret recovery mission of an infamous serial murderer known as Jason Voorhees. In an attempt to capture to creature for military study, her entire unit was wiped out, leaving her to face the monster alone. She succeeded in subduing Voorhees, but during his over seas transport to a classified base in Bolivia...Jason broke loose and caused the plane to crash in the middle of the jungle.
Last edited by a moderator: Apr 22, 2016

Personality: Has a mind geared towards business and mostly profit. However despite his business oriented mind, Damian is adventurous and is a big believer in equality and fair play. Has a very laid back nature...
Bio: Damian Delgado was born as one of three sons to a wealthy financier. Damian was born as a child of privilege in his native Argentina and grew up receiving the very best in education and luxury. While his two older brothers squandered most of their vast inheritance, Damian was wise with his share holdings, expanding both his already formidable education and his travels. Becoming fascinated by the numerous indigenous cultures of his native South America, Damian sought to study and learn many of them, becoming fluent in over a dozen pre-Columbian languages and dialects. His business ventures also expanded and Damian increased his property holdings and set up several lucrative mining and developing projects throughout the Amazon Basin. In the process he makes it a point to employ many of the native populations, giving them fair wages and comfortable housing. He has also set up numerous educational complexes. He has developed a reputation for being a generous and fair minded tycoon, while growing his sizable fortune and building a standing as one of the wealthiest men in the western hemisphere.
Show hidden low quality content