Just make up a character and use moves from stuff like Street Fighter or something. Make a DBZ/Regular Show esque plot out of the nothingness with supernatural martial arts, crazy characters, and more as your resources.

1. in your first post, detail your character's appearance. Throw in pictures if you can, word them enough for us to paint a picture.

4. You have to 'learn' new techniques and train to become stronger. You start off with Two special moves. 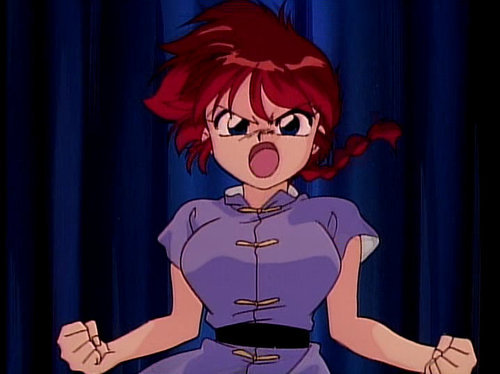 Outfit: (But the gi is blue, and the shirt under is red)

Nash was out and about: Today was a great day to do some more Kenpo training, what with all the leather wearing biker punks riding around in the nearby desert, waving weapons such as battle axes, chains, crossbows, and other such tools of great violence, celebrating the robbery of a caravan.

Dinner back at Tokyoronto City could wait!...

Nash dashed over to a boulder, and watched the punks for a bit, before zipping off the small canyon he had been walking on.

"KA~KAKAKAKA~!!" Laughed Nash menacingly, as he imagined the damage he'd do with his two new signature techniques…Then, he could use them later in one of the local arena matches back in the city!...

One of the punks saw Nash coming in, and had no clue what the hell was going on, but stupidly, they just rode at him, expecting an easy kill.

Nash lunged out towards them, and did a MUTHAFUCKIN' SPIN KICK!! knocking off three dudes off their bike rather awesomely, as he landed on his feet, crouched, then standing, and cracking his knuckles.

He surveyed the area for all the other goons there, and smirked at all the number of thugs there for him to fight.
O

Shit. Did that guy just kick them off of motorcycles. "Hey! Lookout!" he screamed after the guy, noting the man that was pointing a gun at him. Shinsou appeared almost instantly in-front of the man as the trigger was pulled, speeding his katana out of its sheethe and blocking the bullet. He then used more of his speed to get behind the gunman and slashe his back around, dropping him.
A

Original poster
Nash blinked at the movement of the newcomer, and glared. This idiot just took his kill! And with a weapon no less! Nash charged towards the swordsman, leaping into the air, and trying to perform a heel drop onto the fellow's head, and perhaps get a good workout out of this little scuffle.

"COMEDOWNMOTHERFUCKER!!!" Nash roared at the last moment, when he was nice and close to the swordsman, and his choice of reactions were going to be limited.
N

Chun-Li was walking around the streets, she just won a battle aginst some dude that though that could beat her. She was wearing her blue battle suite, she wasnt hurt from the battle she had earlyer. While she was walking around the city she noticed some punks that were beatun up from two guys, Chun-Li smiled at the guys, one of the guys had a big sword on his back he looked calm and strong and the other one was in the air trying to perform a heel drop he was looking stupid. Chun-Li quickly runed betwen the guys befor the stupid looking guy could land his kick and quickly grabed his leg smashing him in the ground "Try again" she said smileing at him.
A

Original poster
whatever im out of this rp bye :D
A

Original poster
Sshinsou had let his guard down. Fellind the rock hard heel meet the back of his head was a surprise. He flew forward a few feat, doubling over before landing on his feet and sliding in the off-road dust. "I just saved you goddamn life. Looks like I shouldn't have. Don't worry, I'll make sure it doesn't last much longer. He wove into the seals of the Tiger, Dove, and Hare. "Leaf Disappearance Jutsu" Hundreds of leaves from nearby tress swarmed him. As they fell to the ground, he was nowhere in-sight. He reappeared quietly behind Nash, Sliding one of his knives up to Nashes throat. "Any last words?"
A

Original poster
Nash watched the sword wielding warrior claimed to have 'saved his life,' then disappeared with the leaves, only to reappear behind him. He suddenly had a blade to his neck, and stared down at the weapon, before moving his left hand up slowly: and gripping the weapon by the blade. Blood began to seep out of the new wounds upon touching the blade, but they seemed to mean little to him, gritting his teeth, and curtains of shadow falling over his eyes.

"Haaaah…." Nash began to chant, gathering strength, clenching the blade as tightly as he could. Then his eyes flashed wide, and he began to roar furiously with a voice that could challenge the harshest of Thunderbolts.

Nash's arm flew into the air and lifted Shinsou into the air, still gripping the blade, and trying to toss him into a nearby rock formation in the shape of a tower, his upper body muscles expanding slightly.
O

Original poster
As Nash tried to throw him with the blade, He let go of it, making the action of him grabbing it useless. "Idiot" he said with a smirk as he brought his sword up, and then back down onto Nash's back.
A

Original poster
Nash didn't bother with dodging, and felt cold steel penetrate flesh. One eye widened, but his expression didn't change much, forcing the blade out, and turning around to face Shinsou, the blood soaking the back of his clothing, and some of it getting to the front, as he charged in with a barrage of jabs with his left fist to start things off.

The speed he moved at rivaled that of a skilled quickdraw gunman with a pistol, and to top it off, he was striking in multiple directions at once, creating several afterimages. For now, he had to test the swordsman, and gauge his skills a bit...

Original poster
Shinsou took one fist after another to the face before he finally got the sense to catch the boxers left fist in his hand and bend it back until he heard a crack. Yet, this guys right fist was still beating him, and he was forced to let go and kneel down to him. "Good Fight."
R

Original poster
A man, barely in his twenties and dressed in a suit that was not unlike that of the mobsters of many years ago, sat, watching the battle. He was apparently well entertained as his mildly pale, slightly square face was set in a smile and, as soon as the fight ended, he clapped. "My my. That was quite the fight. Rare to see anything beyond half-assed fighters now a days." He stood up, brushing any sand that had gotten onto his suit off before tipping his stylish, black hat at them.

"Personally, I would like to fight as well but, seeing as you are already injured, that wouldn't be sporting."
A

Original poster
Nash huffed at the idea that his left hand jabs caused so much difficulty for the swordsman. It wasn't until his miraculous right hook to the cheek had fired forward and managed to stop Shinsou in his tracks for now.

"I didn't even need a special technique for you…But I have to admit, in your respective style, whatever it must be, you seem skilled. I prefer unarmed combat myself."

Then, he sensed a new aura appear, and turned to face the man in the suit, and how he'd paid his respects. The first insult however, came when he claimed they were too injured to fight.

"Nonsense. All I got to do was throw a couple jabs" Explained Nash, as if throwing 50 punches with one arm in mere seconds were nothing. "I'd be more than happy to face your style."
S

was walking through the desert with only his sword

and some money. He was smiling beacausehe had finally mastered a secondd technique and was eager to test it when he noticed three people standing around. One looked badly injured the another beat up the third looked fine. this will be interesting he thought. He decided to get a bit closer and wait.
O

Original poster
Shinsou noticed a man with a sword approaching them and he grabbed his own. "Finally, someone who fights with a sword around this hell-hole.
S

Original poster
"oh dear" Aiden muttered "i seem to have drawn attention to my self all well" he said with a slight smile. He pulled out his emerald green sword and walked forward. "I'm Aiden Hart. Son Of the Swordsman Of the Green Mist" He continued walked Studying the man with the sword noticing his confidence and strong stance. This will be interesting he thought i may even need to use that technique. He stopped Halfway to the man and stood there waiting.
Show hidden low quality content
You must log in or register to reply here.
Share:
Reddit Pinterest Tumblr WhatsApp Email Share Link
Top Bottom