Four years can change a person. (For Sweet_Temptation)

Original poster
It has been four years since High School graduation. Four years since Zack and Logan had their last chance to admit how they felt for one another. Logan thought it was one sided and kept it to himself in fear of losing his dearest childhood friend. Logan joined up in the Air Force and has grown into a fine young man. He looks nothing like the boy he left as. Strong, well built, more masculine looking, and more confidence and command in his personality thank to his rank. Logan decides it is time to settle down and hold a steady job at a local precinct. He was still a fairly new cop and he chose to work at his hometown's police department. He wasn't sure Zack was still there, but he thought now he could come back and live here again without worry of one sided feelings keeping him from his friend. Especially since he is moving there with his new boyfriend. 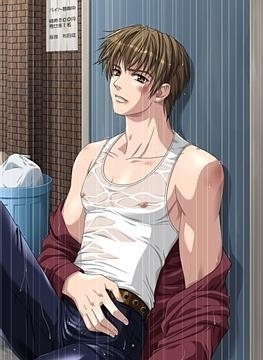 He met Logan while on a mission that he had to work with the Air force to complete. It seemed Leon was very interested as Logan tried to Persue and they soon became involved after his mission. But now it seems Leon is more cold and aloof with him. Doesn't really care where Logan goes or what happens. Having the mind set of "we are soldiers. we die when we die.". Logan thought maybe if they moved from washington and to his hometown Leon would relax and be more like who he was when they first started.
C

Original poster
Four years...had it really been that long since graduation...since everything had changed? He still couldn't believe it. Everything still looked the same, but he knew that was far from true. He wasn't the same, neither were his friends, or even Zack. He probably wasn't even here anymore. He let out a sigh as he looked around some more before he finally parked into the driveway of his new home.

It was time for a change of pace, a slower pace. He had lived in D.C. for a few years now after he got out of basic training from the air force. Things there were just getting too over whelming for him, and he knew it was time to slow down and just live life for a little while. What better place than the town he was born and raised in? He had heard they were in need of officers on the force and he all but jumped at the opportunity. This was the perfect chance, for both of them.

Logan stepped out of the car and smiled at his surroundings. Nostalgia filling him up. So many memories, so many joys, tears, and unspoken words. Time really can steal things away.

"If you are done staring. I could use some help with these boxes." Logan snapped out of his thoughts to look over at the voice that called out. He smiled sweetly at the older blonde male and nodded. "Right sorry about that. It is just amazing to be back I guess. Didn't expect to change but still look the same all at once." he admitted. The other man just grunted as he continued carrying things into their new home.

That was his other reason for coming. Lately he and his lover seemed a bit tense, to say the least, He seemed more cold and aloof towards him. Nothing like he was when they started dating about two years ago. He thought maybe his job was getting to him, that maybe the life an agent was making him testy. so he thought this move would be good for both of them. He'd be away from the hustle and bustle of the city of D.C. that always ordered him around. And maybe they could reconnect and be like how they use to be.

Well; no matter. Today they would move in their things, unpack a little, and tomorrow he would introduce himself to the precinct as their new officer. Then he could begin his new..quiet life
Show hidden low quality content