200 years have passed since Lucina and friends travelled back in time to try and destroy Grima. They succeeded in sealing him, but they did not finish him completely. His minions still wander the earth and control much of it now, including the Fire Emblem. The land has calmed down somewhat now. The Risen are much less destructive, and act like a military dictatorship, ruling over the normal people. 3 days ago, discreet messages were circled around about developing a rebellion against their zombie overlords. Curious, several people have gone to the meeting point, a grove within a forest several hours from Ylisstol (the capital city of the land) to lend a hand.

So, yeah. basically, fire emblem RP. Classes can be from any game. Please provide a link to the wiki entry for the class, especially if it's from a japanese-only game that most people haven't had a chance to discover. Characters will start at level 1, and may have 2 ancestry skills (skills handed down from parents), as well as their level 1 class skills and a Personal skill which can be anything (provided it's not too strong.) If you're unaware on how the personal skill system works:

In Fates, each character has their own special skill that they and only they can learn, and that can never be unequipped. This consumes a 6th slot, so they can still have 5 other skills. For example, Anna, the merchant, has a Luck% chance to gain a 1000 gold bullion upon killing anything. The ability that does the same thing on the Mercenary class would theoretically stack with that, for a 2xLuck% chance of getting 1 bullion and a half luck% chance of getting 2 of them.

There will be opportunity to reclass to gain that OP af Astra / Lethality / Rightful King combo Great Lord we all love. And on the note of Great Lords, you can use classes like those too which would be unique to "main characters", as long as you come up with a valid reason they'd have it, ie they're the descendant of one of them.

CS:
Name:
Gender:
Appearance:
Age:
Personality:
History: (Including why they decided to rebel)

Class: (Level one of any base class. Please provide a wiki link to the class, too. Any class from any game is fine.)
Skills: (Level one skill of the base class, + up to 2 ancestries, + 1 personal)
Weapon: (No powerful ones like named items or Brave items, yet)

I shall recreate Selis here. Be in a bit.

Skills: Magic +2 (normal skill), Hex (Ancestry skill), Chainfire (Personal skill; enemies close together within a three block radius is hit with a stream of fire. Does mild damage to enemy.)

Personality: Selis is a kind girl and has wishes for everyone to get along. She is soft spoken and some would call her shy. She has a love for playing music and will sometimes incorporate that into her spell casting. When she feels that her friends and comrades are in a tight spot, she will push away her timidness and put her all into fighting.

History(optional): Selis is the ridiculed child of a mage and a dark mage. Do to her parents lack of support of her choice in magic, she was placed into the care of her aunt Selina, an almost always tipsy fire mage. Under the happy woman's tutelage, Selis became more adept in the fire magic than any other type of magic.

Other: not at the moment

Questions or Concerns: Need me to change anything, just let me know.
Last edited: Sep 22, 2015
S 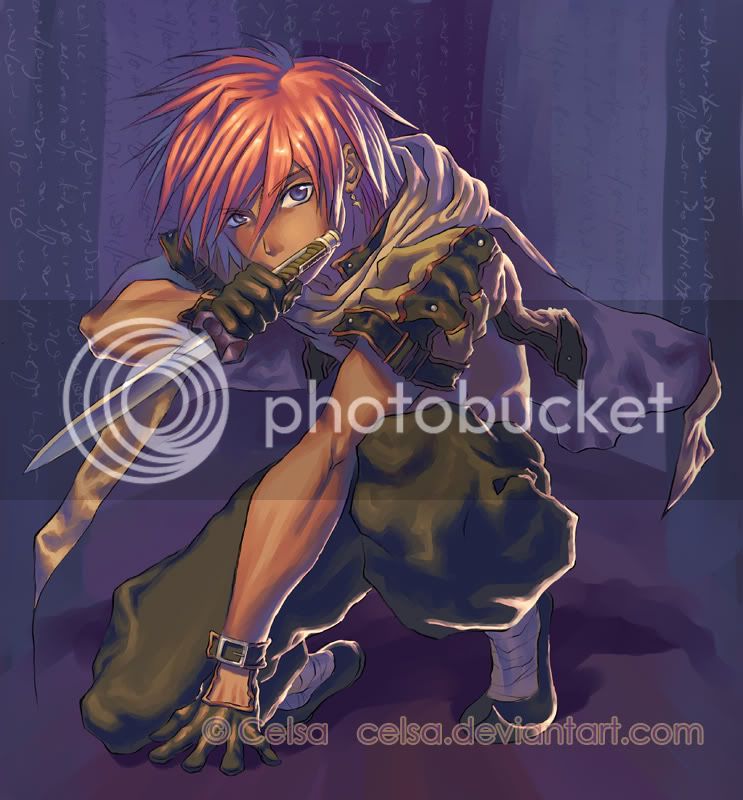 Age: 22
Personality: Jay is a thief he doesn't care much for others, he only looks to help himself and if he helps someone else in the process it wouldn't change his mind. Jay is quite the talker if he can't sneak or fight his way out he becomes quite the talker.
History: Jay grew up on the streets, he stole, he cheated and scammed his way to buy his first weapon; a dagger. Once he got it he got a lot more confident in his abilities and began to steal from houses of the rich and poor alike it's not like he cared. He began to slowly get more and more confident going for higher and higher stakes until one time he was finally caught by a guard that came out of no where and during the struggle Jay ended up stabbing the man. On his escape he wasn't able to get his dagger back so he took the guard's sword and ran off as fast as he could until he was outside the town to lay low. During these years he heard words of something coming back never knowing what anyone was talking about in their cambers while he stole from them. One day he got word of a rebellion and he had always been one to rebel this might make his line of work easier and it might even pay well so he set off the join the group.

Class: Thief ( Thief )
Skills:
Steal: Jay is able to pickpocket non equipped items from enemies he is next to.
(Personal:) Artful Dodger: Jay has a higher chance of dodging enemies that his weapons are neutral with and twice the chance with weapons he's better against. + up to 2 ancestries)
(Ancestries:) Lock Touch: Jay can unlock locks with no keys or lock picks. Vanishing Act: Jay can turn invisible but cannot attack while invisible until the following turn.
Weapon: Iron Sword
Last edited by a moderator: Sep 22, 2015
S

Karakui said:
You have 59 minutes. Can't do an hour I'm afraid.
Click to expand...

Sorry did it too quickly... But I don't really know what to do with the ancestries for a thief class.

Oh damn, that Steal is one awesome ability. As for ancestries of a thief... they're not very combat-built, so I'd probably give them abilities that boost Avoid Chance, or perhaps Locktouch which lets them open doors and chests without keys/lockpicks.
S

Karakui said:
Oh damn, that Steal is one awesome ability. As for ancestries of a thief... they're not very combat-built, so I'd probably give them abilities that boost Avoid Chance, or perhaps Locktouch which lets them open doors and chests without keys/lockpicks.
Click to expand...

That's all good then. Feel free to post on the IC whenever it's made. If I forget to make it, you have now earned the right to pester me about it :D
S 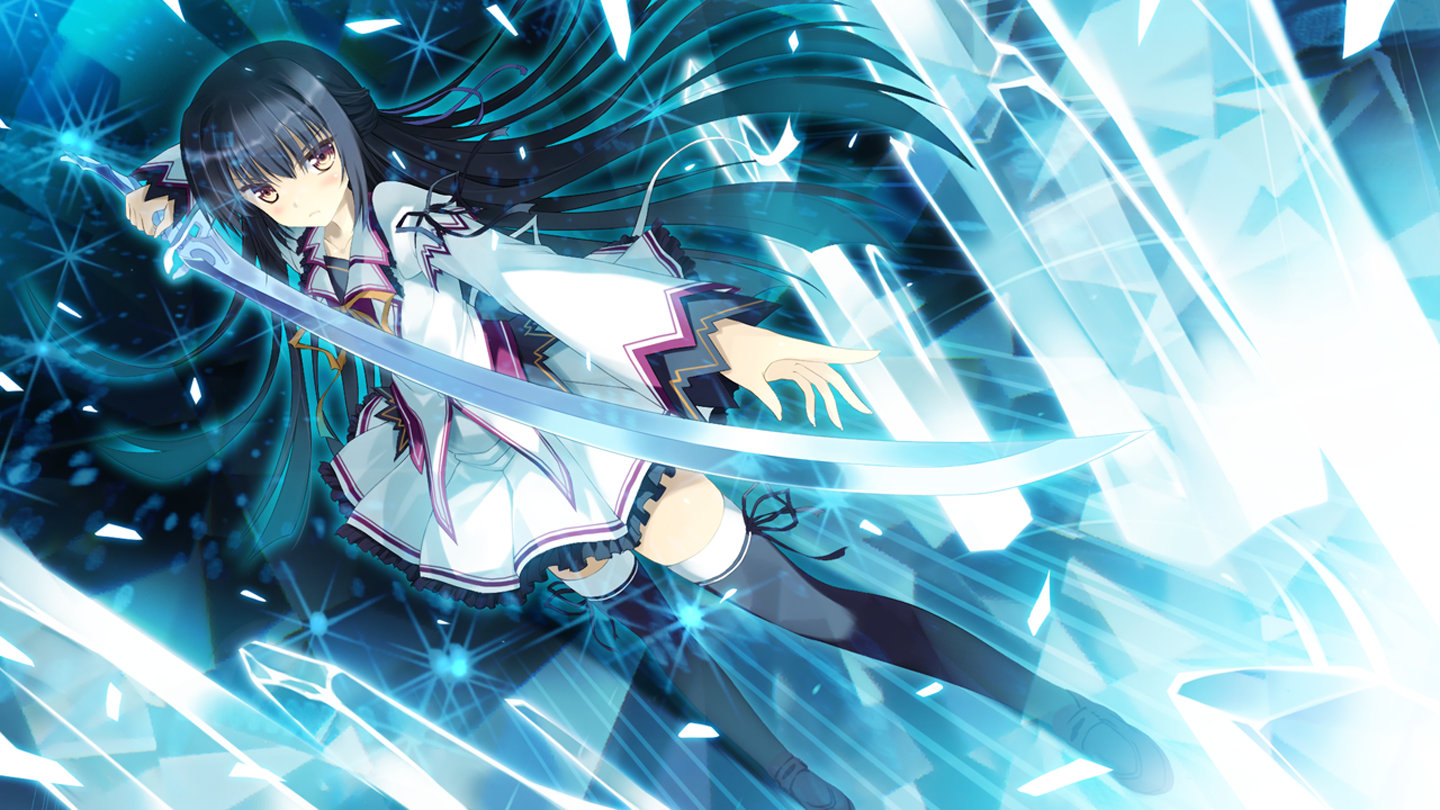 Age: 19
Personality: Shiori is a "silent and serious"-type character, typically. She has great focus on her objectives and always sees them through to the end, no matter the cost. She can have a sense of humour, but her paranoia usually hides this very well.
History: To be revealed IC, but rest assured it exists and I'm not just being lazy :D

Class: Nohr Princess
Skills:
Personal - Arcane Blade: Attacks made by Shiori can use either Defense or Resistance for damage calculation, using whichever is lower.
Ancestry - Aegis: Halves damage taken from ranged weapons.
Ancestry - Magic Counter: Attacker takes the same damage that Shiori takes, if they attacked with a tome.
Class Skill: Receive 1.2x exp (redundant for this RP but whatever)

Am I allowed to pester you as well,

No. That would be impossible. If you tried, you would find your keyboard mysteriously disconnecting from your computer.
Reactions: Goddess of the Moon

Lol. That would be funny if you tried.
S

Cybermoon said:
Lol. That would be funny if you tried.
Click to expand...

Don't underestimate her... she is powerful...

It is true. I have eyes and ears everywhere. Look around you. That man over there with the hat. He's one of my ears. The little girl playing with that toy. That's one of my eyes...


In other news, "Eyes and ears everywhere" has given me an awesome idea for a horror RP.
S

Karakui said:
It is true. I have eyes and ears everywhere. Look around you. That man over there with the hat. He's one of my ears. The little girl playing with that toy. That's one of my eyes...


In other news, "Eyes and ears everywhere" has given me an awesome idea for a horror RP.
Click to expand...

Oooh link me when ever you make it

Silverdawn said:
Oooh link me when ever you make it
Click to expand...

Karakui said:
It is true. I have eyes and ears everywhere. Look around you. That man over there with the hat. He's one of my ears. The little girl playing with that toy. That's one of my eyes...


In other news, "Eyes and ears everywhere" has given me an awesome idea for a horror RP.
Click to expand...