Fel Wants to Make a Comic!

Original poster
All ye Iwaku-tans and other Sentai people from the Cbox come hither and post what you want to look like!
F

Original poster
I can't believe I fell victim to this. Oh well. 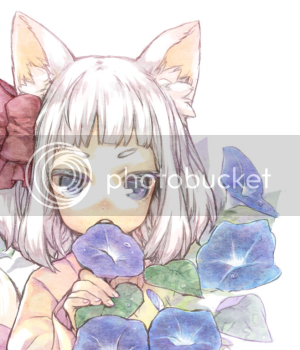 Yellow Iwaku-tan: bunny boy who can't keep his hands off of any boy that is even remotely attractive. Carries around a whip, though it's not often that it's used for fighting... Heh.

Preliminary drawings to figure out what everyone looks like (while sticking close to the aforementioned pictures): 20%

We are currently going to attempt to split the comic into both a more traditional panel by panel over arching story. The other half will be a 4koma style that is more comedic and focusing on misadventures between Blue-tan and Red-tan.

For those of you that have a Tan profile on the site so far, we're asking for you to please come up with a real name for your characters whenever possible. We'd prefer that it not be your normal user name.

Thanks for the support thus far!

Original poster
Nah, only if you want it to be Japanese. Red-tan's real name is Hallie and I forgot what blue-tan's name is...

No, the names don't need to be Japanese but they will be drawn in manga style in order to keep with the origins of the meme explained below.

To put this whole "-tan" idea into an understandable expression...-Tan is another way of using the suffix -chan (is a mispronunciation of Chan (ちゃん?), an informal, intimate, and diminutive honorific suffix for a person used for friends, family, and pets).

For those that are curious, please take a look at this wiki!
O

Original poster
"Papa Fel, why did you name me after two mythical places? Avalon Shambhala is very odd. I wish the others didn't always call me Ala."

*stuffs Green-tan back in her overly decorated box*
F

Original poster
Black-tan's name shall be...

Original poster
onee-san is Kate or Kat...USE MY NAME! I HAVE ONE YOU KNOW IWAKU-TANS!!! D: everyone just knows me as Onee-san because of the iwaku-tans...I have lost my identity ;___;

White-tan's name is Shiloh. Please call me that...
T

Original poster
PURPLE IWAKU-TAN!
Real name: Mimi. A dedicated cosplayer who loves her family, is super friendly, and will do what ever she can to help, no matter how large or small the task! :3

Original poster
...I think that sufficiently sums up the Iwaku-tan sentai team! Please refer to the Iwaku-tan group for more information!

LURKER MEMBER
FOLKLORE MEMBER
Isabellas feel tempted to follow this trend... but what sort of colors are left for Isabellas? Isabellas all ready know what they look like though..You can tell by their avatars..

LURKER MEMBER
FOLKLORE MEMBER
ISABELLAS FOUND IT! They like shiny stuff and glow so much because they are SILVER!

Alright, apps are now closed for any new characters. Thanks for sharing your interest in the project.
S

Original poster
o_o
These are the priviledges of being an admin type.
<3
I admire all of you.~ n.n