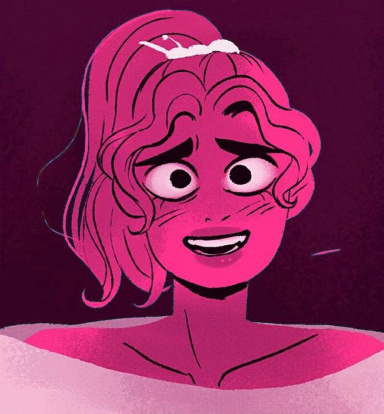 Once upon a time, there lived a terribly lonely man. He spent most of his days secluded in a hut that stood at the very top of the highest hill in the village, and though not completely alone, he was aware that there were other inhabitants living at the foot of the hill. Alas, they were separate. The man was unlike the villagers he so desired to live amongst and knew he could never be apart of their world. To do so would bring certain disaster.
One day, the companionless man was approached by a strange four-legged-creature, whose sleek, coppery satin-soft fur gleamed brilliantly under the moonlight. “The Cat,” was its name. Respectfully, the Cat bowed her head and confessed to the man that she had been watching him from afar for some time now; that she was mystified by his appearance and couldn’t help but be drawn to him. Her only wish was that he would permit her to stay by his side. A wish only he could grant. Looking thoughtfully down at the Cat, the man allowed a faint smile to grace his lips. He became overjoyed that he’d finally found someone he could truly call his friend. The Cat, a loyal creature indeed, was faithful to her words and never left the man’s side. Not even for a moment.

From his friendship with the Cat was born a magnificent idea. A wonderful possibility. And so the man devised a plan—a plan to bring all of those that were like him together.

With his best ink and writing brush, the man composed a collection of formal invitation letters. “I am having a banquet tomorrow,” the invitations read, “and I invite all of you to attend.” But one of the animals, a troublesome rat, was mischievous and loved to play pranks. He lied to his neighbor, the Cat, and informed her that the banquet would be held the day after tomorrow, and so she should attend then. On the day of the banquet, the cunning and clever Rat rode in on the Ox’s back, then, in an exuberant fashion, leapt effortlessly down to arrive first of the twelve animals at the celebration. After him came the Ox, the Tiger, and the rest of the animals. They all ate and drank their fill, feasting merrily until dawn. All of them, that is, except the Cat…

The Sohmas are an elite clan cursed to contain the spirits of the Chinese Zodiac and act as their physical vessels. Those who have inherited the curse transform into their respective Zodiac Spirit whenever they are hugged by a member of the opposite sex. The Sohma Curse is actually a bond that exists between God and the thirteen animals. This bond has supposedly existed for generations and is the result of a spell that was cast by a man believed to be their God. According to the Zodiac legend, this man possessed otherworldly powers and had lived many lifetimes. It was said that his memories stretched back to millennia and this frightening realization made the man understand that he was, in actuality, not like other humans. And so the man chose to live in voluntary seclusion from the rest of society, fearful that he would be hurt by the humans who were different. When the spell was created, it was done out of love and in the hopes that God could preserve his bond with all of the animals, so that even as their lives ended, they would be reborn anew, and their friendship would last for eternity.

Heya!! Literate/Advanced Literate/Novella female writer here looking for a male roleplayer (or literate female roleplayer who is able to play male characters) who has seen or read the Fruits Basket anime and/or manga. A few things about this RP: This is a 1x1 OC only RP. No canons. Same universe, totally different characters and completely different plotline. While our take on the story will still maintain the same supernatural twist and other information pertinent to Fruits Basket, do keep in mind that this roleplay will not be a retelling of events that have already occurred in the series between previously established characters. Let’s make this story our own!!


The plan is that one of us will play a human with no previous connections to the Sohma family and the other one of us will play either the Rat or the Cat Zodiac Spirit with whom the human attends the same high school with. We will discuss more upon arrival.

If you find yourself interested, please feel free to send me a message here or via Discord (Pinkie#4790) and I will get back to you ASAP with my ideas and a further, in-depth explanation about the roleplay. We can establish our characters, who wants which roles, how we plan to introduce or OCs, etc. etc. I will also be open to any questions you might have, as I’m sure there are a ton!!

Art by lluluchwan on DeviantArt​