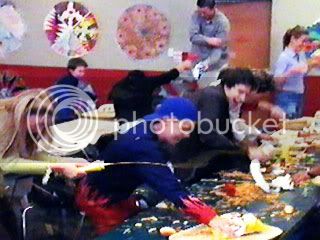 Have YOU ever been in a Food Fight ?

Food fighting in a cafeteria can be wild, fun, and memorable, but it can also be a messy waste.

How do you feel about Food Fights ? Have you ever been in one ?

IT'S SO HARD TO VOTE!

never been in a real food fight though. I mean like... on a large scale. >>; There was always talks of doing it, but everyone would pussy out.
D

Original poster
I was in two in school and each time there was hell to pay for it, but god it was so much fun. Its amazing to see where things end up. We had to clean up the mess and do detention, but it was fun to see the mess.. and yeah I stunk on the way home, but it was 8th grade after all. :)

I think I was once in one in kindergarden, that was it though...

Would be kind of a waste of food nowadays considering people are struggling to pay their bills and are on food stamps so I wouldn't really wanna get into one now..:P It's something I've outgrown...
D

Original poster
No because in my school we weren't faggots.

Seriously when I think back I don't think I've ever been in a food fight.......Although I may have thrown some idem of food at some point or had one thrown at me.

Original poster
No, but I'd rather have plastic BBs hit me any day.

I'd have to agree.
R

Original poster
It's 'couldn't care less.' What grammatical sense does could care less even mean? : <
W

Original poster
most schools in oxz dont have a cafeteria (sp?) though most have a canteen (line up and order food at recess and lunch if you wanna buy it, otherwise bring your own from home!)
C

Original poster
I was in a food fight once and it was really really messy. The bullets ranged from french fries to full bombs of hamburgers and ketchup, tomatoes cheese and a whole bunch of other things mixed together. It was disgusting, but we third graders didn't really care much. X] Good times, good times.
S

Well, today, this boy got into this argument with the cafeteria security guard because he wasn't supposed to be using his cellphone and the guard was trying to take it away. And so the boy, who looks like the hulk, high school version, took the tray of cheesy macaroni in front of him and threw it over the guard's head. And then his table started throwing their food at the guard. And most of the cafeteria was screaming 'fight fight' but the guard just dragged the kid outta there and then the dean came along and took the rest of them.

What would you think if, in response, his friends had started an all out cafeteria food fight instead of throwing their food at the guard?

What if some of those kids were paying for their lunches? How would you consider the foodfight, then ? Would your opinion be changing?
Show hidden low quality content