WHERE MY WHOVIANS AT?!

They all joined the master when he became a chick o_o 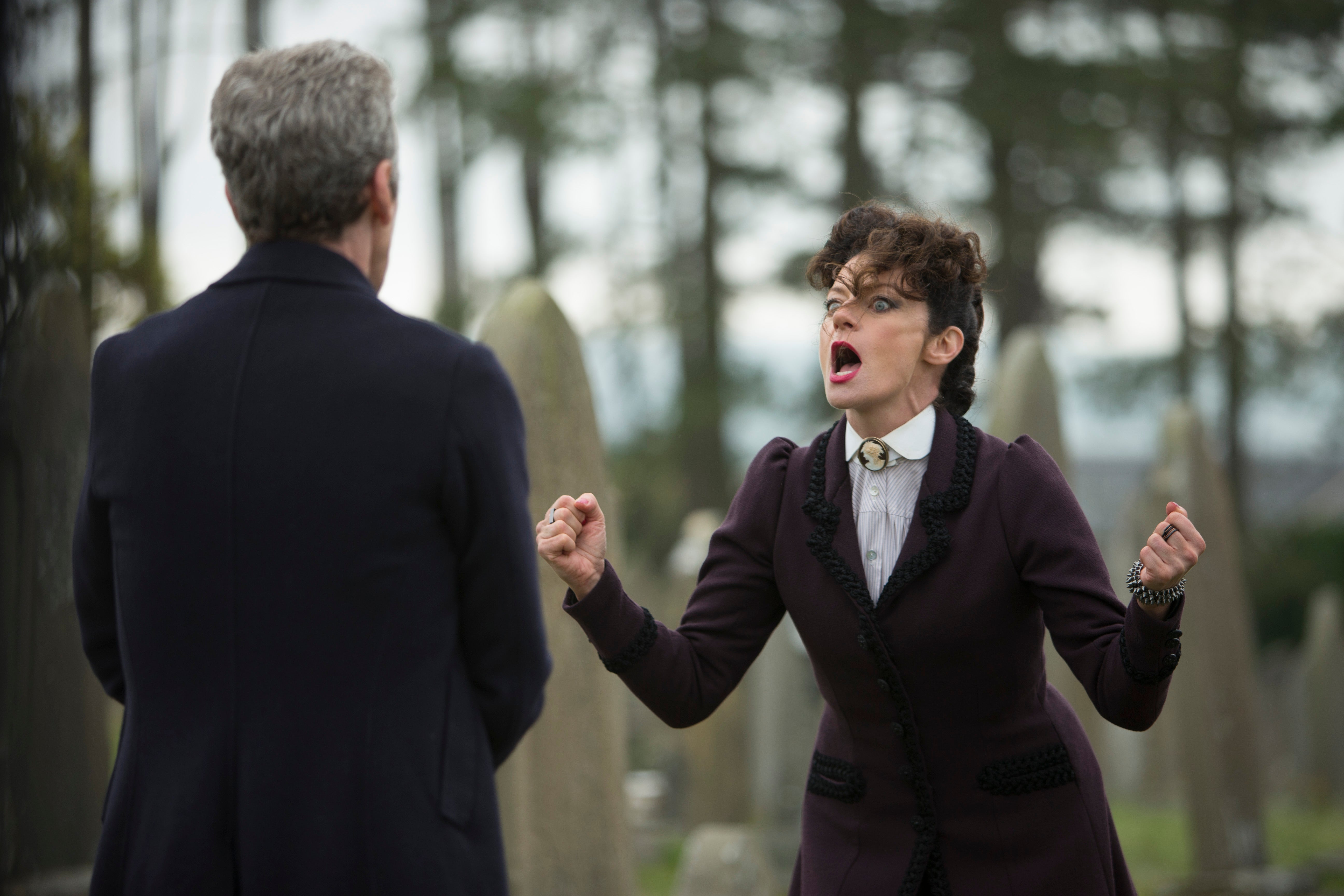 How can anyone resist that? :D
Reactions: Minibit
W

Dr. Who fell out of favor with me and my spouse during Matt Smith's little tirade. Something about him and how this niche little show suddenly exploded in popularity drove us away.

I just had an epiphany.

Matt Smith is the PewDiePie of the Doctors. Trying to be wacky, silly, and random to grab that younger audience with ADHD who like things to be out of place for it's setting and tone.

Watched one episode with Capaldi, we plan to catch it on Netflix or something when it comes up.

[spoili]Tennant best doctor.[/spoili]
Reactions: Turtle of the Tired and Koschei

Minibit said:
WHERE MY WHOVIANS AT?!
Click to expand...

I'm gonna raise both hands and a foot, here.

Got into Doctor Who with the 2005 reboot Tennant is best doctor yur argument is invalid, but after Moffat took over I've lost interest in the series. It has turned into something that's just moving further and further away from the whole spirit of Doctor who, and I find it extremely hard to take interest in Moffat's writing.

Got into Doctor Who with the 2005 reboot Tennant is best doctor yur argument is invalid, but after Moffat took over I've lost interest in the series. It has turned into something that's just moving further and further away from the whole spirit of Doctor who, and I find it extremely hard to take interest in Moffat's writing.

I'm currently trying to catch up on the Tom Baker era, but finding good material is fucking impossible.
Click to expand...

I liked the original series, before they brought it back in '05. I would really like it to die now, please. Shows shouldn't last this long.

*raises her hand* Here I am!

K05CH31 said:
I'm currently trying to catch up on the Tom Baker era, but finding good material is fucking impossible.
Click to expand...

Netflix hard-copy rentals has the majority of Classic Who if you're willing to spend a bit more money. Their collection isn't perfect, but it's certainly better than the pitiful amount of Classic Who that their streaming service offers. >>

Or if you're willing to step outside the limits of legal options, they're not too difficult to find online if you do a bit of digging. DailyMotion in particular usually has a lot of the episodes.

Anywhoooo on another note, I for one would like to say that I'm not a Moffat-hater. The show's certainly different in his run than it is in Davies' era, but I don't think that means the show "isn't itself" anymore because the show is always changing. I can see why a lot of people might think it's too different when they only knew the 2005 era prior to that, but, really, change of this sort is natural for the show. Davies was just one showrunner. He didn't define the show. Neither will Moffat. Things just change. Really, the entire show runs on change -- the Doctor, his companions, and all the writers -- nothing stays the same for too long. And that's why it just seems silly to me to give up on it so easily, because, I mean, come back in a few years and you might find that you love it again -- because whatever it was that you didn't like is already long gone. That's just how the show is.

I will say, though, that I think the transition from Tennant to Smith was horribly executed, and probably the reason why so many people stopped watching at that point. Because unlike in the case of nearly every other regeneration the show ever gave us ever, they just changed too many things at once. Most of the time, when the Doctor regenerates, they make sure he still has a companion that stays with him through it, and for good reason -- it gives the audience something familiar to hold onto while they adjust to a very new Doctor. This is what they did for the majority of the Classic Who regenerations, and even the other two New Who regenerations: from Nine to Ten we still had Rose, and from Eleven to Twelve we still had Clara. Even if you don't like Rose or Clara, the point remains that it's easier to take in such major changes in the show when other major things remain constant.

But with Ten to Eleven, though, we got: new companions, a new TARDIS interior, even a new screwdriver, not to mention a completely new showrunner who would bring a very different feel to the show. It's very easy to see how a lot of fans would see that as too much to adapt to, especially when most of those fans have only seen New Who, and therefore have not only probably gotten rather attached to Tennant, who had been around for so much longer than Eccleston, and when their only prior experience with regeneration was Nine to Ten and, once again, not only was the Nine-Ten transition much more smoothly done, but Nine was around for such a short amount of time that it's harder to become as attached to him. And, all of this gets even worse when you realize that people who have only seen New Who would not only see Tennant as their only long-running Doctor, but they would also see Davies as the only showrunner the show's ever had at all. So this was probably the worst possible regeneration to fuck up. And yet, they fucked up.

I feel like a lot of people might've stuck with the show for longer if the Davies/Moffat trade-off wasn't so awkward and jarring. Oh well. >>
Reactions: Gwazi Magnum, Hatsune Candy, Koschei and 1 other person
K

So what did y'all think of this Doctor Who season 9 trailer? :0

My God! It's full of Stars.

Genres
Scifi, some fantasy, Mature. Anything that gets my gears going. Not opposed to Yaoi or Yuri.

I hope the Doctor meets Queen this season. :D

I just want to know what SciFi bs excuse they come up with to bring Missy back after she was FUCKING DISINTEGRATED! The trouble with a show like Doctor Who is that they can come up with literally any ridiculous excuse and it would work.

I would call myself a casual whovian. I really love the show, but I don't buy merchandise or dress up. If I see an episode once, that's usually enough.

I only started watching when the Tennant years started, so he's my favorite because of that bias. Eccleston wasn't until I started watching repeats, so that's why I didn't warm up to him. I was familiar with the show by the time Matt came into the picture. He was a bit childish, yes, but I don't think you can call that a negative attribute. It was wonder; he shoved wonder down our throats and did it in a silly way so we wouldn't gag on it. I originally didn't like when Amy did narration at the start of Matt's time as the Doctor, but when I thought about it I realized it kind of fit her character. Amy takes no nonsense, and she's pretty much the boss of him from time to time.

And also think about it: the Matt Smith years have him going from 909 to over 2,000! That's not childishness. It's onset dementia.

I didn't know if I'd like a grumpy Doctor - which, let's face it, is exactly what Capaldi portrays - but I actually do a lot. Grumpy old man "grr! Alright! I'll save you this time! Just trying to go on vacation..." And it kind of harks back to the first Doctor. Hartnell was a bit grumpy, too, so it's like we've come full circle.

Unknown to me, Doctor Who kept cropping up in my life but it was random episodes that didn't catch my attention. My dad watched a lot of the 3rd and 4th Doctor when I was tiny. Then PBS stopped airing it so I didn't see it again until the mid 2000's. I attempted to watch the episode "42" when it aired on SciFi but again the series didn't catch me. Then a friend about 3 years ago got me hooked. I've been steadily on the Doctor Who train ever since, delving into the Extended Universe when I can. Its all really fascinating stuff. My favorite enemies are the Daleks(I will watch, listen, or read anything that has them). I have a few pieces of merchandise here and there and a 10th Doctor cosplay. No pictures, I'm shy ._.

Currently, I'm forever waiting for Frobisher to pop up in the show.

Quiet One said:
I just want to know what SciFi bs excuse they come up with to bring Missy back after she was FUCKING DISINTEGRATED! The trouble with a show like Doctor Who is that they can come up with literally any ridiculous excuse and it would work.
Click to expand...

Because it's the Master. And you can't kill the Master, no matter what you do to him/her. Because they've tried, many times. There've been a number of instances in which a writer legitimately sought to write off the character forever, only for a later writer to retcon it and bring it back. So, with Moffat behind the reigns the whole time? Yeah, I didn't expect Missy to stay dead, and I don't know anyone who did. It's a given that they're doing to find a way to bring her back.

I mean, the Master was devoured by the TARDIS once, soooo...
G

What's a Doctor Who?

I enjoy the show much. The Ponds and Donna are my favorite companions and River Song is pretty badass. I also like the new doctor. :3