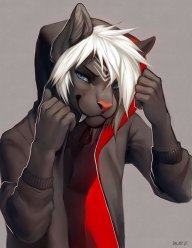 View attachment 91284
Name: Damien X
Age: 19
Hair: Black
Feathers: Black
Eyes: Green
Race: Angel of Death​
Damien is an Angel, or so he thought. He was born with the black wings and the ability to see the truth of people's souls. He flies high above the sky, feeling like his life has hope. He grew up on the streets, orphaned at birth, but he never committed crime, he always followed the rules set by man. His wings were always seen as a mutation, but he saw them only as a gift. He felt free in the skies and he felt peace in his heart.

But in reality, he is something much darker. He is an Angel of Death. One day, while spotting out a drug dealer's hideout, a scythe appeared in his hand, and he knew who he was.

[Looking for a female partner playing a human whose name appears on his 'list' of people to kill, but he can't do it]
Last edited by a moderator: Mar 16, 2016

I'd be willing to RP this with you.

Even if you'd not like me as a partner, i should point out you've posted this request in the wrong place.

Is the way you typed that because English is not your main language?

Omega Black said:
Is the way you typed that because English is not your main language?
Click to expand...

No, I just write a little funny now and again. (and missed the T when writing the word not, that was just me typing faster then i could think)

Oh ok. Yeah, PM me a CS you think would work with this while I try getting a moderator to move this to an appropriate place.
Show hidden low quality content