Dark Shadows over a Harvest Moon

Mineral Town, a once peaceful and happy place years ago has now become a hotbed of debauchery. The farm that was once taken over and thrived became decrepit and abandoned. The Goddess of the Spring deserted the waters and they dried up. Some of the children went missing by the big lake, some say it was the work of the Kappa. The townsfolk began to fight, cheat, lie and supposedly even kill.

The town became virtually abandoned but now a fresh crop of villagers have come to settle in along with their own secrets, plots, and ambitions. Will the town be saved or will the drama of all the new residents put it back further then it had before. And will the murderer of sweet little Popuri ever be found? 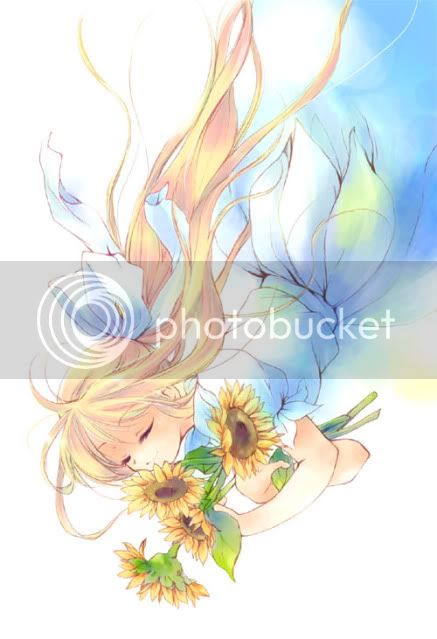 Personality: Sunny and cheerful as a spring day, Annika is rarely sad and likes most everyone. Likes flowers, especially sunflowers. Dislikes mushrooms.
Secret: Annika lives by herself, since she ran away from home.
General History:
Annika was moved around to various cities in her childhood. Her mother and father took homes all over and Annika seldom had any friends. Annika tries to make friends with everyone now to make up for this lack. The final time her parents chose to move, she ran away instead to Mineral Town and used the money she had been saving from helping in her father's flower shop to rent a space and start her bakery.
S

Personality: Quiet and shy at first, but can warm up to someone pretty quicky. Once she does she is very kind and friendly, though she can be odd at some points, depending on the subject and how she feels. At times she can act completely different than her normal self, this is brought on in situations of stress or unease.
Likes: Flowers, sweets, noodles, rice.
Dislikes: Cabbage.
Secret: It's... a secret~.
General History: She showed up in Mineral Town one day out of the blue, not long after the downturn of the town begun. She had enough money with her to take over one of the abandoned shops and soon turned it into her own flower shop, Flora's Flowers. But flowers don't grow in Mineral Town like they used to, so her shop isn't open so often.
O

Personality: Juste is a kind, generous young man that wants the best for his community. He's always working, growing crops and raising livestock in order to help the town become it's former glory. Likes milk, dislikes gems and minerals.
Secret: That...is a secret!
General History: Juste is a city boy. He was born and raised in a metropolis, so he's rather unused to farm life. His father used to be a farmer, however, so he knows something of the trade, though he never really got into it. He came to Mineral Town because he wanted to do something good for the community, and he thought that the place desperately needed fixing up.
P

I'll have something up by tonight.
H

Name: Dexter
Age: 19
Birthday: Winter 13
Job: Bar Owner/Winery Owner
Appearance:
View attachment 1114
Personality: Gruff, tight, and rigid. Shows emotions every now and then. Is rather well traversed and intelligent for a barman, and enjoys chatting with bar goers, hearing their troubles. He is also somewhat familiar with wines, having a small grape vine behind the bar. Is head of the town festivals (except for catering).
Secret: SECRET! DEXTER'S SECRET, DEXTER'S SECRET! BRAAAWK!
General History: Family were nomad hippies, traveling around the world. Died when he was 16. Kept traveling the world, and finally ended up here. Has been in countless countries and has seen much of the world.

Personality: Cold and calculating but unafraid to lighten up off the job. Very inquisitive and constantly trying to glean information from the other residents. He is very passionate about his job and strives to keep the peace, usually having himself posted right outside the bar just in case of fights.
Secret: Is a secret!
History: His parents were kind and noble people who instilled in Drew a sense of justice and compassion for his fellow humans. He grew up to be a cop and worked in the big city. Recently he decided to move out to the countryside to get a breath of fresh air and to get away from the large amounts of crime. Little did he know that the little Mineral Town wasn't as kind and happy as he had heard.
Show hidden low quality content
You must log in or register to reply here.
Share:
Reddit Pinterest Tumblr WhatsApp Email Share Link
Top Bottom