The wind in general seemed to be picking up again, a gentle howl making its presence known past the cheers of the parade below. Sand and confetti were mixed with the dry wind, the several sheets of reflective paper shining brightly as fluttered past them. Ailis pulled her head back onto her neck so that she could hold her weapon with both arms. The air was becoming tense between the three of them, each understanding that the other didn't intend to just let them walk away. There were no words shared for a minute straight, just glances swapped between several pairs of eyes.

"If only you listened." The lamia sighed out suddenly, breaking the silence in one fell swoop. In a burst of motion they slithered backwards to the opposite edge of the roof, revealing a number of flechettes balanced between her knuckles that she quickly fanned out in their direction.

"New plan!" Ailis shouted, suddenly turning and tackling the little architect off the edge of the short building. "Nibbles!"

The little nightmare seemed to know exactly what to do, instantly becoming much larger in size from Jade's shoulder. He expanded into an amorphic mass of shadows, reaching forward as they approached peak velocity. Nibbles had them both swallowed in his form just moments before impact, its dark essence feeling a deadly cold against their skin. On impact nibbles flattened like a lump of clay before bouncing like a ball of rubber and spitting the two of them out onto the alley floor without much fanfare.

Ailis quickly rolled onto her feet, quickly sliding over to the architect. Judging by the way she tucked the arbalest close to her chest suggested a degree of history with stunts such as this. "We can't hurt her." She explained. "There's consequences fer reapers that take a life before they're due. We're gonna race fer our target an' get out before crazy snake lady gets us."
Click to expand...

The star inside of her was inexhaustible, and Jade did not pant as they ran through the streets, but her gait with the halberd was awkward and confetti kept interrupting her words. It seemed to saturate the air, thicker than a storm, and the sculptor could barely see beyond Ailis as they ducked through successive alleyways.

"- is insane! Since when does the universe need so much shepherding?! Now we have to race to your target? Is it always like this? And how does that thing know what you are here to do??"

Her legs twisted around the shaft of the halberd and she doubled over into the ground,

She stood and swung the flat of the weapon back, bringing it down with impossible force like a fan -

"Rrrrrgh!" The burst of pressure sent the confetti and sand upward in a dust imp, a transient column that popped straight upwards and cleared the alleyway ahead for a brief moment. 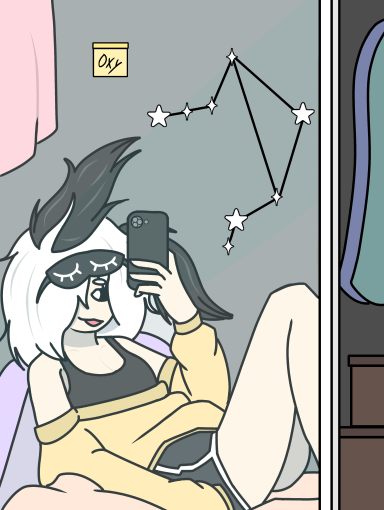 A Pale Reflection of the Sun

Ailis shouted back, as if that would explain anything. Truth be told she wasn't open to as much information about the whims of the universe as she would have liked to be. She was brought into existence to do a job, not ask questions. When Jade fell over she had to stamp her boots down to avoid doing the same, awkwardly skidding to a stop and turning back to see what went wrong. Instead she was met with a blast of wind forceful enough to knock her head off her shoulders, her body diving after her runaway head and catching it by the locks of her hair before it was run over by a parade float.

She cursed the sky, holding her head up to look past the perplexed crowds. She only barely caught the serpentine silhouette moving across the rooftops, a flechette whizzing right past her as she pulled her head back down. With a whistle the blob of darkmatter that was Nibbles slid over to her side.

The nightborne feline took the orders to heart, his silhouette growing into an almost humanoid form. One by one his features were decided, mimicking the thin frame of the architect that he apparently thought highly of. Instead of her face, however, the feline decided it was best to put a shadowy copy of Ailis's helmet on her head to compensate for the scrungy face of a cat that would have been there instead. In the end what was made was a pitch black clone of a helmeted Jade, though that feline tail and ears stayed. With a form chosen Nibbles pitter-pattered away to distract their adversary.

Ailis watched this happen with a surprised expression, lips curled into a concerned grimace before she rattled her head.

She screwed her head back on with one motion before picking up the arbalest she had dropped in her scramble to pick up her head. Her other hand grabbed Jade by her shoulder, continuing to drag her along.

"We already caused a scene, we're just gonna need to take a shot now. Bossman'll give me an earful but I'll deal with that. Jus' gotta get high enough AND close enough tah catch that bastard on his way up to his place. C'mon, we gots tah move. That palanquin will beat us if we don't hurry, an' Nibble's can't take care of that cold blooded hunter forever."

By now the crowd around them was beginning to disperse in all kinds of directions, the commotion they caused having citizens running for fear and had city watchmen rapidly approaching their location. Their pursuer was now the least of their worries.
Reactions: unanun

Jade had worked in the absolute zero of space, had harvested helium from stars, and bored diamond and gold from asteroids. In the chaos of everything that space could throw at her, her refractory skin had always glowed crystalline white, brilliantly marking her among the void of space as she and thousands of other sculptors like her worked to assemble their projects. As she looked at her facsimile, a faint blush spread across her cheeks, and she dramatically cupped her face, twisting the toe of one foot behind the other.

"Is that how I look?" She drawled out each word. "I look so fabul-"

She stumbled forward, watching with despair as her new sister leaped away. "Myself!" she cried, as Ailis dragged her away.

The palanquin drove through the crowd, a cadre of guards driving a wedge through the parade and into an side street. The street was already empty, and guards with bright uniforms dotted the rooftops, as if the route was prepared in advance for a speedy departure. With well practiced intent, a tight formation of honour guards surrounded the bearers in a phalanx as it trotted down the street, which ran straight and all the way back to the palace!

Jade surveyed their outfits in the shade of a spice dealer's tarp.

"I don't think we do-oooooh," her realization was as long as her halberd was tall, as her eyes drifted up the pole to the hammer-head spear point.
Show hidden low quality content
You must log in or register to reply here.
Share:
Reddit Pinterest Tumblr WhatsApp Email Share Link
Top Bottom