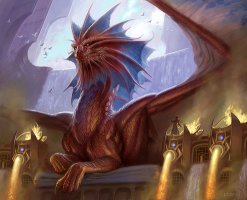 Where am I? What is this place? Why is it full of so many strange smells and opinions?


Well then, lets get on with the show. If the title didn't make it obvious, I would like the help of the various creative minds of the Iwaku community with designing magical items for a D&D campaign I'm running. The Setting is 5th Edition (Insert Pathfinder purist rantings here) and will follow the basic rules of magical items of that world.

I'm looking for all sorts of magical trinkets here: Weapons, rings, armours, and things. I want weapons with cool boons and magical heirlooms and cursed items that turn heroes into goons. I want just about anything and everything you can come up with. The items are all going into a database which will form the chart that the heroes roll on for loot. So I want as many misses as I want hits!

A basic rundown of how Magical items work in 5th Edition. (Or more specifically, how I see them.)

Mundane Items: No Magical effects, any dumb Barbarian can beat with this.

Uncommon Item: +1 effect (Maybe +1 attack, or +1 AC, or if you are really kind, +1 in a stat), Probably no other effect, Any successfully dumb Barbarian might have looted this of a monster's corpse.
Examples: +1 Dagger
+1 Wand of the Warcaster

Rare Item: Will have some sort of magical effect or enchantment on the item, possibly in addition to a +1. The Effect will normally be equivalent in power to a Level 3 or lower spell, normally with a very limiting number of charges. The Barbarian's Wizard friend might have found this, identified it, and given it to the barbarian, in exchange for beer and the promise that he'll smash the wizard's enemies. These items might start demanding players to attune to them, which normally implies a more powerful effect; or a curse.
Examples: Wand of Stunning - Allows you to cast a 'Hold Person' Spell up to Three times a day.
+1 Armour of Salamander Flesh - Leather Armour that gives the user Resistance to Fire Damage, as well as +1 to AC

Very Rare Item: Will have a more powerful magical effect or enchantment, or a number of smaller magical effects, in addition to either a +1, or a +2 bonus. Effects will likely be equivalent of up to level 5 spells, and have a less limitng number of charges. This item might have been one of the big-bad's lieutenant's favourite sword...Y'know, the guy you murdered? These items will more often demand players attune to them, and might feature curses or changes in characteristics.
Examples: Staff of Frost (requires Attunement) - You have resistance to Cold Damage, the staff has 10 charges, which can be used to cast either: Cone of Cold (5 Charges), Fog Cloud (1 Charge), Ice Storm (4 charges), or Wall of Ice (4 charges). At the start of each new day, roll a 1d20; on a 1, the staff dissolves into a puddle of water, otherwise, regain all previously used charges. If the staff has 0 charges, instead roll a 1d4.
Demon Armour (Requires Attunement) - While Wearing this Armour (which acts as Plate) you gain +1 AC, and can speak Abyssal. In addition, your unarmed attacks are treated as +1 Claw attacks (1d8+1 Slashing Damage) CURSE: Once Donned, the Armour cannot be removed. You gain disadvantages on all attacks made against demons, and on all saves against their spells and special abilities.

Legendary Item: Extremely powerful Magical items, with world altering abilities. These items might have a +1, +2, or +3 bonus, and their effects will be very powerful. Spells effects up to level 7 might be at the beck and call of these wonderful items. These are the tools of the Big Bad himself or herself. These items are the pride of a Dragon's hoard, and are the sort of things wars might be fought over, or won by. These items nearly always demand attunement, and may even be sentient.
Examples: Armour of Invulnerability (Requires Attunement) - Plate Armour that gives the user resistance to Nonmagical Weapon damage. Once per day, as an action, you can make yourself immune to Non-magical damage for 10 minutes, or until the armour is removed.
Ring of Betwixing (Requires Attunement) - A beautiful Ring that sets the user's charisma to 19, if it is below 19. As an action, the user can cast Charm Person, and once per day, the user can use an action to cast Dominate Person. CURSE: Once the Ring is put on after attunement, the character's sex changes. This curse can only be removed with a 'Wish' Spell. While wearing the ring, the user becomes obsessed with being adored, and will attempt to enthrall as many people as he or she can.

So, does anyone else have an interesting idea for a magical item? Some of the above examples were made up on the spot, and others still are in the DMG. All ideas are welcome, and all power levels are welcome. KISS it better, or go mad with the arcane power at your fingertips.

Just as a basic skeleton of the magical Items, because I like ordering things in a neat little bundle...

Item Name: Self Explanatory
Item Type: Is it a Ring? An Amulet? Is it a weapon? If so, what kind? Is it armour? If so, what type?
Item Appearance: Self Explanatory
Item Description: The meat of the issue, what does the item do?
Attunement: Yes/No, if Yes, are there any limitations? Does it only attune to a certain Race, or alignment?
Curse: Yes/No, if Yes, what is the curse?

Genres
In no particular order:

And, uh, that's it I think. However, I'm up for almost anything! 'Cept for what I mention below of course.

I'll bite, lemme throw down a few weapons at first.

Item Name: Spider Hunter's Arbalest.
Item Type: Heavy Crossbow.
Item Appearance: Dull and practical like its creators, the Dueagar. It seems to be forged from a single lump of steel, it's short, fat stock and overly wide arms permanently fused together. It bares no decorations or finery, just a solid mass of grey metal. The only feature that separates this weapon from its more mundane cousins are the crude images of spiders scratched into the stock, indicating past kills.
Item Description: Against most enemies the Spider Hunter's Arbalest functions like a normal heavy crossbow, but against spiders and spider-like creatures (such as driders) it gains an effective +2 to attack.
Attunement: No.
Curse: None.

Item Name: Maul of the Mob.
Item Type: Great Club.
Item Appearance: Hewed from a stalactite from an ancient cave and the height of the average dwarf, this great stone club seems unusable. A simple leather wrapping acts as the handle, separating the users hands from the grisly, faces carved all along the length of the rest of the bludgeon. Most times, these faces remain frozen is various exaggerated expressions, but occasionally they groan to life. Usually they do little than argue, judge and spit slurs, most often targeting women and homosexuals. All in an old dwarven dialect. They'll also try to sing along to any songs they can 'hear', often very poorly and with a colouring of curses thrown in.
Item Description: The Maul of the Mob acts as a +2 great club. If the user scores a critical strike roll damage as normal then have have the struck creature make a con save (equal to 8 plus the wielder’s proficiency and strength bonuses). If the victim saves it takes critical damage as normal, if it fails it takes double the critical damage. If something is slain with this strike their head is knocked off and sent flying, the facing cheering and wooping.
Attunement: No.
Curse: No real curse, but the talking faces can cause all sorts of trouble in sensitive situations.

Item Name: Sir Gideon's Sword.
Item Type: Longsword.
Item Appearance: A finely made, but plain, longsword. Sir Gideon Wilkes is inlaid into the cross guard in gold.
Item Description: Sir Gideon's Sword functions as a +1 longsword. When paired with Sir Gideon's Shield or Sir Gideon's Armor it becomes a +2 longsword, when all three items are worn it becomes a +3 longsword.
Attunement: Yes. Will only attune to good characters.
Curse: Yes. User becomes lawful good if they weren't already. In addition they believe themselves to be a human knight named Sir Gideon Wilkes. They will declare their presence loudly and dismiss all attempts at subtlety or stealth as cowardice. The user also grows found of telling stories of their adventures, often greatly exaggerating the whole thing to appear as heroic as possible.
O

Haven't played 5e, just 3.x so these items may not make much sense.

This suit of +2 Plate armor can bend and warp its own metal to intercept what would normally be hits in the armor gaps. This converts critical hits the wearer receives into regular hits. However the armor itself is also cursed, it bends and warps its own metal over the straps when anyone tries to remove the suit, making it near impossible to remove. This can condemn the wearer to eventually die from complications like trapped sweat or urine.

This gemstone gradually absorbs light until it splits into two gemstones. When it does so it releases a bright flash of blinding light, those looking at it within 40ft must save or be blinded*. The second created gemstone is simply a small regular diamond worth around 50gp. Intentionally controlling how much light the fission diamond is exposed to can be exploited to essentially create flash-bangs.

* I have no idea how saves have changed for 5e so this part is left vague.

This is a magic item that consists of two attuned bracers, each bracer is placed on a separate creature. Regardless of distance the two creatures can communicate telepathically though they must be on the same plane of existence. Additionally the bracelets have a greater power to bring the two creatures together instantly regardless of distance or planar boundaries, using this greater ability shatters the bracelets, destroying them.

Can I still help even though I've never played D&D? D:
O

WhisperingWillows said:
Can I still help even though I've never played D&D? D:
Click to expand...

You could certainly come up with ideas, though you wouldn't be able to stat them properly. How much of a problem that is depends on the desires of the OP.
Reactions: Absyinthe

Not stating the ideas is perfectly acceptable.

Also, I sincerely thank @Snakey and @Ottriman. All ideas presented are fun and usable.

Thank you, here is some of mine:

Item Appearance:
This hatchet at first glance seems like it is worthy of a weapon, but on closer inspection; you will notice how dull and lifeless this ax really is. The handle of the weapon is made of oak, but the wood is splintered and worn. The sinew that ties up the blade to the grip is old and falling apart, a few more swings and it could come right off. The blade itself is chipped and has many scratches.

Item Description:
This item has two sole purposes those of which are as follows; cutting down trees and hurting enemies.