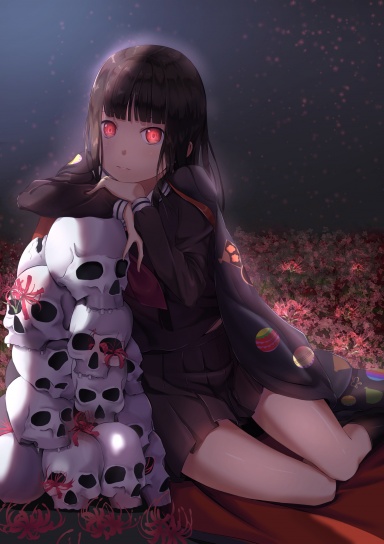 Hello! I want to get three things out of the way first:

1.) I placed this in red-star connection to find mature RPers rather than these RPs being focused on sexual content (But some sexual content might come along).

2.) My outlook on RP is quite fatalistic and I prefer very dark subject matter. Labelling these RPs as "dark" is not superficial - I mean it. This might sound a bit pompous and "edgy" but I am trying to stress this for everyone's sake.

3.) On a lighter note, I am a sucker for RPing close to intimate relationships between females. I have no greater reasoning for this. I just like it.

I do not have many rules, but I have a few preferences.

I do not mind incorporating various fetishes and desires into the plot-lines but it cannot be forced.

I hold no strong moral objections when it comes to RP nor do I hold any powerful desires for particular RP. Be very clear and upfront what you do not want in the RP and what will bother you. I will avoid these things. Furthermore, if I do cross a line in the RP that makes you very uncomfortable then tell me and we will work it out.

Anime/drawn pictures are my preferred theatre of mind. I seldom like to use face claims of real people. A few of my plot ideas have anime overtones which is also something that should be established.

I like to get into the action. I only expect character sheets to get the necessary details across. Other things should be established prior to the RP or established through writing.

I like detailed responses which can be every day, every few hours, or every few days. All I ask is consistency. I will try to get at-least one reply a day if you reply every day.

Basic RP common courtesy (No ghosting without telling, trying to inform partner if you will be gone for a bit, keeping intimate fetish details private, and so on...)

I am more than open to new ideas or propositions. So if you have an idea that you think I will like then shoot me a PM.


A small group of High School girls have become interested in the occult and frequently hang around after school to discuss the supernatural. This is mostly done out of fun and the girls involved feel this is just an "escape" but they will not admit that (a phase if you will). However, a mysterious transfer student becomes involved in their circle. She demonstrates a great understanding of the occult and convinces the girls to participate in a ritual that will grant a wish.

The ritual goes awry and the mysterious transfer student meets a horrible fate. Now the world seems... different? Nothing the girls do seems to work out. Everything begins to fall apart around them. Hell is not a place of fire - it's something closer and more real.

(This roleplay will involve the ritual itself and dealing with the after effects. The essential idea is the ritual causes an inevitable downward spiral in the lives of the girls involved. Much of the RP will involve attempting to reverse the effects while the world around the girls becomes more and more dreary).
Two close friends (or lovers) are part of an investigation team looking at a possibly alien craft recovered from the ocean. It is an empty husk of metal and nothing remarkable is found; however, days later one of the pair begin to display odd behaviors. They have increased appetite and display more aggression. More signs begin to show that they might be infected with something. Authorities soon quarantine the pair once it is determined that some sort of virus was present on the craft. Other members of the investigation team succumb to the illness but this pair do not.

It is not long before they both begin to change. Then they begin to hear the call from some other-worldly source to assimilate mankind. Do they listen to the voice or do they resist?

(This is supposed to be a slow burn with much of the RP focused on the slow transformation and mutation. Eventually it will transition into a second part where the pair are attempting to hold onto their humanity as some other worldly voice beckons for them to use their new-found abilities to begin assimilating mankind.)
A lonely girl with an interest in the occult becomes infatuated with a new girl in town. This new girl is bubbly, light-hearted, and free spirited. The two soon kick off a friendship after the new girl in town passes a psychic aptitude test. Of-course, this is all bogus. The new girl in town claims she is part of a secret underground organization of monster hunters. However, it soon becomes apparent this is not the case, yet the lonely girl does not care. She is complacent in helping this new girl round up the degenerates of society to be consumed by her.

It turns out that this new girl in town is something far worse than one could fathom. She is something otherworldly, terrifying, and if one was to speak her true name they would go insane.

(I really love this one. My idea is the new girl in town is a lovecraftian type horror that revels in having people help in depraved schemes.)
These are my plot idea. I will update the thread if I have anymore ideas.

Looking for at-least two more for:

Hell Actualized and My Dearest.

I am still looking for at-least two more for:

Hell Actualized and My Dearest.