Basic Plot:
The Nexus is a beautiful world. Lush greenery, high mountains, and strong rivers. Created by the goddess Colnaria as her sanctuary. But the native people of Nexus are not human. Colnaria wanted a world away from humans. She created many races of peoples... all covered in fur! Anthropomorphic species that grew and developed their own cultures. In the present date of Nexus, their goddess had not been visible to the world in centuries. The Nexus has grown and flourish despite it. Spreading across the world, forming countries and their own myth and legends.

But Nexus is being invaded. A woman from beyond this world has brought humans in to Nexus. The creatures she wishes to claim as pets while the true prize she is still seeking. ...the very thing that powers the Nexus and keeps it alive.

COLNARIA FLARE - THE GODDESS
Colnaria was a brilliant sorceress. During her apprentice years she was able to develop self sustaining spells. Her greatest achievement was the mythis, an orb of pure magical energy. The Mythis she used to create her own sanctuary. A world filled with her creatures and other creations. Time moved in this world at a different pace than her reality, allowing her Nexus to grow, change, and develop over centuries worth of evolutions. One day Colnaria never came back to her Nexus. Thanks to the power of the Mythis, Nexus continues to sustain itself and prosper. It is the core of the world.

YOA - THE MISTRESS
Yoa is a woman who has studied the work of Colnaria. Being a master Sorceress herself, she too dabbled in creations and world design. Yet, her skill never matched Colnaria's and it showed in the way her spells would be twisted. Yoa has found a way to get to Nexus. She now seeks the Mythis to steal away for her own world, Oasis.

THE NEXUS
Nexus is a flat mass of land essentially "floating" in space. Should you sail to the end of the oceans you will fall clear off the side of the world. It is most lush greenery, forests and jungles. Some plains, a single desert and a mountain range. There are no humans on Nexus. All races of Nexus are anthro or mythical. The anthro races are the natives of the world. Creatures Colnaria created. Races such as Elves, Fae, Dwarves, etc somehow found a way in to the Nexus (or were allowed to make home there) and have since built up their civilizations. Humans that are beginning to appear in the world now are agents of Yoa. The cultures on Nexus have flourished and grown. Learning their own methods of magics and more.


CREATING A CHARACTER!
You can play:
- Any "furry" style race! These are the NATIVES of Nexus and descendants of the original creations.
- Any "mythical" style race. Elves, Fae, Dwarf, wtf. Ancestors of these people somehow migrated or were invited to the Nexus during Colnaria's time.
- A human that works as one of Yoa's agents. These are the ONLY kinds of humans you can play!

How you create these characters are totally up to you. :D You can have whatever powers and skills you like, just keep in mind not to get too crazy, super-powered, and so on. If there is a problem, I'll let you know!

We're going to begin the roleplay where something BIG has happened at a local city, and characters will want to know what's going on or try to deal with it!


THE CHARACTER LIST
Yoa: Sorceress from beyond this world. (Ocha)
Colnaria's Daughter: Accidentally in a time and place she shouldn't be! (Diana!)
O

(And here is a teaser history about Yoa)

"She's from Southern Kalmanck. Where the mountains separate us from the land of Zoan. The Barony of Shalroth was not an important one to the Royal Court, but it controlled most of the south."

"Yoa was the second daughter of Baron Sabaku and Baroness Shalr. Their older daughter was weak. If it was from a birth defect or a childhood illness, the mistress has never said. The Shalroth priest saw in Yoa a great gift for the mystic and called in old friends for her training. She was very young though and rather had played with her sister and cousins. This changed one winter day when Yoa was 7."

"Yoa, will not speak about what happen, she just said her sister died and from that moment on she dedicated herself to her studies. It did not take her long to learn everything the men and women that came to Shalroth had to teach her. By this time the Royal Court had heard of her gifts and sent for her. Once again she learned faster then any mage could teach and became bored."

"Then an old mage from the neighboring kingdom of Narsen came. He brought with him skills never seen in this kingdom before, and for a time Yoa was interested. The mage though had other plans then just teaching. He had been sent by the king of Narsen to weaken the thrown of Kalmanck."

"Yoa learned of his plan, but did not tell anyone. The old mage thought she was being loyal to him, but in fact she had planned to use the mage for her own purpose. When she was 17 years old Yoa realized she had learned everything she would ever learn from the Narsenin. In front of the Royal Court she disclosed his plans for the thrown in detail and then when he tried attacking her, killed him with the magic he taught her."

"From that time forth the Royal Court deferred to her, but she cared not. Instead she started to investigate the world around her from her suite in the palace. There creating many things, including us." The pale figure looked at the others. Their skin was white with a greenish hue, they had large ears and eyes and where hairless. "We are Sabuka's gnomes. Her night guardians."
F 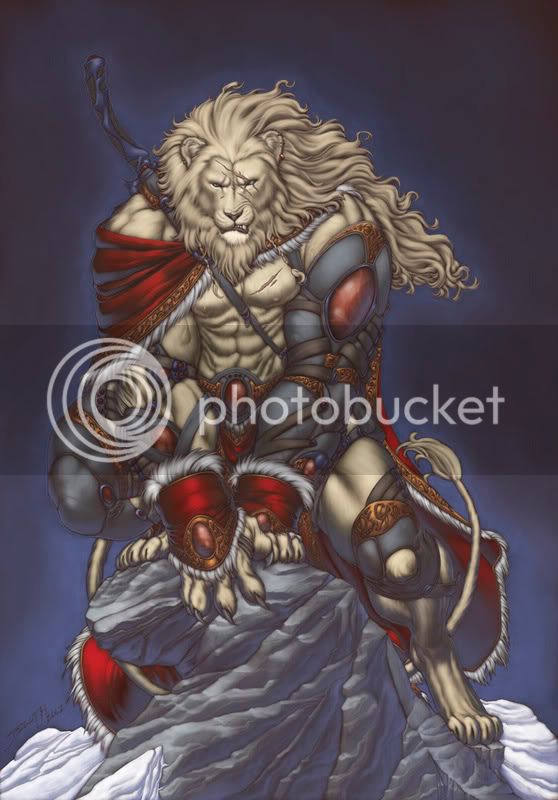 Strengths:
Amazing combat skill, great speed and endurance, highly pain tolerant because of his bulk.
Weaknesses:
He's deaf in one ear, so he can't hear as well as most. He also makes a lot of noise when he runs, making it hard to be unnoticed.
Powers/Skills:
Nothing special. He fights like a beast and intimidates like one.

Current Goal/Purpose:
To find his daughter.
Talents:
Tracking people down with his superb hunting senses.
Inabilities:

Fears:
General Personality:
Inner Personality:
Secret:
His lioness died of illness, so he was a single father raising a female cub. She was taken away from him by thieves he couldn't identify; he's been searching for her ever since. He hopes that while he hunts for the criminals he's hired to pursue, he'll be able to reunite with her. 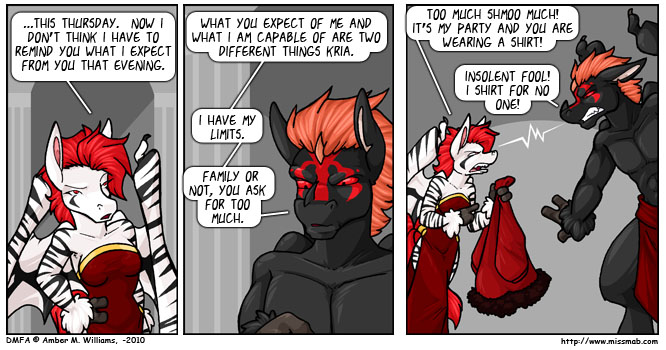 I don't know if I'll be joining yet. The real world has been getting a little too active as of late~ Hope it'll settle down here in a few days and then I can.

General Appearance: Light brown curly hair that falls to the shoulders. Golden brown eyes. Thinner than average figure with a small bust and high cheek bones. Her clothing is the typical 'extravagant' and 'eccentric' attire that's expected of any sorceress. She favors dark purples, navy blues, and silvers.
Strengths: A good strong body and lots of endurance!
Weaknesses: No physical fighting skills what-so-ever.
Powers/Skills: Corona is a young Apprentice, so her knowledge is at the basics. Her magic is only conducted through spoken spells.

Current Goal/Purpose: Save The World, Go Home?
Talents: Memory. Reading People.
Inabilities: She is overly suspicious of everything, which leads her to forcing herself to trust people even when she -should- be suspicious.
Fears: Goblins, Wolves, Prisons, Large Angry Mobs
General Personality: Corona is a little complicated, not from being "deep" but from lacking the knowledge of what to think about herself. Others view Corona as both a hypocrite and a determined apprentice. She spent so much time hating on sorcery, yet once she jumped in, she did so with full intent to do it well. For the most part she gets along with other people, but is prone to moments of reckless behavior, ill-timed outbursts, and the occasional paranoia.
Inner Personality: Corona doesn't know who she is (figuratively speaking). Everyone is supposed to know what they want to be when they grow up, or suddenly discover what they want out of life. There are people who are sure of their own personality. ...and she's just not one of them. She doesn't want to trust people, because she doesn't think she can trust her own instincts or opinions. She doesn't want to ask for help, cause she thinks she needs to be able to accomplish everything herself if she's gonna learn anything.
Secret: She kinda, sorta, has her mother's Spellbook with her. Whoops.

General History: Corona was born to Colnaria Flare some Twenty Years ago. Her father's identity is a total mystery, but that didn't matter much. Their family was small but happy. Living in her mother's shadow did prove to be a problem at first. Corona rebelled against anything and everything having to do with sorcery. Of course, once she grew out of her angsty teen years, Corona realized it was silly to avoid it just because her mother did it. Her apprenticeship began very late and her knowledge and skill severely lacked.

Present Life: Corona has found herself somewhere very weird. One teeny-tiny accident of casting a spell and now she's not in the same world. It's not HER world that's for sure.
V

This open for characters?