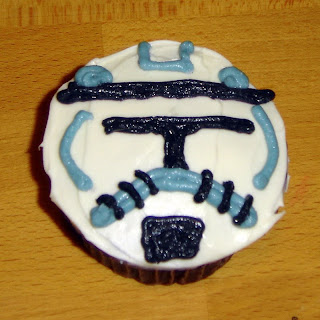 Yes, that is a Clone Trooper cupcake. I seem to have a goal of some kind to incorporate cupcakes with every discussion and poetry thread I make. ANYWAY...

This discussion was brought up in one of my philosophy classes during my 2010 Spring quarter. I just thought it would be a good topic to bring to the boards!

Do you or do you not support human/animal cloning? Tell us why.

If you'd like, make a list of pros and cons. I'll warn everyone of possible debate, so regarding that, I ask that everyone be mature and cool. I'll express my own opinion later on so I don't clutter this post.
F

The only way I'd support cloning is if the clones experiences were cataloged in your brain with you (the original) as the dominant thought process in it's head. Other than that, why the hell would I want me running around when I didn't know where I was?

I know that from a medical perspective, it would be useful. SPARE ORGANS!
D

This thread is useless, where is the colonoscopy?
V

Original poster
There are already enough people running around. For cloning organs for living people, fine. Anything else, no. We don;t want to end up living paranoia do we?
F

Original poster
It wouldn't be living in paranoia if the Clone of Ben Franklin cloned you.
K


Murrstress said:
I know that from a medical perspective, it would be useful. SPARE ORGANS!
Click to expand...


not only spare organs, but cloned animals for food, and/or environmental re-stabilization.
F

Original poster
Yes! Cloning animals for food purposes would be excellent. I believe it would make people feel less guilty for eating them, too. Hopefully they wouldn't start the whole "clones deserve rights, too!" crap. This is the circle of life, we're SUPPOSED to kill things and eat 'em.

Cloning a person? I don't see how that's really necessary. However... Cloning people for military purposes might prove to be useful. Send out the clones so the family members can come home, you know? c__c It would be for the greater good.

Cloning is awesome! Clone everything all the time! Create an Army of clones to fight wars!

Seriously though....I think that it's the biggest medical breakthrough since penicillin.
K

Fluffy said:
Cloning a person? I don't see how that's really necessary. However... Cloning people for military purposes might prove to be useful. Send out the clones so the family members can come home, you know? c__c It would be for the greater good.
Click to expand...


I half agree with that, if we start cloning people to make them soldiers then yes it lets families be together, then the clones will start to be molded to be "Perfect" Soldiers...and you've watched enough movies to see how that would be bad.
G

Original poster
I had a conversation about this with a religious friend a while back. I think a clone is ultimately just another human being. Under most government basic laws, they would have to be treated that way. I think the only thing that would happen is most people who needed another lung or kidney would grow a clone for that purpose. But they wouldn't let you rip the heart or whatever out of it.

I also had this conversation with a religious friend in high school; he was a Satanist (Not that fake ass LeVeyan shit, yo.).

“It’s a terrible idea! They can’t just play God like that,” he insisted.

“I thought you didn’t believe in God,” I replied, all awkward teenager like.

“Of course I believe in God! And I hate him!”

Personally, I’m against animal cloning-because I like animals, so I’m a vegetarian.

But sometimes I miss eating meat. :\

So I’m all for human cloning, because then we could just farm the human clones for food and leave all the poor, endangered animals alone.