You were in an accident.

When you awoke, the world was different.

This new world is warped. Repulsive. Rotten. Filled with grotesque monsters. Everything is filthy and disgusting. You and your fellow survivors, tied by a shared fate, are the only things that seem to remain the same. 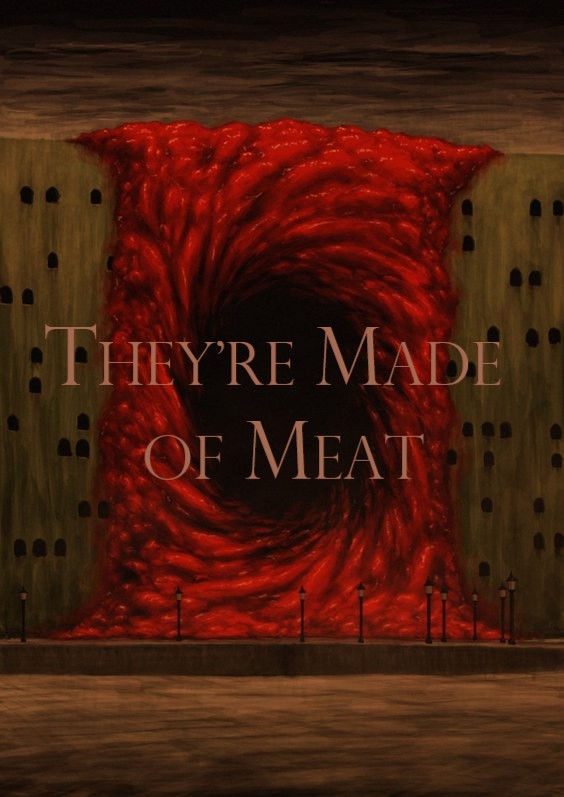 They're Made of Meat is a horror chat roleplay inspired by Silent Hill, The Song of Saya, and Lost. You will play as the survivor of a subway accident who awoke to find themselves in a strange, skewed version of reality where possibly nothing is quite as it seems. The people who were in your subway car are here with you, and the game will pick up immediately after the incident.

What caused the crash? Was your car the only one spared? What is this terrible place? Will you ever get back to the normal world?

How will you survive?

Who can you trust?

EVENT INFO
WHO: Anyone can join. You do not have to be an experienced RPer and you do not need to have prior knowledge of the media that this plot is LOOSELY inspired by. Bios are appreciated but not required.

Please be warned that this RP is very definitely going to contain gore and psychological horror.

You must play a survivor of the subway crash and be from a modern and real-world setting. You may not play supernatural characters for this ChaRP, sorry!

WHAT: A horror/mystery/psychological ChaRP set in a gross nightmare world.

That means I will be attempting to SPOOP YOU and will be driving action for you and other characters to react to. Lolrandom RPing is discouraged because I will be giving in-game consequences for decisions your character makes. Please let me know if you are not okay with character death so I don't kill your character!

WHEN: FRIDAY March 26th from 6 PM to 9 PM US Central (7 to 10 PM Eastern). You can use this time zone converter to translate that to your time zone!


DO:
- Interact with your fellow players/their characters! Waiting for someone to approach your character first might mean you get left out. Some people also like to plan ahead of time to make shared backstories, though that's not at all necessary.
- Show up to the OOC chat about 10 minutes in advance.
- Make short, fast posts. Aim for a few short sentences. Longer posts means people will either be stuck waiting on you to reply or will leave you behind because you took too long. We only have a few hours and it goes faster than you think.
- Make sure you mention your character's name in your post so we can keep track of who is playing who.
- Speak up if something is upsetting you or isn't okay with you.

DON'T:
- Take things personally. Sometimes posts get missed by mistake; sometimes characters don't get along. In-character behavior does not mean someone dislikes you!
- Derail other people's posts. If someone tries to do something and you think it'd be really badass or funny for your character to stop them right away, you might be ruining their fun in the process!
- Get discouraged. If you haven't gotten to do anything yet, just keep posting. If you don't know what to do next, ask for help! Other players and I can give tips or I can switch up what I'm doing to make things easier for you.
- Expect NOTHING bad to happen to your character. Especially since this is a horror game!
Reactions: Absinthe and Turtle of Doom

>.> I'm here for this.
Reactions: Astaroth

A game at night where I can get home and play. And horror. And it's Astraoth as a GM. Sign me up.

(Faceclaim: Tyssen Smith)
Name: William Robert Banks
Nicknames: Will
Age:27
Appearance: Will has brunette hair that he has styled and pushed back with way too much hair product in it. Despite being old enough to grow facial hair, he is entirely clean shaven. He has blue eyes. He tends to wear a white t-shirt and a black leather jacket along with jeans. He has a lanky build and very little muscle definition. He also stands at a even six feet tall and wears sneakers on his feet.
Personality: Despite dressing like a bad boy and have a name that would imply that he's a felon, Will is an incredibly law-abiding citizen who would fall as Lawful good on an aliment chart. He works entirely on laws and things being order. as a mask to hide his true emotions.... but seeing as chaos reigns supreme since the incident, he has become unhinged, frazzled and doing whatever it takes to survive and has a hard trusting people.
Other: Will has high functioning ASD ( Autism Spectrum), anxiety, depression and ADHD ( Combined type)
Extra: Please don't kill Will, he 's a sweet broken man.​
Reactions: Zarko Straadi

I will be playing Molly. She was once married and had a kid, but her son died in a tragic playground accident. Her husband didn't verbally blame her for their son's death, but it was clear that's why they divorced. It's been six years. Molly works in the subway at a help desk, usually helping the elderly using the ticket kiosks. (Unfortunately at the opposite end of the city from where she actually lives.)

Molly doesn't have a lot going for her right now. She's friendly, likes a good hot dog, is wrought with guilt, doodles and draws in her spare time, sometimes thinks about jumping in front of the train, and her favorite movie is Captain America, because who wouldn't love America's Ass.
Reactions: Zarko Straadi

This is still happening but I am gonna be slightly burnt out because our power was out from 11AM-4PM today
Reactions: Zarko Straadi

Sabra grew up in a violent, male-dominated household. Her father and brother were petty criminals, and her childhood was spent in a world of street gangs and corrupt cops.
She was determined to find a way to a better life. In school, she found out she had a knack for computers, and started teaching herself how to code and hack.

When he caught her using her talent, her father dragooned her into applying it to the "family business." But at least this allowed her to keep learning, and scheme for the day she could break free. After a "big score gone bad," Sabra ended up in the foster care system, going from one home to the next.

After high school, she was able to get a job as a junior coder at Terminus Technologies, a software conglomerate with divisions in A.I., machine-learning, data mining, robotics, social media, surveillance, and neuroscience. She started to climb the ranks, and for awhile, life was good. She had money, a Tesla Model S, and a job where she could push the cutting edge of technology.

But she had a nagging feeling that something wasn't right at Terminus. She started poking her nose in places where it wasn't supposed to be, until she discovered Project SELDON. SELDON was a hybrid neural-network and quantum supercomputer designed to model the human mind and social behavior patterns. Fed with streams of data from a wide range of sources ranging from experimental brain implants to natural-language

But that was not all. Its true purpose was to steer the development of humanity toward a technocratic super-state governed by a future transhuman elite (to be drawn from the upper echelons of Terminus, naturally). Sabra knew better than to think she could do something like get the proof and take it to the press or reveal it on the internet. SELDON was already capable of determining which stories would trend and which ones would go unnoticed.

So she decided to try to monkeywrench the system from within instead, and...well, why not chisel off a slice of the pie for herself while she was at it? Might be good to be able to live well in some non-extradition jurisdiction by the time the fallout hit. What she didn't know was that Terminus used its profiling software first and foremost on its own employees. They were a nearly-perfect pool of captive humans for testing predictive sociology and memetic manipulation on, and they couldn't have been more handy.

Instead of bringing the giant down, Sabra lost everything and found herself on the run, living off-grid, and struggling to stay one step ahead of the cops, the alphabet agencies, and Terminius company goons.

Skills: Computer science (coding, hacking), street-fighting, parkour, disguise, lock-picking, security systems
Strengths: Ingenuity, resilience, physical toughness, and atheticism.
Weaknesses: Exudes an aloof, unapproachable aura that tends to repel people. Sabra is almost completely incapable of asking others for help, or having any hope that they might if she did. Overconfidence, and a tendency to take big risks.

I will be playing Rae, a new agey, crystal waving Wiccan. She's the daughter of a socialite much to her dismay, and is everything her mother hates. She has stubbornly refused her mothers assistance in all things since she reached adulthood and has been a "struggling artist" ever since.
Reactions: Zarko Straadi

Name: Maximillian Iourdanou III
Age: 29
Personality: Do you know those rich asshole children who never worked a day in their life, hold themselves in high regard and brag about their wealth? Yeah, that's Max. He has no patience, no chill and absoultely zero qualms for the messy things called emotions.
Extra: He may die. He hates being called Max ( Please everybody call him Max)

I know I said we could finish this tonight and this is already a reschedule, but I'm gonna be that asshole who cancels last minute for personal reasons. Sorry guys. If anyone is willing to give me another shot, I might schedule a redo in the future, but not until I'm sure I won't have to cancel on y'all again. It was fun anyway and thanks for playing!
Reactions: Zarko Straadi

I'm fine with you rescheduling again. I think this is an exciting story, and I would love to see it continued/completed. I forgot the next installment was supposed to be tonight anyway, lol. If you should decide/realize that you can't/don't have the spoons/don't want to continue this, would you object to someone else pinch-hitting as GM (say, Diana if she wants to, or me) for a continuation?
Show hidden low quality content
You must log in or register to reply here.
Share:
Reddit Pinterest Tumblr WhatsApp Email Link
Top Bottom