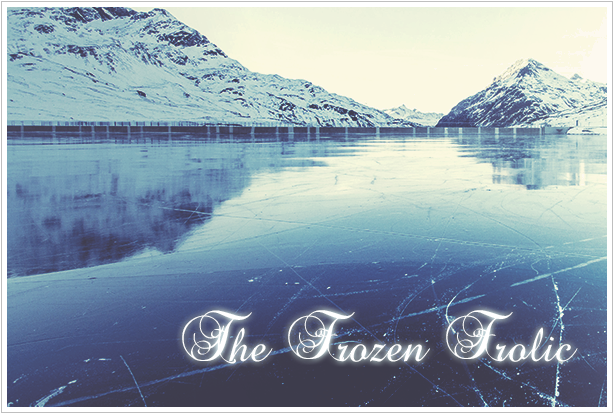 THE FROZEN FROLIC
DECEMBER 8TH WEDNESDAY @ 12PM TO 3PM CENTRAL TIME​
In the quaint little village of Snowdrop Hollow they have beautiful and wholesome traditions. A local favorite is calleed The Frozen Frolic - a day celebrating that moment when the lake has frozen solid enough that the villagers can then go ice skating safely. It's become a whole day-long jubilee, filled with joyous music, fun games, delicious hot drinks and an evening feast.

As you make merry in Snowdrop Hollow, take a moment to enjoy the Dance of the Caribou or join in on Bachelor Chase. (There are a lot of unmarried and eligible bachelors this year!) You might even get a kick out of the storytelling from the Old Geezer.

WHAT: This is a traditional fantasy roleplay! There's magic and creatures and everything you would expect in a fantasy.

WHERE: Join us in the FROZEN FROLIC chat room. You'll find the link to our chats in the CHAT tab when it's time to play.

HOW: This is a SOCIAL SETTING WITH IMPROVISATIONAL GAME MASTERING. That means the object of this roleplay is to interact with other characters, and from those interactions I will create a plot and story around you. Most of this roleplay will be socializing, with a splash of a problem and your characters will have to work together to resolve it. With this ChaRP "lol random" behaviors are discouraged -- what your character says and does will have in game consequences, so choose wisely!

Do not take events in the roleplay personally or assume that bad reactions are because they think you/your character sucks. Everyone is playing a character and reacting to things as their character would!
Reactions: Zarko Straadi

After a year of hard travel and scraping by, she found her way to the village of Snowdrop Hollow, in time for another holiday festival she hopes will leave her in better straits than the last one...