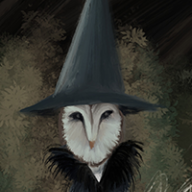 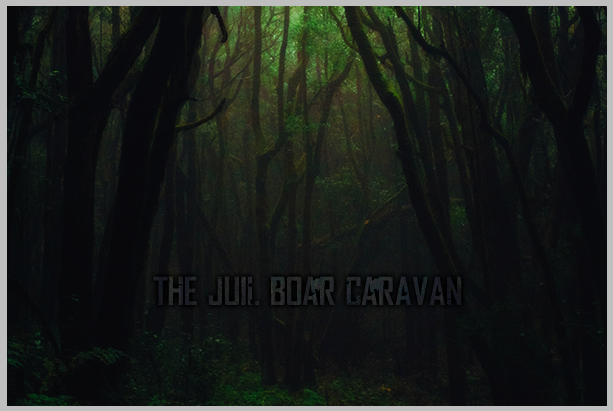 THE JUIL BOAR CARAVAN
JANUARY FRIDAY THE 28TH @ 2PM TO 5PM CENTRAL TIME​
Imanuil is a land that has been torn asunder by a terrible techomancy war. Once a single grand united empire of countries, the majority of the center half of the continent has become a massive fallout zone. Weapons of science and magic have created dangerous creatures and strange anomalies that've made these former countries uninhabitable for over a hundred years. Most who wish to travel go the long way around, either by sticking outside of the borders or sailing around the continent via the sea as even trying to fly over the Zone can be perilous.

For many, they simply can't afford that lengthy of a journey, or have reasons why they need to avoid traditional roads. These people enlist the help of Caravans to safely guide them through the fallout zone. Going through alone could mean almost certain death, so traveling in a group comes with advantages. But if you're not careful about who you hire, you might end up robbed and left for dead in the Zone.

You are a traveler and you've paid your fee to join the Juil Boar Caravan. They seem to have a good reputation, despite the fact they looked like a bunch of mercenaries. You are two days into your trip and there's still another week to traverse, so be prepared to spend many more evenings in your wagon, vehicle, or on the ground under the stars. Hopefully you brought food, because hunting and straying too far from the caravan is not recommended. Remember: The Juil Boars are paid to protect the caravan and guide them through the Zone, not chase after missing idiots!

WHAT: You can be a trader, a refugee, anything you can dream up! For some reason, risking your life was worth it over taking the longer route to where ever you're headed. This setting is SCIENCE FANTASY. Think a heavy fantasy world with a focus on magic and nature, that also developed and evolved technology. Like a planet you might see on Star Wars but without aliens of space travel, or even the aesthetic in the recent SHE-RA series! And yes! You can play magical creature races like elves or goblins or anything in between!

WHERE: Join us in the JUIL BOARD CARAVAN CHAT ROOM. You'll find the link to our chats in the CHAT tab when it's time to play.

HOW: This is a ADVENTURE ROLEPLAY WITH IMPROVISATIONAL GAME MASTERING. That means the object of this roleplay is to interact with other characters, and from those interactions I will create a plot and story around you. There will be action moments, where your characters may be in danger and will have to try to survive. With this ChaRP "lol random" behaviors are discouraged -- what your character says and does will have in game consequences, so choose wisely! 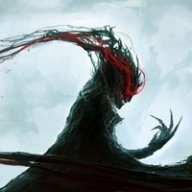 Bio:
Clary was born into the Starchaser Combine, a semi-nomadic culture of free spirits who get by as salvagers, adventurers, card sharps, traveling performers, smugglers, and other dubious professions best practiced by those who don't stay in one place for too long. When she was 16, the time came for her Quest, a coming-of-age rite in which a group of initiates goes into the Zone to find and retrieve something of value to contribute to the Combine.

Clary's group found a worthy prize indeed, a hoverskiff in nearly perfect condition. Clary was the best mechanic, so she set to work trying to get the vehicle working so they could make their escape back to safety. She was nearly finished, when she heard screams and weapon discharges coming from her compatriots. By the time she was able to crawl out of the engine compartment, sixgun at the ready, the others were already brutally maimed and beyond saving. Standing over their dying bodies was an eldrich fiend with several shriveled heads that floated over its body, attached by heavy iron chains: the Barrowman. Clary emptied her gun to no effect. The Barrowman taunted her. "Pity. If only you had worked a little faster, I might not have reached you in time. You will not die with these others. When the time is right, your head will float with these..." it said, before dissolving into a tangle of oily smoke.

Clary was able to finish repairs on the skiff and return from the Zone, but she could not bring herself to claim her membership in the Combine. Since then, she's taken dangerous transport jobs, smuggling runs, heists and various capers against people who deserve misfortune, on behalf of those who don't.

The hoverskiff uses superconducting electromagnets to ionize air underneath the vehicle and swirl it into toroidal vortices that generate ground-effect lift like a hovercraft, but without the limitations of a hovercraft's physical skirts. The Golden Fox can also fly, but that uses up the energy of its fuel cells much faster than its standard mode of travel.


Extra: Clary will accept passengers and cargo in need of a fast skiff to get through the Zone.