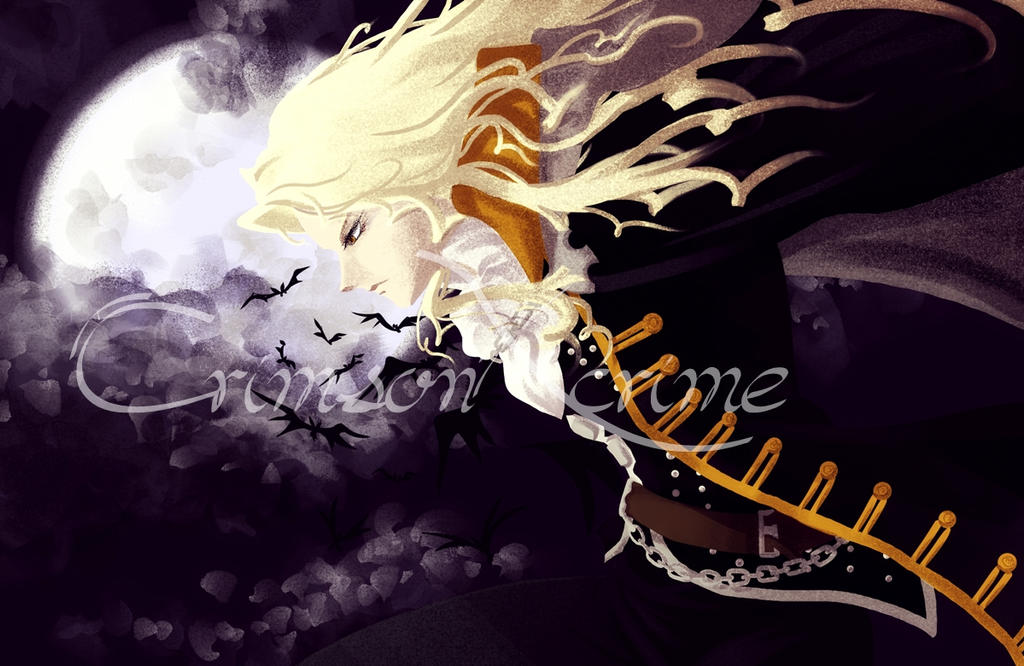 Powers/Abilities: Dark Magic: Although Alucard can more than hold his own physically, it is magically where he is truly dangerous. Like his father, Alucard can use many types of dark magic, it can be said that his powers is at least ½ of what Dracula's is, since Dracula trained him personally. Alucard mastered most of Dracula's own attacks, such as Hellfire, Dark Metamorphosis, Tetra Spirit and Soul Steal.
Shapeshifting: Alucard can shapeshift into a wolf, bat or mist to get to certain areas. He is also invulnerable for a short frame in the middle of the transformation process. With the aid of some relics, Alucard can enhance his shapeshifting; his Wolf form can run faster than a bullet, his Form of Mist can become a Poison Cloud, and his Bat form can fire fireballs and also a destructive sonar. It is speculated that Alucard, like Dracula, has a "final form" that he can transform into, but he refuses to use it as he does not want to be like Dracula in any way; this is supported by the fact that at random, Alucard will turn into a massive gargoyle statue when petrified, which is impervious to damage; this may be his "final form". However, if this is true, there is no reliable way to use the form in-game.
Speed: He can run faster than a bullet both in his human and wolf form.
Summoning: Alucard can summon many creatures via Relic Cards, such as an assisting fairy, an elemental spear-wielding demon, a fireball-shooting bat, a soul-stealing ghost or a powerful sword.
Swordsman skills: Alucard mastered a variety of weapons, but none as he mastered his mother's sword. Seeing as the sword is a family heirloom, Lisa could have come from a lineage of sword masters or knights. He also inherited the Alucard Shield which improves defense against all attacks, the Alucard Mail which improves Fire, Ice and Thunder elemental defense, and the Dragon Helm which scares enemies and lowers their defenses. With the Twilight Cloak, inherited from his father, Alucard increases defense and reduces flinching.

History/Biography/Summary of the Character:
In 1476 when Trevor C. Belmont was on his own quest to hunt out the Count Dracula, who had controlled his son to become evil, Alucard would be waiting for Trevor Belmont to come by. Alucard acted like a boss (not a real boss) at this point, testing the skills of the hero. Alucard was surprised by Trevor's strength when he was defeated and asked if he could join Trevor on his quest.
After helping to destroy Dracula, and despite his good intentions, Alucard couldn't help but feel guilty for patricide. To ease his pain, he put himself to rest, submerging his powers.

In 1797, due to an unexpected lack of a Belmont, Alucard had no choice but to awaken from his slumber to investigate the matter and infiltrate Castlevania. He was able to find out that Richter Belmont had been seduced by evil and was controlling the castle.
With the help of Richter's sister-in-law, Maria Renard, they were able to find out the truth: the dark priest Shaft was controlling Richter and wanted to raise Dracula from his dark slumber. After releasing Richter from Shaft's control, Alucard entered an upside-down version of Castlevania, with more powerful enemies, and confronted Shaft.
Having defeated Shaft, Alucard discovered that his efforts were in vain, as Shaft's plan had come to fruition regardless. He solely defeated his father in combat once more, and sent him back to the grave, though Dracula did show a spark of humanity after Alucard told him Lisa's last words: that mankind should be left in peace, and that she would always love him. He then planned to put himself back at rest but Maria, who had developed a strong attraction to him, eventually set out to convince him to stay. 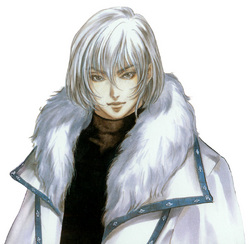 
Abilities
Power of Dominance: An unexpected sequence of events in Dracula's Castle caused Soma's dormant powers to be awaken with Dracula's primary ability, the power to rule over defeated monsters and demon's souls and to project them in a variety of forms according to their potential. These souls, from lowest to greatest will obey Soma and will support, protect and even fight alongside Soma to defeat his enemies. Though Soma dislikes and even fears this power, he will have to rely on it to brave the aberrations of Dracula's castle and live to tell about it. These souls can be projected in four different forms portrayed by their color (some souls in Dawn of Sorrow may come in different soul types from when they were encountered in Aria of Sorrow which could be argued is an effect of changing situations and having to find new ways to use those same souls).


Red Bullet Souls: The offensive souls of the group, the Red Bullet souls are based on all out physical damage, elemental damage, status changing and sometimes a combination of most to crush enemy defenses. Bullet Souls essentially serve as Soma's version of the common "Sub-weapon" in the Castlevania series. These souls range from shooting rings of water, to lobbing grenades, to tossing out une seeds that grow into Unes.

Blue Guardian Souls: The protective souls of the group, the Blue Guardian soul can enhance Soma's statistic potential, guards Soma from additional damage, transform Soma into them, or even fight alongside Soma for additional damage, at the cost of Mana. The Devil guardian soul, for example, causes all of Soma's stats to greatly rise, but it drains his health as long as it's active.

Yellow Enchanted Souls: The supportive souls of the group, the Yellow Enchanted souls boosts Soma's status with no additional cost of Mana, though they may not boost Soma's status much, sometimes the help they give may be more than enough to decide between victory or failure in a fight. Some enchanted souls, such as the zombie soul in Aria of Sorrow, causes Soma to become far more powerful when he is afflicted by poison. A similar soul in Dawn of Sorrow, the Ghoul Soul, allows for Soma to eat spoiled or rotten foods, all of which would normally cause him to fall grievously ill, and restore his hp with it.

Silver Ability Souls: The movement souls of the group, the Silver movement soul allows Soma to enhance his movement, such as a high jump, a double jump, underwater travel and breaking certain blocks.

Soul Combo: Some Bullet and Guardian souls resonate with one another and they can allow Soma to cast Bullet Souls for free when the Guardian Soul is activated.

Arms Mastery: Soma, though at 19, has mastered a variety of arms such as basic swords, spears, axe, melee punches and hammers as well as the first one to wield firearms ranging from handguns to heavy weapons. Some of the weapons can be upgraded to have divine properties.

Arms Critical Attack: Soma can project his Mana through his weapon and gives the weapons special property of damage, such as speed, strength, length or distance and in some cases even releasing a weapons hidden powers such as the Gungner's ability to shoot a powerful lightning bolt in a similar fashion to the Item Crush ability that Vampire hunters are capable of using with their sub-weapons.
Magic Seals: Soma mastered Magic Seals, used to counter demons that regenerate their lives through the Portal of Darkness. The Gates of Darkness cannot function without the seals, like a cover to a hole. However, complicated seals can be created to ensure the caster have difficult time sealing the Gate within the given time. Soma has mastered up to level five seals within the time he invaded Celia's castle. In an alternate ending it is shown that magic seals can also be used as a form of binding spell which allowed Soma to seal Dario's Dark lord powers.


History/Biography/Summary of the Character
Soma was studying in Japan in the year 2035, the year where the first solar eclipse of the twenty-first century was to occur, and he and Mina were on their way to see the astral event when fate stepped in: the two are transported into Dracula's castle itself. Immediately protective of Mina, Soma sets out into the castle to find an exit and save themselves from its demonic influence.

Soma encounters various other individuals were drawn into the castle, and from them learns Dracula is indeed dead, but his castle seeks a new master. During the battle against the castle’s monsters he demonstrates an ability that he was not aware of possessing previously: the Power of Dominance, the ability to steal the souls of life forms and bend them to his will in various shapes and effects. This supernatural trait is a derivation of Dracula's primary power, the ability to command monsters.
Soma soon encounters a deranged missionary named Graham Jones who believes himself to be the incarnation of Dracula, because of his birth at the very moment Dracula was ultimately slain in the battle of 1999. But Soma, in demonstrating the power to rule over souls, becomes Graham’s target, and the two engage in a battle which Soma eventually wins - but in doing so, he absorbs a startling amount of the castle’s dark power and comes to realize a shocking revelation: his powers and Dracula's soul are one and the same - Soma is the next incarnation of Dracula himself, and therefore may inherit Castlevania as its new lord and master. Soma then heeds the advice of Genya Arikado and travels to a chaotic realm where he must confront the core of Chaos, the source of Dracula’s dark power. As he hopes to escape from his bonds with the castle. Soma receives encouraging words telepathically from Mina and his other friends which he had encountered over the course of his adventure in the castle, and is therefore able to defeat Chaos, retain his identity, resist Dracula's inheritance, and escape with everyone from Castlevania as it is drawn back into the eclipse. In conquering this personal challenge, Soma becomes more open and trusting to those around him, though his mysterious powers still reside within.
​

I'll make a character at some point, but there are no canon characters in the series besides Zobek that I have an interest in playing, except he's kind of a villain.

Will make a cs when I get to a computer

Crud... I don't know any of these characters...

Hah same problem here. I don't know a lot of them and those I do know I want to beat the shit out of. Preferably with magical vampiric powers.

I want to make an oc but I can't... not until there are enough canon characters taken. I'm a stickler for the rules.