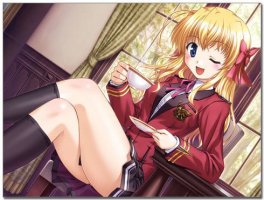 Recently took some time off but trying to get back into the swing of things. A little about myself first I suppose. I'm 20, Female and live on the East coast (in case time zones matter to you.) In some cases I'd be open to playing male but I have a strong preference for female roles. I'm fine with both consensual and non consensual themes so whatever floats your boat is fine with me. Aside from that there isn't much to add... I don't have a whole ton of limits but for those who like to see them I have them provided. If you see something that's not on the list then just feel free to ask.

As far as post go, I don't have a strong preference. Anything between one-three paragraphs will be more than enough. I usually try to aim for at least 3-5 lines if not more. As long as the plot is able to move along after your post then we'll be fine. I also prefer submissive roles when possible but might be up for a dominant role if the mood strikes me.

As far as characters are concerned I don't have too much premade. I'm completely open to suggestions or playing characters from pictures that you provide. Additionally, I have a small gallery of pictures that you can scan through and pic a character out that you like. I also don't mind playing antho/Furry characters or having yourself play them.

Now that that's all out of the way, lets get down to some possible pairings. The side that I prefer to play will be provided on the right and the pairing I'd prefer you to play will be on the left.
Pairings

I'd also like to do themes concerning futanari, showering, sleep invasion, name calling and forms of abuse/ punishment. For those interest in Anthro characters, I would also like to include knotting.

Feel free to come up with your own ideas too. I love to hear what you all have to offer. Just try to keep my interest in mind. <3

That's all for now but I'll try and add more as I think of it. Chow~
S

I was wondering if you were still looking for partners?
Show hidden low quality content