A new era has begun on the world of Zethrex, known as the Magic-Industrial era. Magic has always been a part of life, but the Circle of Magi in the kingdom of Qortic was the first to discover new uses for it besides combat and conjuration. Now, magic is being woven into almost everything in society. New inventions previously unheard of are being created with these new discoveries. Factories powered by magical energy are being built. Technology and magic are breeding new innovations, and improving the quality of life for all.


After these new discoveries, the Circle of Magi were heralded as heroes to the kingdom, and were even praised by other nations of the world as their discoveries were spread around the world. The Magi soon became drunk with their fame, and sought to garner more fame and power still. Soon, they used their intellect in the ways of magic and technology to create something that no one thought possible, the legendary Fountain of Youth. They presented it to the elderly King and Queen of Qortic, who were quick to congratulate them on yet another stunning accomplishment, and used it to stop the effect of aging. Word was quickly spread of this feat, and praise yet again was showered unto the Magi. They continued their research, trying to find the next great thing.

But it was soon discovered that the Magi had much bigger plans...
Several years past by, and much of the world was well on its way into the Magic-Industrial Revolution. Soon the time again came for the King and Queen to revitalize themselves with the waters of the Fountain, but when they sought to use it once again, they discovered that it had run dry. This was the day that the Circle of Magi made their move, and easily overtook the throne. Their thirst for fame and power had driven the Magi to deceive everyone, and take control of Qortic for themselves.

The Magi had developed an army of mechanical soldiers to do their bidding. Within weeks, the Qortic military had surrendered to the Magi, and they were declared rulers. But they weren't going to stop there. The Magi sought even greater power, turning their sights to the horizon. What started as a civil war was about to become a world war. They would not stop until they had all of Zethrex under their control.

But even this was not the extent of their plan...
In fact, it was only the beginning. The Magi believe they have found the means to make themselves into gods. To go beyond the limitations of technology and create life from nothing. To create worlds even. And that is their true ultimate goal.

War is coming... Who, or what, will you fight for?

(This will be even further expanded once enough initial interest has been gathered.)

If enough people are interested, I'll put up another post for some more background information and a profile template. I don't want to go ahead and have people make one and be disappointed when there isn't enough people. This roleplay is still in the 'rough draft' phase.

Still working on the details of this one, which i will be GMing. Hope some people show some interest. Will be editing some of the info soon.
K

Yeah I know, evil. But I have plans for him.
K

If you guys have any friends you think might be interested, please, drag them in here. The more people we have the bigger we can make this. Even more Details coming soon, and possibly an OOC/Signup thread.

Also, keep in mind that "Becoming God" will NOT be the final official name for the RP. That has yet to be decided, but we'll post it up as soon as we come to an agreement on it. Also i invite anyone who thinks they have any good ideas to add to this RP to speak up. We want this to be as big as we can make it, and any input from you guys would be welcome, and all will be taken into consideration.
L

Sure, I'll take a crack at it. Sounds interesting~
K

Expect another chunk of info within the next 24 hours.
K

Ok, time for another big chunk of info on this RP, as promised. For those of you who are wondering what exactly "Magic-Industrial" means, it's more or less like a mix of steampunk with magic thrown in, and maybe a bit of sci-fi. As far as technology goes, if you're familiar with steampunk then you probly know that steampunk is basicly the idea of what might happen if fossil fuels were never discovered/invented and if steam progressed to fill all of the same roles, and more. This has the same style, only it uses magic, or "Mana" as the fuel source for everything. Virtually anything you could imagine working like that can and probly will be used in this RP.

Now with that out of the way, i'd like to give some further insight into the 3 factions. Yes, 3 factions, not 2. There is a 3rd faction that wasn't mentioned in the original post, mainly because it takes sides with neither of the main 2. But more on that further down this post.

First up, we have the infamous Circle of Magi. 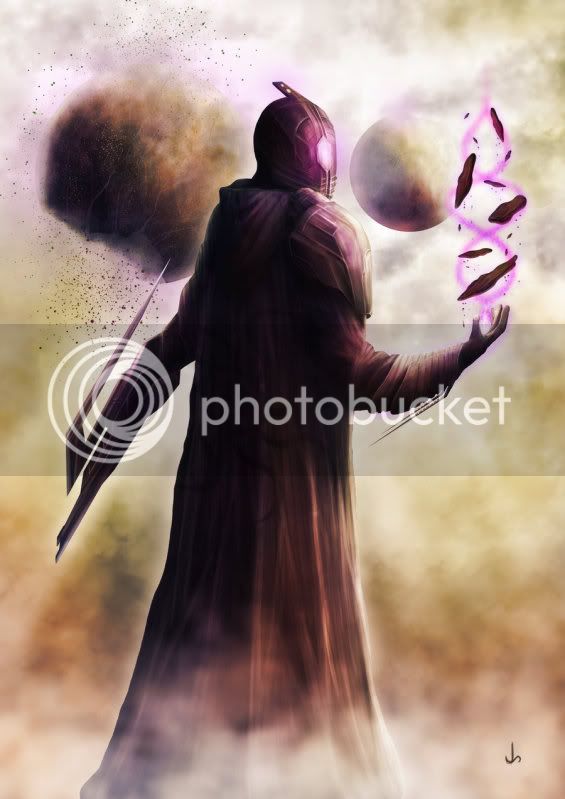 This is the leader of the Magi, Archmage Taiberius Kamen. As you can see, the Magi may specialize in the use of magic, but their technical knowledge is also extensive. Taiberius is by far the most powerful of the Magi, and also one of the oldest members, age 68. Don't let his age fool you though. He may be old, but his power in magic is beyond perhaps anyone else in the world. He is the prime candidate among the Magi to become a god.

The Magi themselves have become a very ruthless group, and have recently become fully militarized after overthrowing their King and Queen, and weeding out the "fools" that refused to swear allegiance to them. They created a small army of automatons that aided them in the process, but have since recruited most of the Qortic military to help further their cause. The automatons are still used in the war effort, but are typically used as elite guards. 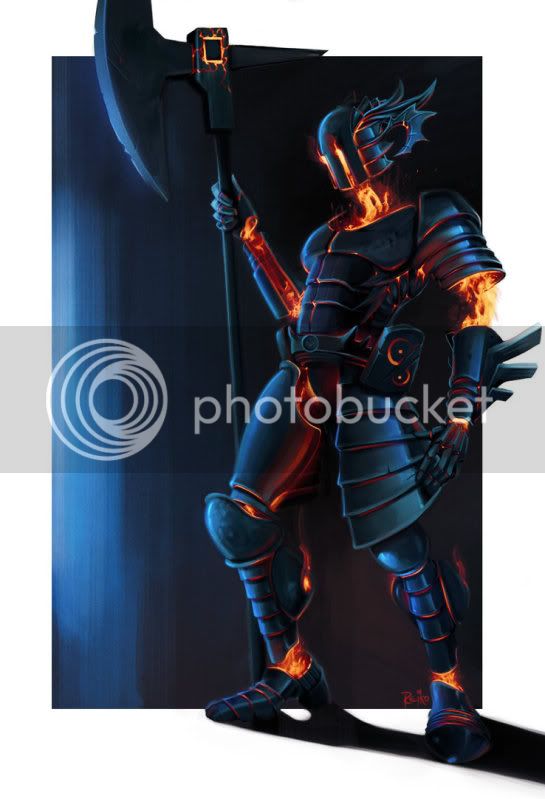 This is an example of one of their automatons. They vary is look and ability, but are usually some type of armor held together by a magical force. They are mindless, but brutally effective in combat. They are prized by the Magi for their ability to follow orders without hesitation, and with the kind of efficiency you would expect from a highly trained soldier.

The Magi are powerful, fearsome, and uncompromising in their pursuit of ultimate power. Those under their orders either follow out of the same desires, or out of fear for what might happen to them if they refused.

Next on the list, we have the Alliance of Zethrex. This faction is comprised of several of the larger nations who came together to stand against the Circle of Magi. They believe that no man should ever be allowed to possess the power of a god, nor do they even know if such a thing is possible. Whether it is or not, they believe that the Magi's goals are threatening to the entire world, and that they need to be stopped before they can cause any major harm to any other parts of Zethrex. The Alliance embraces the same magic and technology as the Magi, but they use it with much more respect. They treat magic as a powerful gift, rather than a tool to be exploited. While some may still take it for granted at times, they never forget how dangerous magic can be in the wrong hands.

This is a depiction of a standard Alliance soldier. Honor and conviction are what drives the people of the Alliance forward, and what gives them the strength to stand against the Magi without fear. While much more lenient towards their people and their beliefs, They are just as ruthless as the Magi when they take their place on the battlefield. For these brave men and women, there is no higher purpose than fighting for their fellow countrymen.

Last but not least, we have the 3rd and final faction of Zethrex. This faction is known as the Purgers. They are made up of a fairly large number of people from all across the world. This faction is opposed to any use of magic aside from what could be considered absolutely vital. They have seen, and most of them have even experienced for themselves, the wonders of magic and all that it can do. However, they have also seen the incredible danger that is inherent in magic, and they believe that the danger outweighs the benefits. They believe that both the Alliance and the Magi are guilty of abusing the power of magic. They believe that even though the Alliance claims to shun the ideas presented by the Magi, that eventually, even they would be consumed by the thirst for more power if they continue to abuse magic. 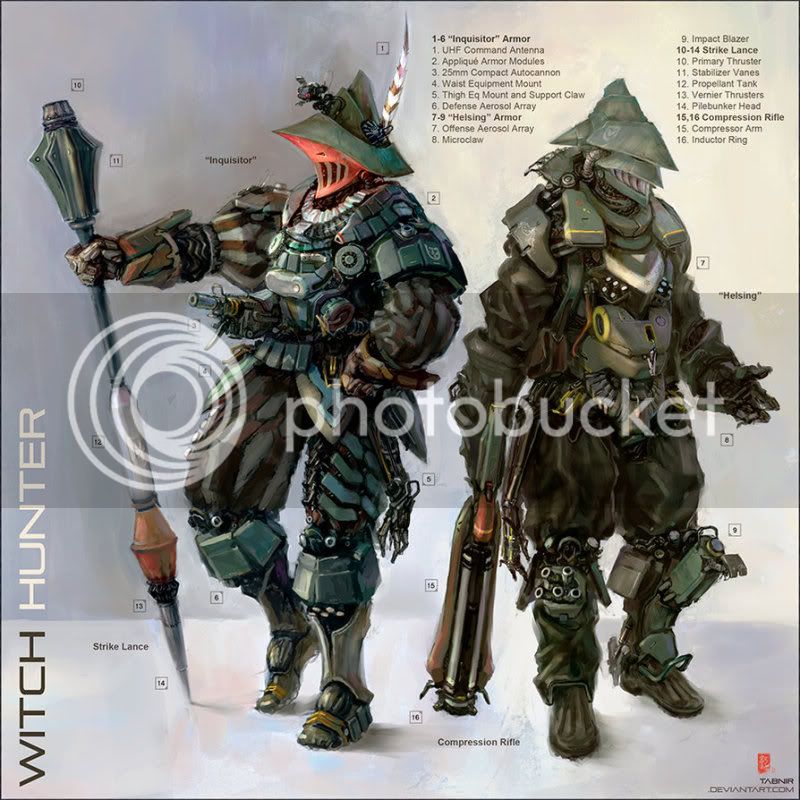 The Purgers have focused all of their effort into developing weapons and equipment designed specifically to counter magical attacks. while similar technology is in use by both the Circle of Magi and the Alliance of Zethrex, the Purger's technology surpasses them both when it comes to magic-countermeasures. Faced against a fully equipped and trained Purger soldier, any unwitting Alliance or Magi soldier could be easily tricked and disabled. It is worth noting that the Purgers tend to favor defense over offense on the battlefield. Outlast and disable the enemy is a common tactic for them.

However, what the Purgers lack is numbers. They are the smallest, population wise, of the 3 factions, though still a considerable size, and they have no home nation. This means that they are limited in their ability to organize large scale movements and share warfare intelligence. Nevertheless, the Purgers manage to make their presence known on any battlefield they decide to enter. Their goal is to put an end to the war with whatever means they can, and to end the world's abuse of the power of magic.


That's it for this chunk of info. I hope it will help everyone get a better idea of the setting of this RP and what faction they would like to join. Also, don't think that by joining this RP, you will be forced into every battle that happens. Not everyone has to be a soldier, but the option is there for those that want it. Also keep in mind, an official title for this RP still has yet to be confirmed.

Feel free to ask questions if you have any.

(Disclaimer: I do not own and did not create any of the pictures provided in this RP.)
S

Question on aesthetics feasibility... The artwork shown has the Automatons with some sort of energy bindings. Could they rather be clockwork mechanisms?

Would much rather see a clockwork magic boosted robot then a suit of armor that seems to have a ghost in it.
K

Yeah, that would be fine. Like i said, they vary in look and ability. Anything that resembles an armored unit without a person in it powered by magic will work.

Sign up with your character profiles on this thread!