what does "Empathy" mean as an ability? Also, what are you meaning by telepathy? Mind reading and speaking into minds, or including mind control?

Has Siobhan been discovered and captured yet? Or will that happen during the roleplay?

If she's already been captured then I'd like it if you included that in her backstory. 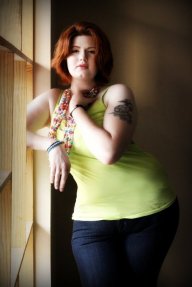 Yeah I realized I need to define these better for you. This should help...

Description of powers: Telepathy and Empathy

Telepathy Basic Level:
At this point I don't want to get to far past that but eventually I'd like the character to manifest the greater powers that come with higher levels.

Empathy is the power to fully interpret and replicate the emotions, moods, and temperaments of others.

[spoilerbb]
Capabilities
The user can fully interpret and replicate the emotions, moods, and temperaments of others without reading apparent symptoms, allowing them to understand introverts or discover one emotion is actually hiding another. They can attack someone in a personal and emotional way since they know exactly what emotion is flowing through themselves and can use this knowledge to play against them. Some users may learn to read emotional imprints left into environment or objects.
Usually over time, an Empath's power grows to the point that they can manipulate emotions on others, and possibly use them to empower themselves. User may learn to extend their power over/on vast number of sentient beings or reach extreme distances, even other levels of existence but this may be possible only if the user has emotional link to those they search already in effect.
Variations
Empathy has many branches of power. Ranging from very weak to very advance. As the user becomes more advanced those branches may grow. Here are some levels that other empaths have displayed having/may gain:

Clairaudience - Some Empaths have displayed the ability to not only feel emotions, but also "hear" the heightened thoughts associated with that specific emotions. This is probably due to the fact that both cortices (emotional and mental) so closely relate to one another. An example would be if an empath senses two spouses aiming a lot of hatred towards one another. The empath might get the echo of thought along with that emotion (E.g. "I cant believe he's cheating on me after all these years"). However this is not to be confused with Telepathy. An Empath can only get visionary "echoes" related to certain emotions. They cannot read full memories.

Clairempathy - More advanced users of empathy have shown the ability to sense emotions over great distances such as cities, countries, continents, and other dimensions and planes (The Astral Plane AKA The Emotional Plane).

Clairvoyance - An Empath forges an emotional connection with another being. If that connection stays opens, the Empath is able to sense when that person is in danger and is also able to locate them by their "emotional scent". To give you an better understanding of this, one could consider this the empathic version of "Vampiric Siring" (see "True Blood", "Buffy", "Moonlight", and "The Vampire Dairies" for an understanding of supernatural "Siring"). See also Sensory Scrying

Empathic Healing - This is a level that is somewhat rare and not many can master. When an Empath "heals" wounds that are physical they don't heal the actual injury. The Empath simply takes the pain into themselves so the victim no longer feels that pain. However, Empaths can heal emotional wounds, but healing physical wounds is somewhat uncommon.

Empathic Mimicry - Higher level Empaths use this power to tap into others' abilities. This is done by the Empath channeling someone and finding the exact emotion that triggers their power. The Empath, so long as they remember that emotion, is able to use/copy that person's power, and maybe even turn powers against their users.

Empathic Power Absorption - Highly advanced Empaths can steal the powers of others for their own by using an associated emotion, leaving the victim powerless.

Empathic Power Randomization - Powerful Empaths can gain random powers based on their mood and emotions (gaining Regenerative Healing Factor or Invulnerability when scared, or Enhanced Strength when angry).

Empathic Projection - Some Empaths can develop the ability to project their own emotions onto others.

Intuitive Empathy - Unlike Empathic Mimicry where the user simply channels and copies others powers, Intuitive Empathy gives that user the knowledge to know how to use the ability intuitively.

Lie Detection - Empaths can sense when a person is lying to them, as lying can cause an irregularity in one's emotions. More skilled users and pick out what that lie is and find the truth.

Psychic Navigation - Empaths can sense a person by the emotional wavelength they give off or "empathic scent".

Psychometry - There are some places that have constant emotional residue (due to major events happening in that location war, death, historical moments, etc.). Some Empaths are able to tap into those emotional (lower level users that enter these places are overpowered involuntarily) imprints and re-experience those emotions as if they were happening in that moment. If skilled enough, some Empaths can also see the emotional echoes (images/residual ghosts) still there. This would be due to high levels of concentrated emotional energy.

Techno-Empathy - Empaths can sense the emotions of machines and other technology.

Telempathy - Empath can not only sense others emotions, but they can also send their own emotions to others. Users can communicate with one another emotionally and if skilled enough send "echoes" (ie: it means a quick glimpse of an image, e.g. sending the emotion of love to another user and the receiver seeing an image of their loved one like a mother, child, or spouse) of images back and forth.
Limitations

May only be able to receive emotions

Might get taken over and act on those emotions.

Inexperienced Empaths may find their powers completely useless in a fight.

May not be able handle large amounts of emotions at once.

Defenseless against beings that have no emotions, such as robots or users of Apathy.

May be easily possessed by Spirits and Ghosts, as they are beings bound with emotions.

Definatly using the limitations for Empathy it makes for a better character.

May only be able to receive emotions

Might get taken over and act on those emotions.

Inexperienced Empaths may find their powers completely useless in a fight.

May not be able handle large amounts of emotions at once.

Defenseless against beings that have no emotions, such as robots or users of Apathy.

May be easily possessed by Spirits and Ghosts, as they are beings bound with emotions.

This does not have to be an actual power, but can be a skill/ability that can be developed, though it rarely reaches the same level as the actual power.

And no she hasn't been discovered yet but I was planning on her getting discovered in role play.

Mm, well I don't see much problems, so accepted. That makes four now, I think I'll start the thread once we get to six.

Hopefully I have plenty of time to think of how the facility is laid out.

So how old is everyone?

I did not set my age because i wanted it to be around everyone else.

Not sure really, probably should have put that in the character sheet, but too late now. Oh well, it doesn't really have to be around everybody's age, you can just pick one.

Depending on the theme of the story and what not, It is sometimes nice to have everyone around the same age.

What fun is playing a 12 year old in a slice of life when everyone else is a 20 year old adult.

Since we have 2 female characters who are 18 and 20, that makes the RP more adult like. So I would want my character to be between 17-23 especially since I am a guy.

It looks like you copied and pasted those advanced abilities from the superpowers wiki, so some tailoring is probably in order. I know it's not my place to say here because I'm not the GM, but some of them aren't appropriate for a roleplay, for example Mind Control. This is one of my pet peeves ever since someone used it in an RP a couple of years back. Mind control takes all the fun out of the RP for everyone that isn't the mind controller, so if there's someone with mind control, I tend to either ignore any of their posts that involve said ability, or leave the RP all together. This is however a rather immature thing to do, but it's better than starting arguments and getting banned, so...

Nah, Karakui, you're right, and I should have said something about the mind control ability at first, would be nice if you removed such a power from possibility, Amalthia.

It is the exact copy pasted list from the super power wiki, so it's literally a list of every mind-based ability that has ever appeared in comics, manga or fantasy novels. Given the sheer quantity of those that exist, I can forgive not going through and reading them all and selecting which ones will work and which ones won't.

Okay, I took an actual look t the abilities listed, and these are the ones I would prefer that you get rid of, or at the very least restrict, please.

I feel like my character is weak T-T compared to you all now lol.

Can i start the RP off with like 90 rarecandies

Psh, my character hasn't killed anyone, I'm sort of feeling she's the weakest one of the lot currently, but that's good, it fits her, and there isn't much of a chance of her being called "overpowered" ;) Don't worry.

You can make people die for you >.>
because they fall so madly in love

But more seriously if she used her power to make people fall in love with her it would surely come tumbling down as the person realizes that the Katelyn they saw before was just a fake, an illusion.

And thats when they kill them selves >: ) when their fantasy don't exist....


JK
that would be so mean.

Both transformation of body parts and sensory manipulation can be incredibly powerful if used correctly. With partial transformation, your strength increases with your speed. The faster you can switch between, the stronger you are. With sensory manipulation, you can create hallucinations in your opponent's mind. Since touch is also a sense, you can create hallucinations of that too - force your opponent's body to think it's just been impaled by a 10 foot lance. While it hasn't ACTUALLY been impaled by a 10 foot lance, the pain would be the same, and such intense pain is enough to kill children through the shock alone. An adult might take an 11 foot spear to kill.
Show hidden low quality content