Venice in the summer. Nothing like it. The moonlight gleaming off the rooftops. The women on the streets. And the smell. Nauseabondo. But Ezio Auditore was on a different kind of hunt than the one for donne tonight. No, he was sprinting along the rooftops, panting as he chased a thief, a thief that had had the gall to steal his purse. Not all of it thankfully, what with him learning to spread it among multiple pouches, but a good deal of it. Enough to make him want it back, not that he didn't enjoy the exercise for its own sake.

He skipped over the cobblestones with the confidence that only a lifetime of running the rooftops could give. Maybe an overconfidence it would be safer to say. His foot slipped on the slick top of a chimney as he tried to hop from it to next roof below, sending him glancing off the edge of the roof and into a less than happy pile of robes and flesh on the backalley below.

It wasn't a short fall, and frankly he didn't quite feel like getting back up for a minute. He just lay there, thinking about the events that had led to him coming here. No, not in the metaphorical self examination of his own journey through life and its impact on others, rather the literal events that had led him here. The fight at the enoteca, spilling out onto the streets in a group brawl. The small, scurrying man that had bumped into him, then ran away at a glance. Ezio not realizing what the man had done because a great giant of a Venetian that had chosen to make his head the target of a rather large fist. The more than slight daze as he had shook that off and proceeded to beat the owner of the fist into unconsciousness, and then the dawning realization that he'd been robbed when he went to pay for the damages.

Then stalking through the fading light for a glimpse of his target, sometimes looking through his mysterious second sight he'd never been able to explain, the one that colored the worlds in shades of red, blue and gold. Catching his trail, then the long, long chase through the streets and the rooftops. And then finally back to here, lying in an extremely sore heap that probably needed to get back home and sleep it off. As he sat back up groaning, something caught his eye in the distance. A ledge atop a high building. He simply couldn't resist, never had. 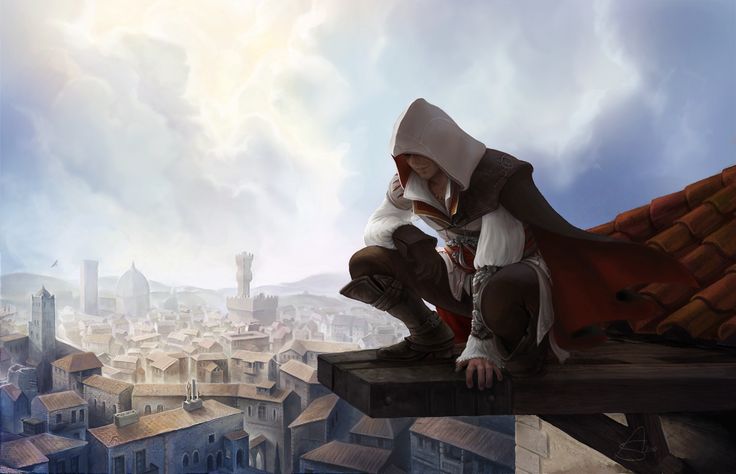 Several minutes later, he was perched back on the rooftops of Venice, even farther above the city streets this time. I suppose that was what it was to be an Auditore, to be knocked down, and then simply get back up higher than before. He sat there for a long moment, taking it all in. And then he leaped, a leap of faith straight into a bale of hay. The mark of an Assassin that didn't even know it yet.​

Original poster
The room was dark but with a few candles that flickered by the slightest blow of air. The girl on the other hand, only a blanket was covering her small frame. The red stain of blood soaking through the covers and wrap that Teodora had used, but the damage was done, because of the blood loss she was fading in and out.

"Oh God above help this child."

The wound was indeed pretty bad, but it was the blood loss that the girl was worried about, the artist was indeed on his way. But she was sure the girl was determined to survive. Giving the young girl a soft stroke of her fingers over Alexandria's forehead, although she was slightly disturbed that the clothing she was wearing... The symbol that she had bore, she knew of that symbol from Ezio's own threads. Although his was never a soft pastle blue with tints of white and silver. What Alexandria had stumble near before she passed out was none other than the La Rosa della Virtù ("The Rose of Virtue") and its head courtesan Teodroa.

The La Rosa della Virtu was founded and run by former nuns, and thus the Pope repeatedly tried to have it closed. Despite this, it continued to operate til this very day.

Alexandria curled herself more as the woman above her spoke softly about her fate, part of her slightly confused as she roughly rested for no more than thirty minutes. Her mind slowly coming to before Alexandria could even open her eyes. When she did her eyes were on her hands, examining the blood that was slowly drying up leaving behind only the sting on her arm was still there. Pressing her thumb over her wound as she tried to sit up her gulps of air were rapid and deep in her desperation to not cry about the pain, hoping that the wound would heal up eventually.

She heard a rather loud thumps of someone coming, her head snapping towards the direction of her door. There stood a very familiar man, making the woman smile slightly through her pain.

"Give me your arm Alex” She heard the man command, to which she hesitated, she felt his hand grab her wrist and yank out before he pulled out the roll of bandages and some alcohol, the sterilizing was painful but she looked away, not because it made the sting lessen but she was actually ashamed to look at him.

She looked up for only a moment as he offered her to take a swig of the alcohol and wrapped her arm up tightly.

"Shh, I don't want to know why you are here in Venice when you should be back home in Rome. But I have to make you promise me that you will stop by my workshop again, so that I may at least check over your wound in the morning. Drink more, it will help you sleep."