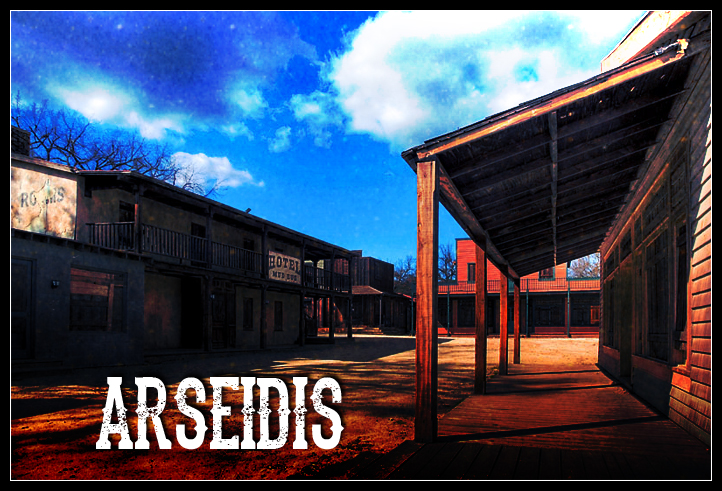 ARSEIDIS: TIMEWARP
Sep 1, 2022 at 2:00 PM ​
Founded on the edge of a forest in northwest Wyoming by two business men hoping to establish trade and mining in the area, Arseidis was meant to be a bustling new community. Instead, within ten years it became overran with the worst of the worst in villainy and vagrants. Then one day in the late 1880s, without warning or explanation, everyone in town was gone. Of course locals assumed that the violence and lack of work eventually drove people out of the town, but urban legends of hellmouths and curses flourished. Eventually the town faded from people's minds, the properties sold, the area forgotten.

Come to present date, the property has been inherited by a last living relative and by chance the abandoned town was discovered. With Arseidis' rich history (and an offer of a great deal of money), the owner has allowed a nearby University sole access to the property for study and investigation.

...You have awoken in Arseidis. You don't know how you got here. It sure doesn't look like the Arseidis you remember. How long have you even been here...

WHAT: OH SHIT IT'S A TIME WARP ALT DIMENION? You can be from any time, any where. How did you get here? How will you get back to where you belong!

Do not take events in the roleplay personally or assume that bad reactions are because they think you/your character sucks. Everyone is playing a character and reacting to things as their character would!
Last edited: Jul 14, 2022
Reactions: Zarko Straadi

Senli was abandoned on the steps of a Buddhist convent as a baby. She was raised by nuns, and taught Wushu, Tai Chi, and Wing Chun martial arts, including the use of the jian (Chinese longsword), bladed chain whip (a long chain with a crosswise handle at one end and a small blade at the other), "iron flute," fan, chopsticks and staff, along with other traditional arts such as calligraphy and the flute (music). When she was 15, a corrupt Qing magistrate claimed that the convent was a hotbed of sedition, but what he really wanted was to pillage it and sell the women into slavery and prostitution. He attacked with a military detachment, and in the chaos, Senli escaped.

She began a career as a youxia, a wandering righter of wrongs. In addition to fighting ordinary criminals like bandits and opium dealers, she began a patient, subtle campaign against the magistrate. One by one, she exposed the corrupt dealings of his political allies, and got them removed from power or dealt with them herself. Finally, the magistrate himself was brought down. However, he had placed a high bounty on her, and a gang of martial artist assassins had offered to capture her for him. They tracked her down and overpowered her, but when they brought her in, the magistrate was gone, and with him, the promised bounty. Hoping to get at least something for her and get rid of her for good at the same time, they sold her to a foreigner who would take her far away from China: a British dealer in opium and human trafficking who bought her to be someone's exotic and expensive mail-order bride.

Her British captors did not know about her martial arts skills, and she did not use them to defend herself when they abused her during the long trip across the Pacific. When her ship reached San Francisco, she was able to break free, steal back her possessions (which the opium dealer had intended to keep as exotic souvenirs), and make her escape. She headed out into the frontier, where she could resume her path as a youxia, and perhaps someday find students and form a convent or monastery in some faraway, isolated location. Alone in nature, she found peace and recovery, until she found her way to a tiny town named Arseidis.

Weapons: Staff, jian (Chinese longsword), bladed chain whip (its blade is an elongated teardop with the chain attachment at the wide end; it is sharpened along the forward edges and point, and decorated with a yin-yang and Chinese characters for her convent, so that it can be worn disguised as a necklace). Her flute is made of steel, and she knows martial arts techniques that use it as a weapon; she can also weaponize her chopsticks.

Due to the server being unstable today, this charp has to be rescheduled! (We don't want it to go down again in the middle of the charp.)

March 22nd is our new playdate for this one. 8D