Original poster
"Nestled deep within the bosom of Aokigahara Forest of Honshu, Japan sits a humble, stone shrine, surrounded by blissful kodama. Within this shrine, only accessible by the will of the supernatural, is a pocket dimension devoted to the education of Yokai children from grades 10 to 12. The haunting facade of the forest, along with its reputation, helps keep less desirable humans from veering from the tourist path and nearing the shrine. For those Yokai who feed upon the dead, those who willfully enter to never return are never in short supply." 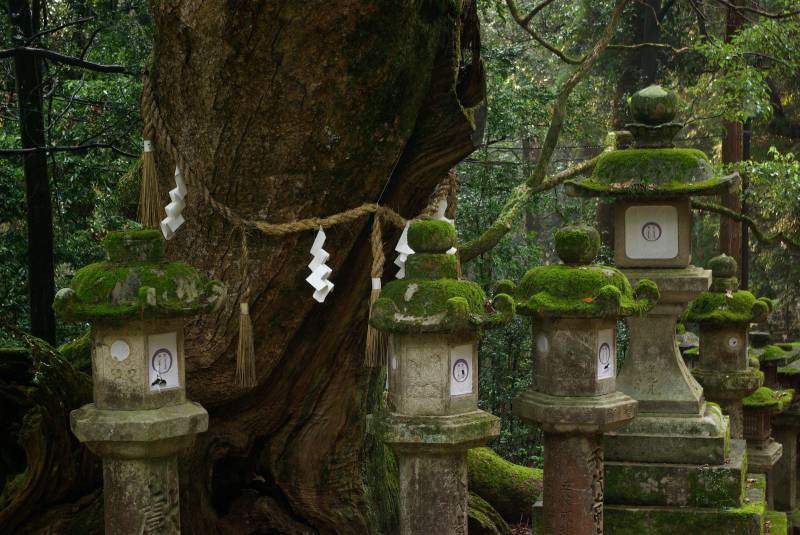 The first day of the new school year is about to start as Yokai students, old and new, flood through the gate and walk the path to the high mountain-top academy. This grand plot of lush, garden land is not connected to any other chunk of earth. In fact, it's floating in its own space, the sky full of magnificent colors when not lit with the daytime. Around the base of the mountain sits the student and staff dorms, a few extracurricular class buildings, and a grand courtyard that tends to all types of creatures.
After climbing the path upwards lined with blooming cherry blossom trees, greenery of all sorts and welcoming will-o'-wisps, students are greeted by a few members of staff, including the principal, a mighty, intimidating hakutaku.
"Welcome back, welcome back! Please head to the main hall for our start-of-the-year assembly."
The lone chimi janitor jerks awake when students begin marching past his resting place under a stone carving.
"Ghh! How long have I been sleeping?"

Original poster
Name: Haru Honda
Age: 18
Gender: Female
Species: Futakuchi-onna
Year: 12
Status: Returning Student Body President
Bio: Haru is a picture perfect example of a student body president, in fact, she's been in this position since 10th grade. A natural leader, she's a new student's go to source for information. Her second mouth, who she refers to as Ken, has a mind and voice of his own. Much more straightforward than his counterpart, if Haru gets in trouble, it's because of Ken.
Image Reference: 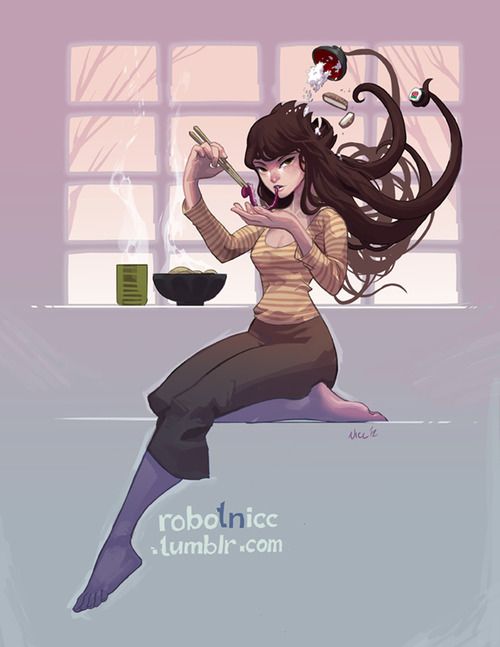 Name: Kyōrinrin-Shisho
Age: 350
Gender: Genderless
Species: Kyōrinrin
Position: Librarian/ Bookkeeper
Bio: Ever since this Kyōrinrin's creation, it has been the embodiment of knowledge, loved its fellow parchment, and absolutely loved itself. Mess anything up in its library and get an ass beating.
Image Reference:

Name: General Saji of the Aokigahara Division
Age: 6
Gender: Male
Species: Seto taishō
Position: Cafeteria "Guard"
Bio: As much as the cafeteria staff tries to use all of their equipment to prevent this exact occurrence, some older china was pushed to the back of their cabinets, and this little nuisance came to be. While he wishes to have an actual weapon, all he is allowed to carry is a soup spoon for the safety of those around him.
Image Reference:

Name: Etsuko Koizumi (Koizumi-san)
Age: 73
Gender: Female
Species: Hone-onna
Position: Guidance Counselor
Bio: A kind woman from beginning to end, and even beyond that, Etsuko is passionate about helping students with any problems they may have. She's known for her friendliness, amazing ability to remember names and details about her students, and the candy bowl she keeps in her office for visitors. She prides herself on considering herself a friend for everyone, ergo she lets everyone address her as the slightly less formal Koizumi-san. All yokai see her as her skeletal form.
Image Reference: 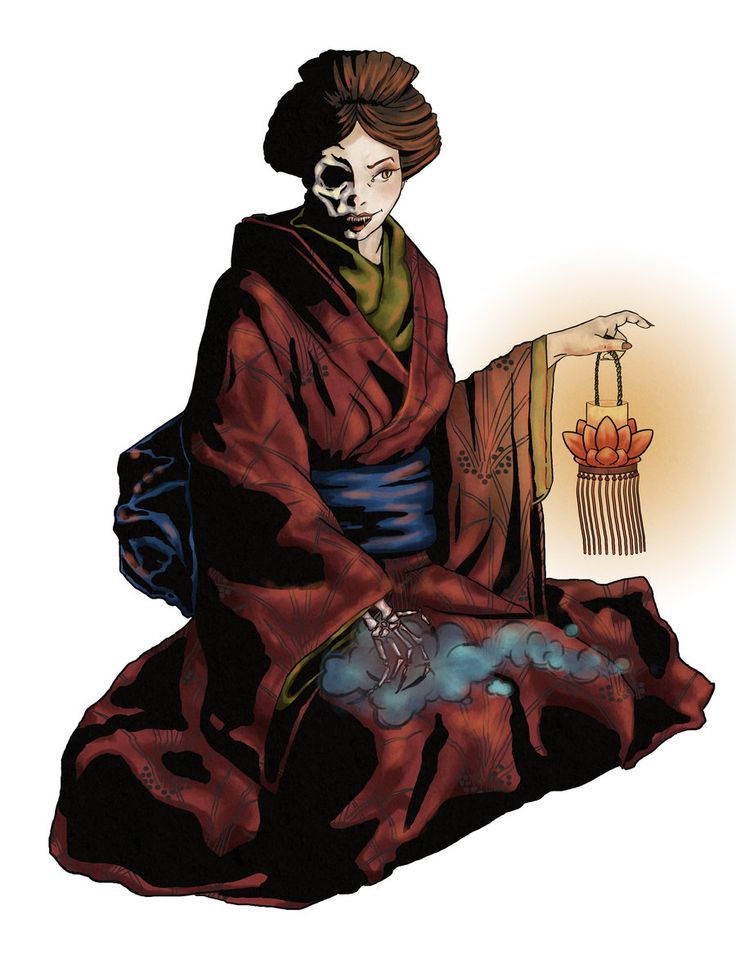 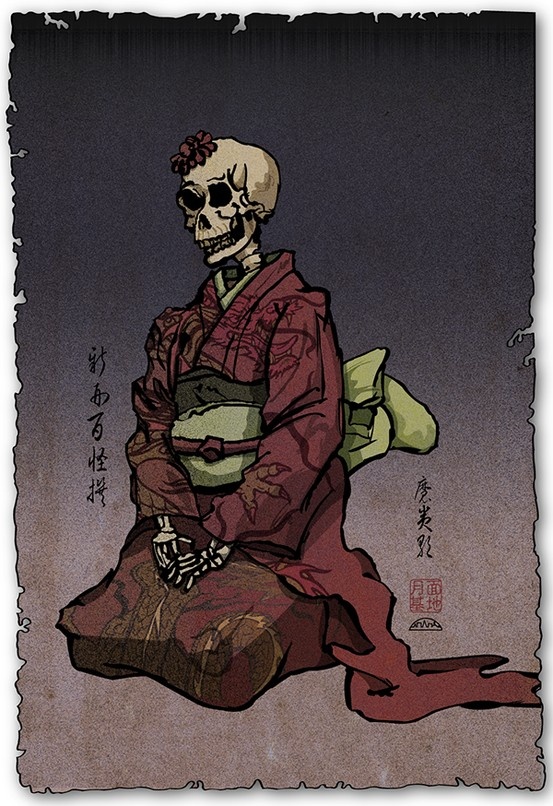 Name: Masaru Matsuoka (Matsuoka-sensei)
Age: 45
Gender: Male
Species: Tanuki
Position: Disciplinarian
Bio: A gruff voice and a body the height of their average 10th grader doesn't strain this Tanuki's fierce reputation among returning students. He's very good at getting students to follow the school rules and enforcing safety, but with what he's seen, it isn't because he's mean. It's out of love from a teacher to their students who have to face a world that most likely resents them.
Image Reference: 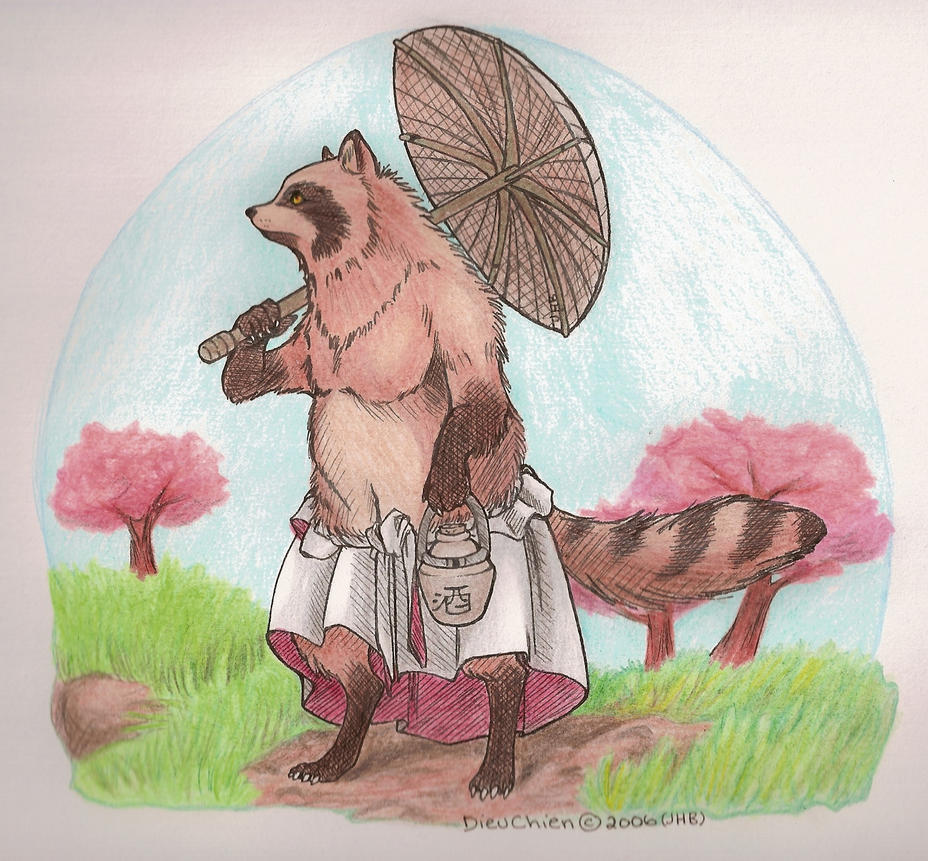 Name: Hiroshi Tsukuda (Tsukuda-sensei)
Age: 2,570
Gender: Male
Species: Hakutaku
Position: Headmaster
Bio: A scary looking but jolly yokai, Hiroshi loves his students, his school, and his life. He's had to protect the shrine on more than one occasion and he's completely prepared to do it again and again. He's known for his booming voice and his wide, almost permanent grin.
Image Reference: 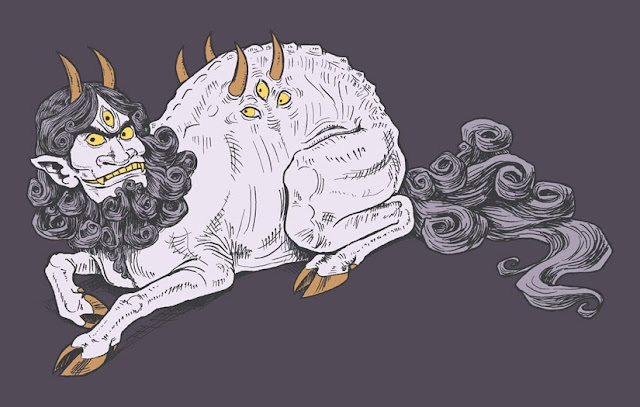 Names: Aokigahara Academy Swim Team Champions (Masaru, Nobu, Nori and Yori)
Ages: 17, 15, 16
Genders: Male
Species: Suiko, Kappa, and Garappa
Years: 12, 10, 11
Statuses: Swim Team Captain and his clique
Bio: This group of boys are at the top of the swim team. Masaru, the oldest of them, is the leader for a reason, as he is an intelligent and aggressive one. The twins Nobu and Nori, the youngest of the group, stick to their leader as if he were fly paper, almost always willing to do his bidding if they aren't already causing mischief on their own. Yori, the middle boy in age, not height, is a bit slow, but not as dumb as he may look. He excels in math and coordination, and uses them in conjunction with Masaru's leadership skills. 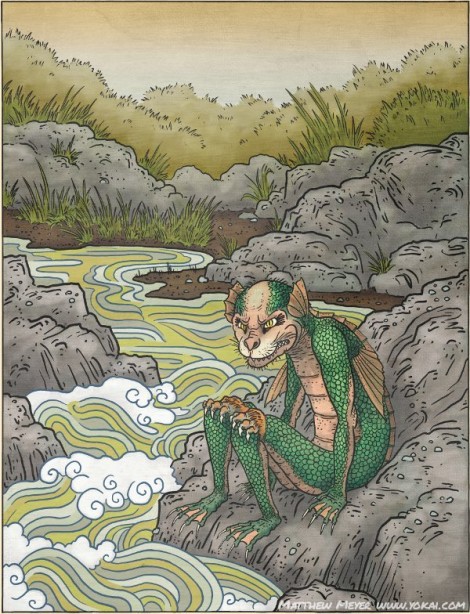 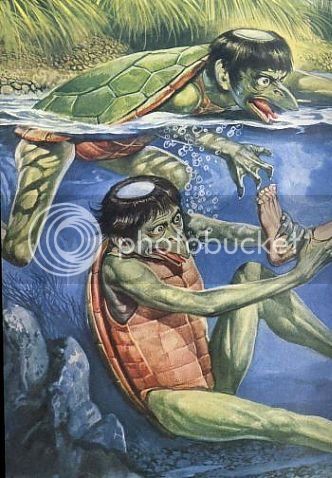 A quick question: would figures in Shinto mythology (i.e. Tsukuyomi, Suijin, Amaterasu) and their offspring be eligible for characters?
L

AceSorcerer said:
A quick question: would figures in Shinto mythology (i.e. Tsukuyomi, Suijin, Amaterasu) and their offspring be eligible for characters?
Click to expand...

I'd rather keep them all basic yokai because unique gods and their children being thrown in the mix would create a power imbalance!

The idea I was having was Tsukuyomi serving as the headmaster. Would that work?
L

AceSorcerer said:
The idea I was having was Tsukuyomi serving as the headmaster. Would that work?
Click to expand...

The headmaster/principal is the beforementioned hakutaku. You could certainly play him if you'd like, however, as he doesn't have any set info besides his species and the position you were seeking. 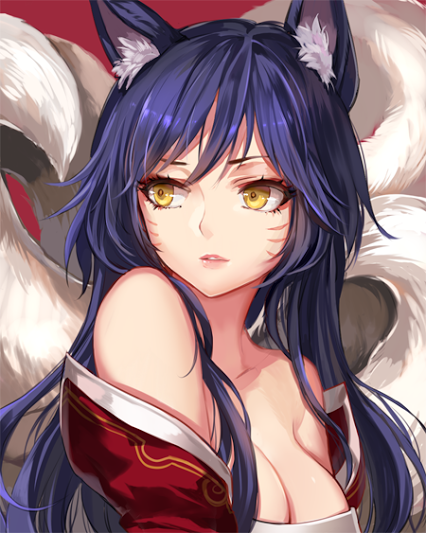 Name: Mizuki Saito
Age: 18
Gender: female
Species: Kitsune
Year: 12
Status: returning student and the captain of the music club
Bio: Mizuki was born into a noble household. Her family was noble only in title, since the real head of the Saito family had long since been killed. The real Master Saito was killed by a Yokai trying while he was on a business trip through the mountains. Before he died to came across a Inaris Shine, and prayed to the deity that his childless wife not become a widow. Mizuki's father, a faithful servant of Inaris, was granted the man's memories and was given direction to take the man's place until the wife's death. Mizuki's father, Ren, did just that. Her mother, Kazaki, never knew that her husband was a Kitsune. Mizuki could always remember paying her respects to Inaris, and never thought anything of it. She excelled in human schools, and has a passion for music and poetry. Her family's household did well, and everything seemed to be going great. It was not until her mother's sudden death, that Mizuki's world turned upside down. After Kazaki's funeral, Ren told her the truth. It was Inaris's blessing that veiled Mikuzi's true form from those who see her. Mizuki realized that that was the reason why there was never a mirror in the house, and that other than the household's portrait, she could not remember ever seeing herself. Ren broke the news to Mizuki that she had to go back to Inaris's Shrine with him, to learn how to control her abilities. It was through luck that Mizuki was born a Kitsune, and not a hybrid or human. Now, after 5 years of living at the shine, and four years of going to Aokigahara Acedemy, Mizuki can now control her shape shifting and other abilities very well. Mizuki is the captain of the music club, and is a top ranked academic.
Image Reference:​
Left: full body (only has one tail)<br /> Right: fox form

Are Western or Chinese beings allowed?

Bio: One of the school's top academics, the young tatsu is an embodiment of the values of traditional and historic Japan. This is partially due to the tatsus' timelessness as a whole, as well as their hiberations. As a yami no tatsu, his powers extend from that over the standard domain of a tatsu's powers and extend into controlling the aspects of the night and the shadows. 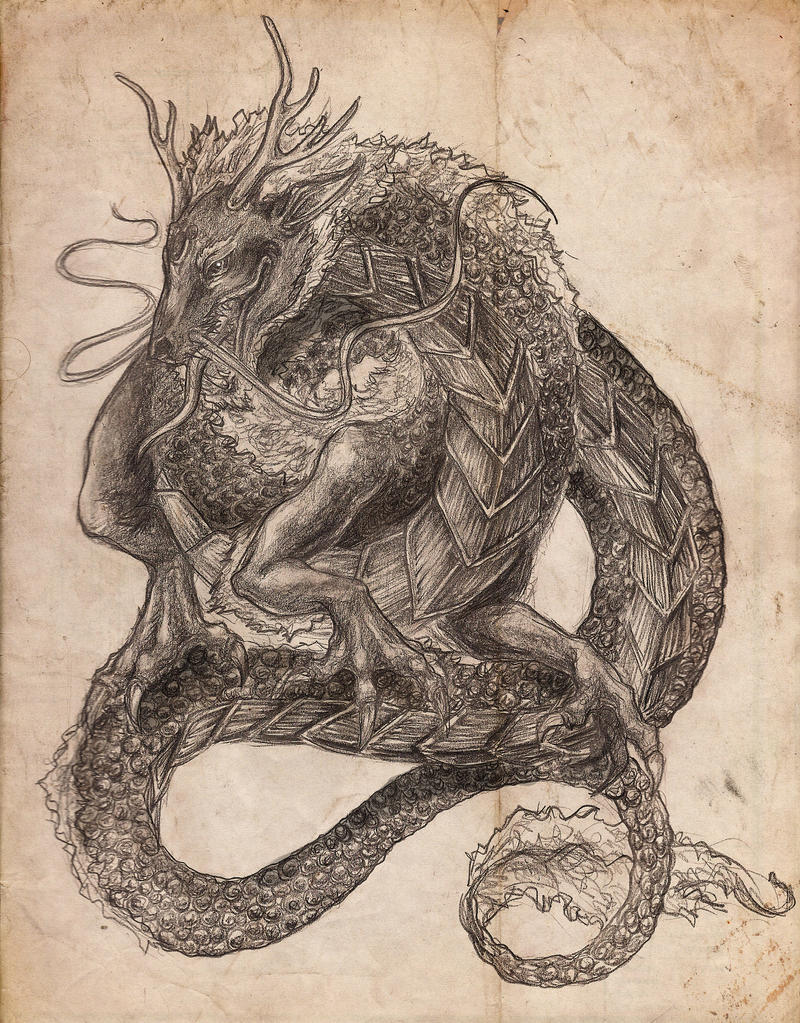 I believe she linked out acceptable yokai in her first paragraph to a website.
L

koolkat4595 said:
I believe she linked out acceptable yokai in her first paragraph to a website.
Click to expand...

Crow That site doesn't cover /everything/, there's too many species to list! But I was actually going to open it to a few "exchange students". The player would just have to keep in mind that Japanese would not be their first spoken language, which may give the student slight errors in communication!
Last edited by a moderator: Aug 10, 2015
L

AceSorcerer are both accepted! Welcome to the RP!

Crow That site doesn't cover /everything/, there's too many species to list! But I was actually going to open it to a few "exchange students". The player would just have to keep in mind that Japanese would not be their first spoken language, which may give the student slight errors in communication!
Click to expand...

So would something like a Dullahan, Valravn or even a Jiangshi be alright for a transfer student?
Reactions: koolkat4595
L

Crow said:
So would something like a Dullahan, Valravn or even a Jiangshi be alright for a transfer student?
Click to expand...

They look fine to me!
Reactions: koolkat4595
K Age: 14
Gender: Female
Species: Oni
Year: 10
Status: New
Bio: As the first representative of her clan to attend Aokigahara, Kanna descends the mountains she calls home to bring the boisterous culture of her kind to the forest of Honshu. Although she has changed her name and wardrobe to fit in with the more civilized of yokai of the academy, Kanna still drags with her a gourd filled to the brim with saké, a gourd that is heavy enough enough to crush a grown man under it's weight. She is excited to learn and make new friends, but Kanna will have many challenges ahead of her if she plans to claim a place in a world so unlike her own.
Image source: Here.
[/fieldbox]
Last edited: Aug 10, 2015
L

Original poster
We're going to start once we get some staff in. Feel free to play more than one character, as well, as I'll be playing the majority of NPCs.

After i finish my first CS (and my math work) i will be making a staff member, since this RP seems like it will be very interesting. i am in alot of RPs but all of them are dragging thier heels with posting and i can be available to post severial times a week unless my workload changes.
L

koolkat4595 said:
After i finish my first CS (and my math work) i will be making a staff member, since this RP seems like it will be very interesting. i am in alot of RPs but all of them are dragging thier heels with posting and i can be available to post severial times a week unless my workload changes.
Click to expand...

Ah, same! I like to be able to post multiple times a day and not have to wait days to get a response, lol. Obviously not everyone can always post all the time but I'm a very finicky person.
K

lucarionme said:
Welcome to the RP, @Kestrel !
Click to expand...

As for posting frequency... I'm not going to make multiple a day by a long shot. Not sure how the IC will work out, but I'm warning ya'll in advance.
Show hidden low quality content